“Down Syndrome Is The Last Thing That Comes Into Our Mind While Raising Her”: Kavita Baluni, Proud Mamma

Meet Kavita Baluni, who adopted fifteen month old Veda who has Down Syndrome. Kavita reinstates our faith in humanity and brings home the fact that you do not have to give birth to become a mother.

‘A family isn’t made from blood, it is made from love’.

This phrase indeed seems true when you come across Kavita Baluni, who became an adoptive parent to a little girl with Down Syndrome. Motherhood is a special feeling and there is nothing like holding your new born for the first time. But, there are some mothers like Kavita who believe that there are so many children out there who yearn to be embraced by a loving family. To be a mother, you need not necessarily give birth to a child.

Usually, couples who choose adoption are those who cannot have a biological child of their own. And then, there are people like Kavita, who, at twenty seven became a proud parent to Veda. Little Veda has Down Syndrome and she has now found a family which has bestowed her with unconditional love and filled her life with joy. Kavita has set a brave precedent by adopting a child who not only needed a home but utmost love and care. Kavita’s journey is nothing but inspirational and reinstates our faith in humanity.

I wanted to know more about Kavita and Veda’s journey so that more and more people can see that to create change, you have to start with yourself. 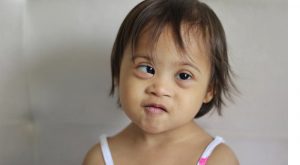 What made Kavita the person she is today?

Kavita is a former HR recruiter who is married to Himanshu for the last six years. She has even dabbled in teaching pre-school children. Well, that explains her love for kids.

She says, “I was raised just like any other girl in the society to get good education, then a job and finally getting settled in a family. It made me feel really bad the way girls are treated in our society. How everything is already decided, what’s good what’s bad for them without their consent. So, I had this thought that it would be great if one day I would be able to give a girl a home, a family, an environment where she can live freely and be whatever she wants.”

Her husband was her pillar of strength

Kavita had a strong urge to adopt a child, long before she tied the knot with her husband. So, when she met her future husband she was forthright and shared her thoughts with him. She was overjoyed when he acquiesced to her dream of adopting a girl child. And the rest as they say is history. Himanshu, Kavita’s husband supported her decision whole-heartedly and this speaks volumes about him not only as a husband who stood by his wife but also as a person who did not shy away from bringing a positive change in the society.

Why adopt a child with Down syndrome?

Kavita always wanted to adopt a child. But, never did she think that it would be a special child. In her own words, “We were in the US when we came across some kids with Down Syndrome and then after thinking through and learning over a couple of weeks about it, we decided to move ahead with a plan to adopt a baby girl with Down Syndrome. Basically, we couldn’t find a single reason why not to do so.”

Kavita and Himashu were residing in the US and so when they made up their minds about adoption, they came to know that they could not possibly adopt while staying in the US. Indian citizens staying in US are not eligible to adopt. Determined to go ahead with adoption, they decided to move back to India. And so they moved to India without worrying about their career and lives in the US. Kavita says, “For us this step was our utmost priority so career growth never came into mind as a roadblock for our decision.”

In India, adoption is considered a taboo and people still frown upon it. It is considered an acceptable thing if at all a couple fails to have a child of their own. In Kavita’s case they were not adopting because they could not have their own biological child. Moreover, they were to adopt a special child. Hence, they knew from the start that it would be a herculean task to convince their respective parents and bring them on the same page. Kavita adds, “We did let them know about our decision once we got registered under CARA(Central Adoption Resource Authority) but didn’t asked for their permission. Adoption is a decision of a couple as they need to raise the child and take care of him/her. As it was our mutual decision so we never thought of convincing them. They have eventually come along our decision.”

Challenges they face as caregivers to a child with Down Syndrome

Kavita mentions that raising a child with Down Syndrome has its share of ups and downs. “Of course there are challenges growing up a special need kid. We are working on her muscle tone primarily. She is going to a Physio and Occupational Therapy. When it comes to future, we know there will be challenges in her academics. She might have intellectual delays, milestone delays and speech delays.” 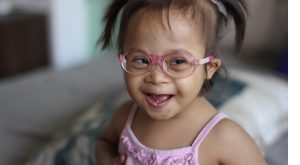 Like any other mom, worried for the well-being of her child, Kavita quips, “We currently do not have any plans right now. We are just taking one day at a time and letting her grow and learn at her pace. With each passing day we are just trying to make her more independent and happy. What matters the most is that she is happy and healthy. Down Syndrome is the last thing which comes into our mind while raising her.” Veda is indeed a lucky girl to be blessed with wonderful parents for whom she means the world.

Process of adopting a special child In India

The adoption process for bringing a special child to your home is similar to adopting any other child. It involves:

Are children with special needs catered for well in CCIs across India?

There are innumerable CCI(Child Care Institutions) across India. I wonder if children with special needs are catered to and looked after well in these institutions? When I asked Kavita, she said, “We cannot speak for every single institution but in our case our kid was not in great shape. Although the agency’s environment seemed fairly good, but, the care for special need children was definitely missing. I believe the reason behind that is the lack of knowledge which lead to the ignorance towards the condition.” If you go by the findings of a recent news story which attempted to delve deep to find out if CCIs across India are well- equipped to look after children with special needs, there are a very few CCIs that can actually look after special children and children with disabilities. As a result, many children with severe disabilities are sent to regular CCIs. For special children, intervention at the right time plays a vital role in their growth and well- being. The deplorable state of affairs is indeed appalling.

Do not fear if you really want to adopt a child

I earnestly wanted to know what Kavita had to say to the many women who would definitely look up to her and be awed by her selfless act of love. She happily adds, “I would like to convey this to every women, if you want to adopt a child and feel it’s right then go ahead with your decision without any fear. If you think you won’t be able to adopt after marriage because of your husband’s will, then discuss it before getting married.”

Kavita Baluni is a trailblazer and an inspiration, who has shattered many stereotypes that are embedded deep down in the society. She not only adopted a girl-child in a country obsessed with male progeny, but also opened her home and heart to a special child thereby reaffirming yet again, that love indeed surpasses all. We sincerely hope, there are more like her.