After the delightful Ravan and Eddie, Kiran Nagarkar comes forth with Jashoda, an insightful book about a poor yet strong woman's struggle against her 'fate'. 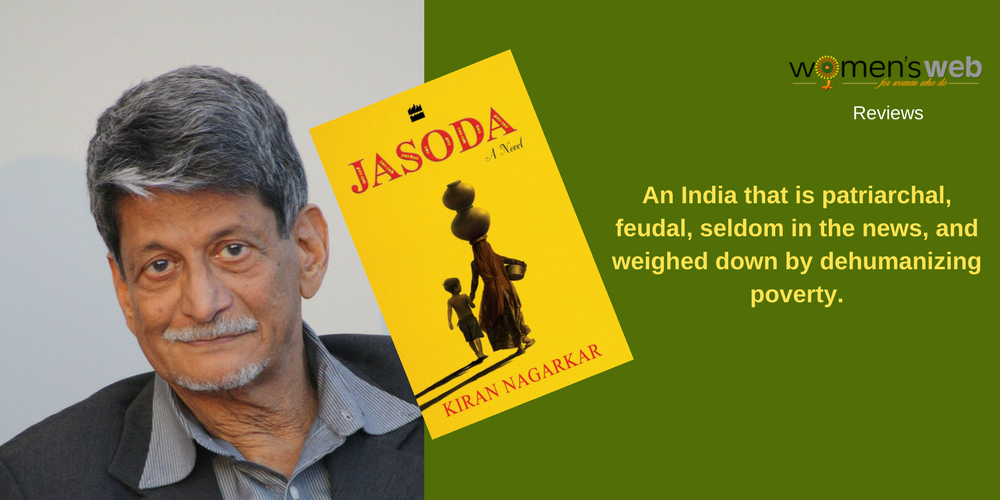 After the delightful Ravan and Eddie, Kiran Nagarkar comes forth with Jasoda, an insightful book about a poor yet strong woman’s struggle against her ‘fate’.

I met Jasoda while browsing through books at an airport bookstore. I was intrigued by the blurb.

This is what it said:

“Paar – ‘mirage’ country, where it is often impossible to draw the line between reality and illusion – has been suffering from a decade-long drought. Jasoda is one of the last to leave this ‘arse-end of the world’ with her children and mother-in-law. Since her husband claims he has important work to do for the local prince, Jasoda must make the journey to the city by the sea on her own. Meanwhile, after years of anonymity, Paar seems poised to take off. Will Jasoda return home with her children? Or stay in the city that’s become home for her children? It’s taken for granted that epic journeys and epics were possible only during the time of the Mahabharata, the Odyssey, or the Iliad. Even more to the point, the heroes of the epics had to, perforce, be men. The eponymous Jasoda of the novel is about to prove how wrong the assumptions are. Kiran Nagarkar’s trenchant narrative traces the journey of a woman of steely resolve and gumption, making her way through an India that is patriarchal, feudal, seldom in the news, and weighed down by dehumanizing poverty.”

I was really interested by then. I turned the pages to read the Prologue.

Those two pages left me completely shocked and intrigued. Who is this Jasoda who singlehandedly delivers her newborn under a tree, and then kills it with the utmost nonchalance when she finds out that the child is a girl? And all this in the presence of her two year old son, Himmat! I knew I needed to read more about a character like this.

Social aspect: the oppression of women

I had watched the movie Parched just a few days before I started reading this book. The oppression of women, the violence against their bodies and minds, the toxic masculinity to the point of normalizing female infanticide, everything in this book reminded me of the movie. It also made me realize once again how such villages still exist in our country where leave alone women empowerment, there’s not even a trace of freedom or agency that a woman should enjoy as a human being.

If the woman belongs to the untouchable community, then any upper class man can abuse her body and cause her unimaginable suffering whenever he wants to. Even if she belongs to an upper caste, her primary duty is to produce sons and if she fails in this respect, she is abused and cast aside for another wife. All this while the man abuses the woman at his will, and rampantly engages in sex outside marriage as and when he feels like.

Jasoda’s husband Sangram Singh works in the royal palace of Paar. Sangram Singh is greedy, selfish and cruel, someone who doesn’t care about the family but knows when to assert his rights as a man of the house. Violence against women come naturally to him and all he seeks is currying favor with the Prince of Paar.

Jasoda and her family are one of the last few people to leave the drought stricken Paar in search of a better life, elsewhere. Sangram Singh stays back in the royal palace with his own agenda.

The story spans decades, and hence we witness changes of fates in the hands of Karma with the passage of time. A life of struggle and harsh realities await Jasoda and her family in Mumbai. What happens to her and her sons? What does fate hold for the cruel Sangram Singh? And the royalty of Paar? All these threads in the narrative are intertwined with great skill by Kiran Nagarkar, whose Ravan and Eddie trilogy will be known to most readers of Indian fiction.

Though the novel is entitled, Jasoda, some of the other characters and their journeys also hold equal prominence in the book. What I liked about Jasoda’s character is that despite being reared in a culture of deep-rooted patriarchy which made her rigid in certain ways, Jasoda still nurtures an innate kindness, and is willing to understand the points of views of her children when they put forth differing arguments. She might not agree with everything they do or say, but she surely tries to make her peace with them.

Jasoda’s eldest son Himmat battles through a life of struggle to emerge as a true victor. He is intellectually a genius and his hard work takes him places. However, the cruelty that he witnesses while growing up – his father’s treatment of his mother, or the abuse they face while living on the streets of Mumbai, hardens something within him. The repeated murders of his new born sisters in his mother’s hands leaves a deep and lasting impact on him.

Sangram Singh is the quintessential toxic male character and so is the Prince of Paar, Parbat Singh. These men understand nothing beyond their selfish interests, and every other human being is just a means for them to achieve their own self interest.

The characters are realistic, however, in my opinion, most of them lacked a three-dimensional treatment. Hence, both the good and evil characters do not provide an element of surprise by acting differently than is expected of them. The narrative also lags in the middle of the book. The author says that the incomplete manuscript for the story had been lying with him for around twenty years before it finally reached completion. Maybe, that is the reason it seems a bit forced; I certainly found the first and last one thirds of the book more enjoyable than the middle.

Jasoda is a woman’s journey from a bleak existence to one of empowerment and freedom. But this is also a story that unflinchingly tells the story of what women might go through in the socially or economically backward parts of India.

This is an important story, because it helps us understand what kind of evils some women are still struggling against even in this day and age. Hence, Jasoda is a real eye opener of a book, that despite some of its shortcomings, shines through for the truth it portrays, by an author who knows how to grip the reader with his evocative writing till the very end.

Top image via By Amrei-Marie [CC BY-SA 3.0], from Wikimedia Commons, and book cover via Amazon