Gilu Joseph’s Breastfeeding Pic Is Aesthetic, Sure! Now Can We Have Some Practical Support For Breastfeeding?

The recent debate about a photo promoting public breastfeeding reminds this author that we moms need practical support such as clean breastfeeding rooms. 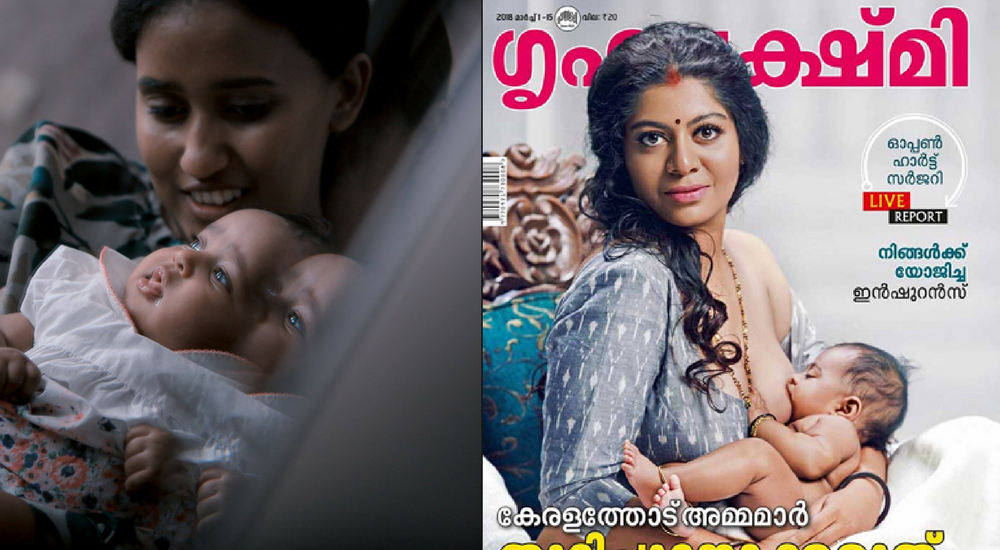 I remember when I first wrote an article on breastfeeding online, one reader commented that I shouldn’t be writing so extensively about breastfeeding and I replied if it was wrong or taboo to talk about it.

Breastfeeding is a natural process that is important both for the well-being of the mother and baby. I have no qualms at all talking about breasts or breastfeeding as long as they help another individual. I remember an aunt of mine who remarked, rather sermonised to us children back then, on how society has over-sexualised breasts. Their sole purpose is for the nourishment of babies. Period.

Recently Gilu Joseph’s breastfeeding photo on the Malayalam magazine Grihalakshmi’s cover page became a heated topic of discussion. We’ve seen celebrities from Angelina Jolie to Lisa Haydon closer home promote public breastfeeding and rightly so! There is nothing wrong except your perspective. Using their privileged position as celebrities, they are making a strong social statement that breastfeeding is a natural phenomenon and there is nothing sexual about it.

While personally I thought that Gilu Joseph’s breastfeeding photo was completely natural and shot beautifully, I have certain reservations about public breastfeeding. By showing a no-holds barred photo or video of breastfeeding, are we normalising or furthering the stereotypes attached to the sexualization of breasts?

Where did I fall on this colourful spectrum of the nebulous milky way, I wondered. I was right in the centre, seeing half truths on both sides of the heated argument.

Normalising or furthering sexualization of breasts?

I have reservations because of two reasons. One, because I am not entirely convinced if it will have any major impact on people’s perceptions or serve any practical solution and two, because of public etiquette.

Like the real world, the internet is filled with all kinds of people. The reason we put all those child filters on our computer system is because we want out children to stay far away from the dangers of the world – pedophiles, perverts, voyuers and what not! Similarly, in an attempt to normalize breastfeeding and change the perception of society, are we not perpetuating those very same stereotypes that we fight against? You are giving the pervert or voyeur exactly what he wants to see. Is this the best or the only way to normalize breastfeeding?

Is it even practically possible to dictate to others which part of the human anatomy can be sexualised and not? How can we tell men and women what they should or should not be sexualising inside their heads? Can we really control others’ instinctive sexual urges?

I am not a Hijab wearing woman, or hold a traditional bent of mind or have an introverted personality, but I would still never openly breastfeed unless there is a dire need to do so. Breastfeeding, for me, is not just feeding the baby. It is more than that – it is an intimate bonding ritual, akin to meditation. Like meditation, I cannot focus on my baby or us in the midst of people glaring overtly and covertly at my breasts in public especially here in India.

Public breastfeeding is a controversial topic and it has been banned in several countries and states. I might be in the minority but I see open breastfeeding also as an element of public etiquette. Would my act cause some form of discomfort or embarrassment to others in the public space? I remember how uncomfortable I felt when a random man flashed his private parts in public. While breastfeeding is completely a natural process, we need to be mindful of everyone’s sentiments in a public space. I’ve heard women in favour of public breastfeeding argue that when we can feed a child in public with rice or candy, why can’t we breastfeed a baby in public openly? And, I totally understand their rightful argument as well.

Public breastfeeding is not banned in India. The country is quite liberal in this aspect

It is a common sight to find women from the less privileged strata of the society breastfeed their babies in public spaces freely without any disturbance or objection from anybody. They have no access to toilets, leave alone breastfeeding rooms. Yes, women hailing from the privileged classes of the society don’t breastfeed their babies in full public view as they have easy access to private breastfeeding rooms. And, that unfair distinction and prejudice is a major problem that needs to be addressed and resolved.

Ideally, it is great to have everyone view breasts and more so, breastfeeding in a non-sexual light. I think the photo is aesthetically shot and shows breastfeeding in a beautiful light. As a mother, I find nothing offensive about it. But it is a tall order to demand (and many may argue, an impractical one as well) and expect everyone to view the photo in the same light. The more practical solution which is also the need of the hour is more public breastfeeding rooms for women across all strata of the society.