Time to destroy the taboo against talking about mammography and mastectomy, which prevents early detection of a fatal and common disease in women. 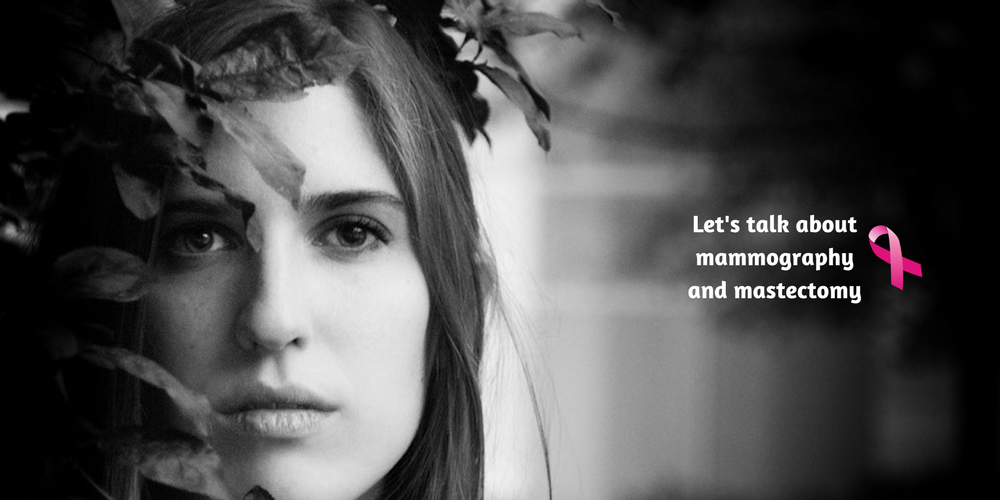 Time to destroy the taboo against talking about mammography and mastectomy, which prevents early detection of a fatal and common disease in women.

“It drove home, personally, the value of early detection and education and intervention” –  Janet Napolitano on detecting her breast cancer early

On 23 February 2018 I went to a hospital to get myself a mammography done. I got curious questions from my friends if I had any symptom related to malignant tumors in my breast or if I have been suggested by a doctor to get a test done. When I replied “No, none of the stated reasons are related to my tests” eyes rolled backwards. While we have started talking of menstruation with Bollywood making movies like Padman, it is equally important for a woman to know about mammography and mastectomy.

Mammography is an x ray of the breast. It is advised for a woman between the age group of thirty to seventy to undergo this screening test as a check point for breast cancer.

Generally mammograms are endorsed by the doctors for females who have breast cancer or have symptoms of the same but there is no harm for a woman to go ahead and do it as a routine test once in a year. As it involves getting a woman exposed to radiation it is better to consult a medico before proceeding for such a test to know the frequency a woman can get the test done.

In my case I had no symptom but I did undergo mammogram and also PAP smear test as a precaution for any symptom of breast cancer and cervical cancer. While in the west it is mandatory a woman should go for these screening tests here in India we are still trying to fight out our stigma on menstruation. The process is little painful as it involves placing the breast between two plastic plates of the X ray machine and the plate squeezes the breast to be flat so that the machine can screen the inside of the tissues, cells and membranes of the breasts.

The initial symptoms are highly likely to go unnoticed as it may be a small lump in the breast or underarm. My aunt had breast cancer and she was diagnosed at a very early stage. In her case she had a small lump in the underarm and another bemusing symptom in her case was cracked heels. The dermatologist immediately went for screening of lump and he was right in the diagnosis, there was a lump very much under her arm. The malignant lumps aren’t painful, so was the case with my aunt and also it is a hard lump with uneven edges.

As per the American Cancer Society certain symptoms include swelling of all or part of the breast, skin irritation or dimpling, breast pain, nipple pain or nipple turning inward, redness, scaliness, or thickening of the nipple or breast skin, a nipple discharge other than breast milk, a lump in the underarm area and a few more of such like symptoms. Sometimes there may not be a single reason as well or a reason so weird that no one can even think of having a breast cancer, as it happened in case of my aunt – cracked heels.

Screening and testing of Breast Cancer involves MRI, Mammogram, biopsy and others as prescribed by the surgical oncologist.

Alexandra Sifferlin reports in Time Health “recent research has shown that despite having more treatment options, women with cancer in one breast are increasingly choosing to remove both breasts — even though experts in the field say the procedure is not necessarily accompanied by better outcomes […]. Doctors generally discourage contralateral prophylactic mastectomy—also known as CPM, or the removal of a healthy breast when the other has cancer — for women at an average risk for additional breast cancer.

On why doctors are rethinking breast cancer treatment further reports Sifferlin “The emotional reactions to cancer frequently prime patients to desire the most aggressive approach,” says study author Dr. Steven J. Katz, a professor in the School of Public Health at the University of Michigan. “Our results underscore that most surgeons today favor less aggressive approaches to surgery, and it’s challenging for them to communicate with their patients that bigger is not better.” Katz says that women are increasingly hearing about CPM through the experiences of family and friends.”

The post operative phase which involves physical and emotional healing can be read here. Rest and taking things easier is very important.

I had mentioned my aunt who had been diagnosed with breast cancer. Breast feeding a child decreases the chances of cancer – she had that point against her as she had chosen not to breast feed. Also, she did not really take all the post operative care – she thought she had been cured totally of the disease after a double mastectomy, and went about with her previous lifestyle of multitasking when the cancer hit back with rage post two years of her surgery. She was an avid tennis and badminton player and a danseuse as well.

Yet another is the case of my senior in school who succumbed to the disease as she ignored the early symptoms. The cancerous nodes had reached her bones, and chemo did not help her either. She left behind a five year old son, who she passed away.

There are two more cases, one my mother’s own colleague who was diagnosed with stage II B of breast cancer but is a survivor – she took good care of herself and followed the doctors advice. The other one was one of my professor’s mother who also was diagnosed with breast cancer at stage II. Post treatment she survived the cancer and died a natural death. This is the reason I stress on taking care of oneself and listening to the doctors and scientific guidelines battling breast cancer.

Just as we are fighting our stigma on menstruation, let us also be vocal on breast cancer issues as well. Awareness on mastectomy and mammography should be raised. As I said earlier, we need not wait to get a test done till we get any symptoms, but do regular screening test to keep ourselves updated on our health parameters.

Breast cancer if diagnosed early can be controlled and one can lead a healthy life. Like me go for your screening tests. Pay no heed if anyone questions you on this. We need not wait for a Bollywood movie to break our taboos on mammogram and mastectomy. We women should be crusaders for breast cancer awareness. We deserve a healthy life and a breast cancer free world.