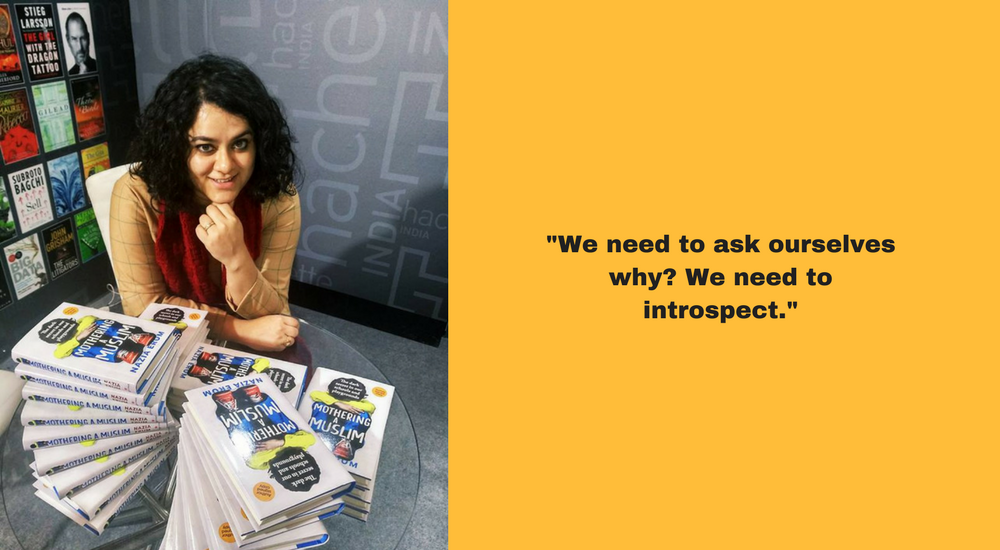 “Mothering A Muslim” Is The Voice Of Mothers Across India Embattling Fear: Nazia Erum, Author

Mothering A Muslim by Nazia Erum is a call for self-censorship to give our children a humane life in an increasingly divided India.

A five-year old Azania spots Muslim worshippers around her car in Aligarh. They are dressed in white kurta-pyjamas and skullcaps. She raises an alarm that Muslims were coming and that they would kill them. Azania’s parents Arshia and Harris Alvi are both amused and shocked, since their daughter is one of them. But at this tender age, from where has this fear or teaching come to her?

Another child has been addressed as a Paki (short-form for a Pakistani) in school.

A third child – a 10-year-old boy from Bhopal was often addressed as a terrorist in his school at Indore. His tender heart was so shattered by this bullying that he returned to his hometown, and now has only Muslim friends.

A fourth child, a six-year-old beats a classmate saying, “I HATE MUSLIMS.”

And all these skeletons of a mentally degrading India fall out of the closets of Muslim mothers from across the country, who narrated this to Nazia with a broken heart. A heart that was pulsating to have a voice. Nazia Erum, the founder of The Luxury Label, a workwear brand for women, decided to be their voice through her book Mothering A Muslim. With the present political scenario in India, the book has become a bestseller.

I decided to speak to Nazia while she was travelling back to Delhi from a related event in Hyderabad. My first question had to be “Why did you decide to become their voice?”

Nazia explains, “Right from when I conceived my child to when I gave birth to her in 2014, I went through conversations with fellow Muslim friends and their narratives of what their children brought back home from schools, from playgrounds etc. A fear was palpable among our community. My daughter was born in the same year when our country became big-time divided along religious lines. Thus, I decided that the first name of my child will not burden her with hatred, and people must not shy away from hugging or loving her. We chose the name Myra. Not that I was hiding her identity, she has her surname. But I didn’t want to take away the opportunity of a normal childhood, from her.”

And that’s when she also decided that just doing this wasn’t enough. She decided to take charge and be the voice of the silent, suffocating struggle that each Muslim mother has been embattling in India’s current political climate.

Nazia says that two types of conversations or feedbacks have been primary once the book was out. “One is of those who find NO HOPE ahead, since we are becoming a society dominated by those who have learnt to normalise hate, by staying silent against it or not even questioning it…let alone make an attempt to stop it. The second type of conversations happened to be with those people who thank me for raising this concern which was long-due, for braving it. For not trivialising this issue of grave concern.”

Nazia is glad that she is getting heart-touching compliments for voicing the buried calls for help. The compliment that is closest to her heart is, “This book was the need of the hour, and it will stand tall even after this world.”

Nazia is basking in the glory, but deep down somewhere, I know that all these compliments will not soothe her nerves till a positive outcome through her book comes out – which I would call an awakening. I also believe that in the present scenario, the topic she chose will not be showering her with roses alone, right? “Yes,” Nazia agrees. She too has had her share of trolls and those who are bad mouthing her. So how does she deal with it?

I know Nazia through a close friend. I know the Nazia Erum who with her Muslim women friends organises inter-faith Iftar on Eid. I know her as a woman who opens her heart full of love for other communities during the most important festival of her community. And imagine the plight, the pain she would have gone through penning this book? My heart shudders at the thought. And her next words leave me introspecting.

“My fondest memory from childhood is that of our mother offering the Namaz and then blowing the customary ‘dua’ into our faces. As tiny tots, we never understood the purpose, the love, the protection. But now that I am mother, I know that a mother will never sow seeds of hatred in her child, be it a Hindu or Muslim or any other religion. So my hunt was for where this was coming from,” says Nazia.

Mothering a Muslim is no manual, as it might sound like that from its name. It is a memoir of mothers whose children have faced bullying, name-calling, Islamophobic jokes or even serious allegations. Nazia asks me, “Imagine a kindergarten child acknowledging to her schoolmate: Yes I am Muslim, but I do not eat beef.”

So where is this ‘fear-generated-out-of-hatred’ coming from? And did she also face such soul-numbing remarks as a child?

“I grew up in Assam and was brought to the cultural shock of Delhi, where I moved to do college to study journalism. But I had never faced it beyond light fun. My brother does have a memory of something that remains with him till date, but not the kind of harrowing stories I have witnessed from the mothers in the book. That was the India of 1980’s. Times have changed. The second half of my book talks about how no gatekeeping is happening; children have access to non-filtered information. Especially among the middle and upper class. No wonder only 30% radicalised Muslims come from those who studied in madrasas. Many radicalized young men come from normal mainstream schools like the ones your and my child goes to. If they are being pushed into a corner, it is a matter of concern as we don’t know what influence will lead where. Even the 9/11 attacker was a well educated man. So, we need to ask ourselves why? We need to introspect,” insists Nazia.

She adds that media is playing a major role here in opinion formation, since right from the national anthem debate to the lynchings over beef…to now the triple talaq law debate, the Muslim community is being projected in a light like never before. And all this is going into innocent minds since the men of the house, no matter what, will always be either involved in politics or be a part-and-parcel of it.

“Can you believe that children know how to name-call? A poor Muslim is called Bangladeshi while the elite one is a Pakistani,” Nazia leaves me stunned. Yes, I too wasn’t aware that these slurs that I happen to hear in my colony are common among children. “All because we fail at self-censorship or fail to correct the one who speaks wrongly around us.” My belief echoes in Nazia’s words.

“My daughter’s paediatrician had told me after her birth: Remember you won’t be watching your child, it is she who will be watching you,” Nazia recalls.

So how to address the issue then? Where must the change begin from?

“First of all we have to accept that religious discrimination is rampant, that it is hitting the brains of our innocent children. And then resolve to find a solution. If we don’t nip the problem in the bud, then our children will never grow up to be humans. They will grow up to be what the harbingers-of-hatred want them to be. Humanity is dying a slow death in our children. And this is happening on both sides…be it the bully or the one being bullied. So we first need to accept that we have a problem and then address it. Stop doing what you don’t want them to do,” Nazia very vocally stresses on this ‘need of the hour in every household.’

And what makes me call it the need of the hour everywhere? Because innocence in children is calling out for it. Because their sad eyes are staring into mine, every time I turn a leaf of the book. And also because we all have read but failed to practice that ‘God made Humans, Man made Religion.’

While I am penning this narrative with trembling fingers, the environs are wrapped in an about-to-set sun’s bright YELLOW hues — Nazia’s favourite colour. And I pray, that may the same brightness envelope our lives in such a manner that saffron & green just remain the beautiful colours of petals and leaves in my garden. Because that is the kind of India Nazia wants to give to Myra, and I would want to give to my child, when we have one!

9 Indian Women Authors Recommend Their Best Read In 2018 – How Many have You Read?

11 Inspiring Gender Equality Quotes That Will Leave You Thinking