I Lost My Father To Alzheimer’s; My Award Winning Film “I REMEMBER…” Is An Ode To Him

Gayatri Sharma portrays the protagonist of the international award winning “I REMEMBER…”, that deals with Alzheimer’s. Here she tells us what drove her to collaborate with senior journalist Geeta L Sahai on the film.

Approximately 50 million people in the world are affected by Alzheimer’s. And from these, 4 million Alzheimer’s patients are from India. And you will be shocked to know that – 2 out of 3 Alzheimer’s-affected people are women. And the worst part is that this disease that has no cure, that ultimately is a slow poison leading to death, is not even covered under medical insurance! So isn’t it time that the government, society, the law makers wake up to the need of the Alzheimer’s patients, and their families which are the silent sufferers?

One woman decided to join hands with another – senior journalist Geeta L Sahai decided to make a short film to generate the much-needed awareness about Alzheimer’s Disease. Geeta lost her mother to Alzheimer’s a few years back. And ace theatre actor Gayatri Sharma, who had lost her father to the same, said yes to the offer to play the lead protagonist.

The end product is a soul-stirring, real-life-story based 48-minute film “I REMEMBER…” – an ode to both the departed parents.

This film leaves you with goosebumps with every shot – tracing the journey of a woman and her family while they come to terms with the early onset of Alzheimer’s Disease, and later her death. The protagonist’s life and end, in the film, raises thought-evoking questions about the fragility of memory, the aesthetics of care, institutional support for mental health, and the difficult choice between loving and letting go. For the sensitivity it arouses, “I REMEMBER…” has already won six international awards.

And I am here to track the journey of 45-year-old, New Delhi based theatre actor Gayatri Sharma through the film… and through her life, because her role has left the audience spellbound and sensitised.

Gayatri belongs to Assam – a culturally very alive state of India – but also one of the states that also faces neglect, in many ways, from the mainland. Gayatri starts unfolding her life’s journey with… “After my post graduation in English Literature, my love for music led me to dabble in FM radio for a year before joining NDTV 24×7. I continued reporting for the channel for more than a decade and In 2011, I won the Laadli National Award for the best Television news on Gender Issues.

Soon after, I quit Television and joined an international school in Delhi as a Drama teacher in 2012. Although I have always been acting on stage along with my job, it was after I joined teaching that I started pursuing acting more seriously. I have moved on to become a permanent consultant faculty in the school, working 3 days a week, so that the rest of the days I am free to do my theatre and film projects.”

Gayatri takes a pause, and speaks in a very low tone, “Mahima, this film resonates with my life to a great extent. My father died of Alzheimer’s. I am in my mid 40s and was always looking for a challenging role. But when director (and senior journalist Geeta Lal Sahai) came to me with the subject, the daughter in me had to take a call along with the actor in me, and I didn’t think twice.”

Fighting her emotions, Gayatri goes on, “My father was an engineer and my mother a housewife. My father was an electrical engineer, and as he was working in the Oil Sector he was posted in various refineries around India. As a result, we had to do our schooling in different parts of the country. I have grown up in a liberal household where my parents didn’t punish us for securing poor marks. But yes, my father would admonish us if we didn’t read the newspaper!” 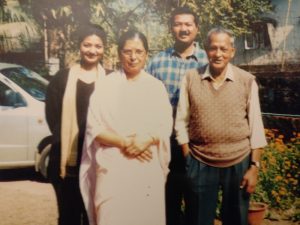 Gayatri Sharma with her parents

Taking a deep breath, Gayatri continues, “We were always encouraged to play sports, sing or cultivate whatever skill we were keen on. Dad gave us wings. And when he was affected by Alzheimer’s, my world had come to standstill in a manner that I could see the sand slipping away from my hand too fast. Through “I REMEMBER…” I wish to create awareness about this slow poison that affects a human brain, for which a quick change is required in terms of empathy in the society, in the government, in our medical laws. Mahima, not all can afford the treatment.”

And my memory takes me back to the old age homes I go to visit often. I have seen abandoned adults affected by Alzheimer’s. I have seen their plight.

As Gayatri goes on, I too try to fight-back my tears, “This movie was a personal journey for both director Geeta Sahai and me, as we have dealt with Alzheimer’s very closely in our lives. She lost her mother while my father too fell prey to this dreaded illness. Through this movie we shared our personal experience on screen and off it. It was tough, but as a tribute to our parents we had to live the movie, beyond the reel.” 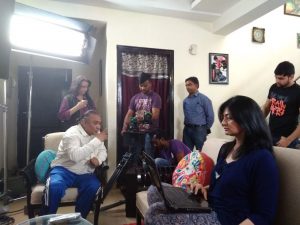 On the set of “I REMEMBER…”

Gayatri’s emotions flowed like a gushing stream and I felt it was wrong to stop her. And what she said next was, “The film took a lot out of me, had to not just put my act together, but my heart together, my courage together to face the camera and live the pain, the agony that I had gone through. The issue that the film addresses had also intrigued me as to why even today when medical science has advanced so much, there is still no cure for this dreaded illness, which according to me is worse than cancer. My heart aches every time I watch the film as it brings back memories of my father while he was battling with his memory loss and that sense of helplessness for the caregiver, namely and mainly my mother. I have seen her break piece by piece everyday, and then rebuild herself to take care of him the next day.”

At this juncture I remind her that as per statistics more women are abandoned than men in case of Alzheimer’s. And Gayatri quips, “Women are natural caregivers and when it strikes someone in the family she looks after and cares for them. Men are usually impatient and far more individualistic, so instances of abandoning a wife or a mother are therefore more commonly heard of. However one cannot generalise.”

And I am taken back to the times when my best friend was struggling with her mother’s Alzheimer’s and the kind of trauma we as an extended family went through, to watch her fight a lone battle, in terms of being an only child. But she didn’t give up.

Gayatri shakes me back to the present, “Hello Mahima, are you there? Again got lost in your friend’s life? I know, you told me you have seen it as well, but not all can relate to it. And those ‘all’ are my target audience, because the only way to fight this disease is collective empathy.”

Demanding for awareness and empathy

The post graduate in English Literature and an actor of international repute and excellence have taken a back seat in this interview. What I can see a lioness who is roaring, seeking justice from life, from people, from the world, asking what wrong was done by the Alzheimer’s patient and their family to get such apathy?

She goes on, “Along with the affected person, the real victims include the caregivers, usually the spouse or the closest family members. It’s an everyday challenge to look after the victim who is incapable of functioning independently, mentally, and physically with each passing day. The caregiver’s family gets financially drained attending to the victim and their needs.” 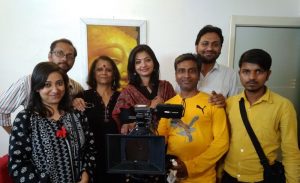 Gayatri Sharma with the crew

But for Gayatri, the much-needed awareness is above everything else, as far as this film is concerned. So what is your message to the society Gayatri, as a daughter who lost her parent to it?

What’s your message beyond the film?

“Well, I would say that it could happen to you, to me or to your close ones. It requires tremendous patience, and a lot of support from the entire family and friends for not just the patient, but for the caregiver to endure this. This illness can drain the victim’s family emotionally and financially. If I were a lawmaker, I would have ensured that Health Insurance benefits should be provided by Government agencies, to help build a strong network of caregivers for affected families, to launch widespread awareness campaigns, and to counter the stigma attached to Alzheimer’s. Since I am not a lawmaker, I am trying to mobilise the masses towards seeking it through ” I REMEMBER…”

To wrap-up I ask Gayatri to leave us with some parting thoughts that must embed in the minds of the readers, and she leaves us with: “I live with some deep regret. My dad, after slipping into Alzheimer’s used to ask for a music system. He used to tune into a small, cheap radio at times which eventually stopped functioning. It always slipped my mind to replace it with something better, and at times I didn’t take his demands seriously as most often he had stopped being coherent. After a couple of months, he stopped walking or reacting to anything. I later read that music helps Alzheimer’s patients to an extent. My deep regret is that maybe if he could have listened to music, he wouldn’t have deteriorated so rapidly. I cannot do anything to change that now. I wish I could! I want all affected families to take note of this point. Care for them with all your heart, till they are around.”