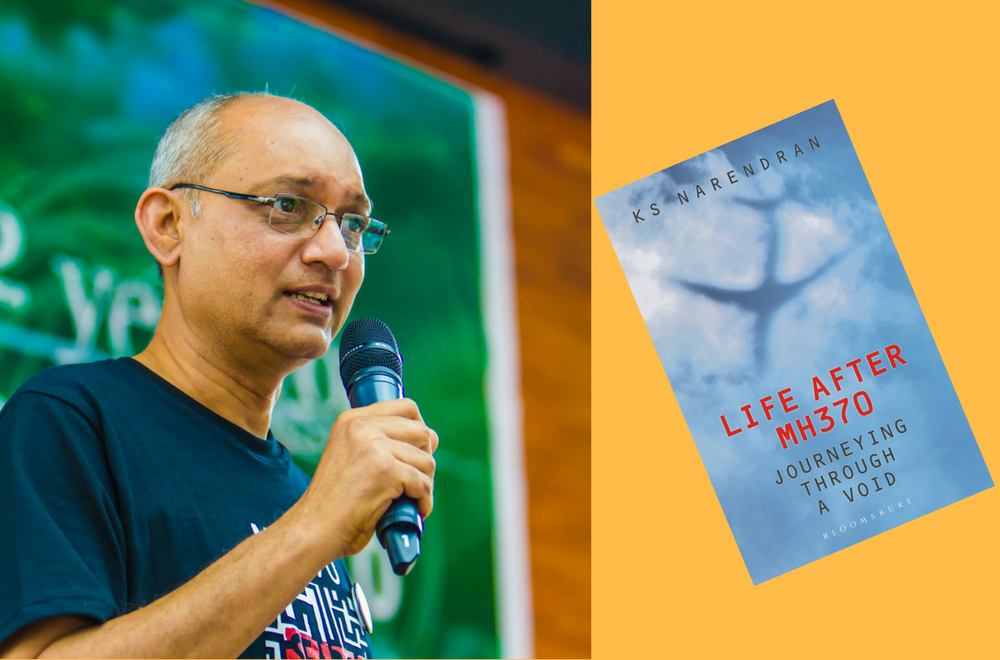 KS Narendran Lost His Wife To The Malaysia Airlines Disaster. Life After MH370 Is His Personal Account

KS Narendran lost his wife in the MH370 disaster. Here is an extract from Life After MH370: Journeying Through a Void, a riveting personal account of how it affected him and his family.

Meghna reached home that day. Her University’s Vice Chancellor and faculty had spoken to her, extending their sympathies and support. That put her at ease about the prospect of missing classes. She reached home to a house full of people. I had very little time with her during the day.

How was I to deal with Meghna? I did not quite know.

Meghna from her formative years was a picture of calm and serenity, not overtly expressive or outgoing, quite content in her own company. She is pragmatic and adaptable, resilient and self-reliant, ever willing to move on rather than wallow in regret or live in the past. Beneath the serenity is a deeply sensitive kid, who clams up or shows annoyance and a frown at most in the face of hurt and pain. She will, however, admit readily that this is a burden.

Chandrika and Meghna were a strong team. They were on the phone at least twice each day and spoke for hours, updating each other on the minute details of their day. Most forays into the arts, decisions about courses, colleges, subjects, assignments, were products of intense discussion between them. Chandrika was a major trigger for Meghna’s pursuits, a cheerleader and a ‘go to’ person. For Chandrika, Meghna was a deep and perennial source of joy. For Meghna, Chandrika was the confidante.

It was dif cult to fathom how Meghna received the news of MH370. She obviously suffered internally, and I suspect, struggled to put words to her feelings of shock, bewilderment, and loss. Never one to make a scene, she carried on gamely in the company of friends who did their best to keep her engaged and distracted. She had never seen so many visitors to our home and perhaps, struggled to respond to the words of comfort, the hugs, and the kisses.

In the first week since MH370 went missing, a significant amount of time went in talking and listening to people who called or visited. There were some friends and relatives who stayed with us for days and took charge of affairs at home. They would thoughtfully offer to hold calls if I chose to rest and remind me from time to time that I did not have to play “host”. They kept track of the developments through television and news feeds on the internet and let me know if there was anything significant. My reservoir of patience and capacity to greet and receive people without irritability surprised me. The days were interspersed with long and numerous calls from Chandrika’s mother and brothers, eager for news and concern for us.

I assumed that it was a matter of time, say a few days, by which time we would know the fate of the plane and its passengers – location, survivors, and other such. It was widely assumed that my trip to KL was imminent. Most people who visited asked expectantly about my KL programme. I too had in mind that I should keep a travel bag and my papers ready. The airline had already arranged for a visa to Malaysia and had me on standby to travel to KL.

Yet, even after 72 hours from the time the plane went missing, we had no assurance that the search was being guided by reliable information. It gave the impression that if one threw a number of assets such as ships and aircraft at the task, “something” will surely show up. I considered taking up the offer of the airline to take me to KL, I was optimistic that the search will yield some results, some news of the whereabouts of the plane and passengers. However, as I thought about it during my walks and through discussions with friends, it became clear that no purpose would be served by my travelling to KL. If the plane and passengers – surviving or dead – were located, the airline, in any case, would notify and make arrangements.

I was aware that the daily briefings raised anxiety levels of families already gathered in KL. They detailed how many ships and planes were deployed in the search but little that gave a hint or a hope of success in the search. Incredulity was giving way to frustration, an angry mood had set in. Families that had flown to KL felt cheated by the scant information, the realisation that the Malaysians were clueless, and that their attempt to manage the narrative of an informed and focused search was failing. As I saw the outpouring of frustration and grief among families in KL and Beijing through television, I realised that I was better off waiting for news in Chennai, at home in the company of family and friends who generously offered their time and consolation. It was still the time when the search was being conducted in the South China Sea, and one wasn’t even sure whether eventually, one will need to travel to KL, Ho Chi Minh city or some place in China. So rushing to KL didn’t make sense.

What was the scenario that awaited me at KL? I wasn’t an investigator or an expert. Malaysia was an alien land, KL, a city I had never visited. I didn’t know the local language. I would in all probability have been holed up in a hotel, watching pretty much the same television channels available back home, going through the routines that keep body and soul together and wait for news. I would have been herded to the same conference room that I had a glimpse of from Chennai to listen to a skeletal brie ng that exposed the lack of any credible information and a narrative that could help put the pieces together or point to the next sequence of steps. One would have suffered in isolation, grieved along with the other families and got caught in the collective grief, hysteria, and anger.

While it may have added marginally to the cost of the airline, it would only have helped the airline add fresh sound bytes about all that it was doing for the families!

I asked myself whether going to Beijing or KL would have been my act in solidarity with the other affected families. I realised that my presence was needed in Chennai for family and friends, cutting off from whom would have been hard on them and hurtful for me.

The first time I saw the authorities handling families roughly, I felt vindicated. It served the authorities’ purpose to have all families cooped up in one place. It helped them restrict expression, media access, questioning and challenge.

And control resources. At Chennai, I was free to move around, mingle, and have my voice heard. That was precious.

When there was talk of some sightings of debris for the first time within the first week, there were preparations afoot to take the families to the site of the crash, mid-sea, should a crash site be confirmed, to offer their prayers. This was a trip that I was not eager to make. I was afraid of the seas. Plain and simple. But I don’t recall that I had a religious or sentimental need. One was duty bound – that was never in question. It seemed that it was time to pack up and be ready to travel. I had asked Meghna if she will accompany me should the need arise. She agreed. The whole experience was akin to a mock drill: a heightened phase of activity, a test of preparedness, and no more.

Besides asking if I was headed to KL any time soon, I was often asked by visitors if Malaysia Airlines was in touch with me and whether the Government of India had contacted me. I was disappointed by the lack of contact and information coming in from Malaysia Airlines. I was embarrassed by the lack of any response from my Government. I was hopeful of some guidance since nothing had prepared me for this crisis. Should I make the trip to KL? What documents should I carry? What caution is advised? Will our Embassy there assist? In what way? Disappointment soon gave way to anger.

A press meet was suggested by friends. The newspapers had mostly reported on how we were dealing with the situation based on hearsay, and I suspect some creative license. I felt it was better to go ahead with an interaction with the press.

I initially considered doing it at home but was warned that given the number of journalists expected, there could be an inconvenience to other families in the apartment complex. We settled on Chandrika’s office as the venue. In a way, it seemed appropriate. So on 12th March, around lunch time, I hurriedly worked on a statement, ran it past a dear friend (and a freelance journalist himself) who offered his edits over the phone and I was off to the first ever press meet of my life.

Excerpted with permission of Bloomsbury Publishing India from Life After MH370: Journeying Through a Void, available in bookstores and on Flipkart, at Amazon India, and at Amazon US