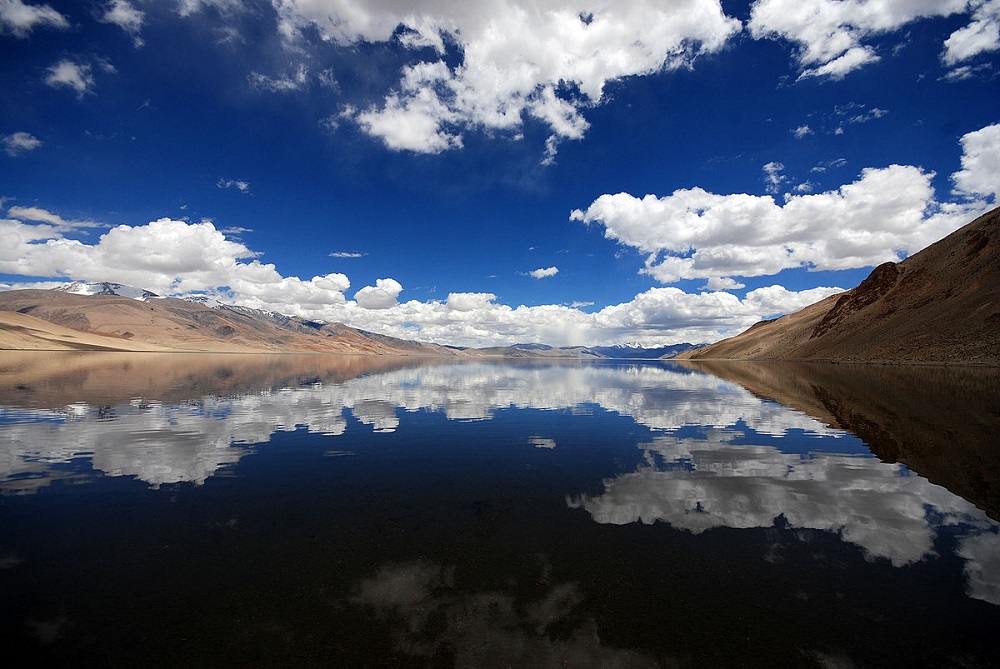 All you would like to know about taking that trip to Ladakh, through the lens of this author’s personal trip to this wonderful place!

By virtue of being married to an Army Officer and being one myself, there are few parts of India that we have not traveled through if not stayed or resided at. However Leh-Ladakh was one place I had never set my eyes on though my husband had traveled to the place a few times. It was a place on my bucket list for a long time and so this summer we decided to travel to this dream destination.

Days 1 and 2: Setting out to Ladakh

Presently stationed in Mumbai, we started on 27 May by taking a flight to Delhi, from where we were to fly to Leh, Ladakh’s only airport, by an early morning flight.

The preparation started fairly early. Planning the dates was in itself tricky having to co-ordinate 4 people. Then came the airing and sprucing up the woollens which had been tucked away in steel boxes.

We were fairly busy this summer and so reading up about the place was difficult. Another reason why I embarked on writing this piece. All I did glean was that acclimatization was essential and that Diamox was an useful medication to counter altitude sickness. Armed with this information and a sense of anticipation, we landed at Leh on 28th morning at around 7 am.

The airport is a tiny but a tricky one for pilots as we cross the mighty Himalayas, which affords a breathtaking view of the snow clad imposing mountains from the air.

The first day was spent as a day of total rest at the Army holiday enclave. Net connectivity was left behind in Delhi and we had to resort to the almost obsolete SMS to keep in touch. Expecting this, I had carried books and my knitting as well. UNO was a favourite way of spending family time as well.

An altitude of 11500 plus feet did make us breathless just by hearing it, but other than that we spent an uneventful day health-wise thanks to the precautions. The next day we ventured out to the Leh market and did some minor shopping as well besides visiting the Hall of Fame, a chronicler of military events in that sector and the Shanthi Stupa built by Japanese in 1991 to commemorate 2500 years of Buddhism and to promote world peace. It is a massive structure standing in mute testimony to the passage of time.

The border district of Kargil is towards the North of Leh and beyond it is the town of Drass, known to be the second coldest place in the world to be inhabited, next only to Siberia. We were interested in the place for the reason that it was the place where India fought the Kargil war in 1999.

Our first stop was Patthar Sahib, which is a Gururdwara, a place where Guru Nanak, the revered Sikh Guru, is reputed to have stopped during his travels and left the imprint of his body on a rock. Our next stop on this scenic way was at the confluence or Sangam of the two mighty rivers Indus and Zanskar. A popular rafting and camping site, the striking color difference between the two rivers is a sight to behold.

We then crossed the Moonlands at Lamayauru, an area known for its topography, resembling the surface of the moon and one of the most prominent Monasteries in Ladakh, the Lamayuru monastery. Further on we stopped briefly to admire the 9 ft tall Maitreya Buddha statue carved from a rock surface possibly in the seventh century.

The trip though interesting and scenic is quite tiring, and we stopped overnight at Drass. The next day proved to be a moving experience for all of us at the beautiful Kargil Memorial where we paid homage to the martyrs and heroes of 1999 – we ended spending more than two hours there trying to grasp the tremendous courage and fortitude shown by the young and brave men who gave their today for our tomorrows. 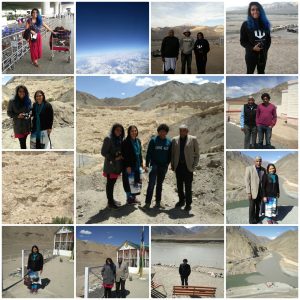 After resting for an evening we started for the valley of Nubra the next day. The highlight of the day for me and I presume for all of us, was the crossing at Khardungla Pass – the highest motorable pass in the world at 18,320 feet. We were treated to fresh snowfall as we reached the peak and I doubt any of us have ever relished Maggi the way we did that morning in a run down but welcoming shack a few meters short of the peak of the pass. It warmed our hearts as much as it brought warmth physically.

The snow delayed our progress by a couple of hours till the massive snow clearing machines helped us cross. However I will not deny the many anxious moments brought on the near skidding of our vehicle on the icy narrow roads as well as the shortness of breath we all encountered. Not surprising either, given the altitude of 18,000 feet plus!

Once we had negotiated the pass, we descended into Nubra valley watered by the rivers Shyok and Zanskar. The valley has been home to many a wealthy caravan since the days of the Great Silk Route through Central Asia and has interesting places nestled within it. Varying from the huge and imposing but inherently gentle and beautiful Buddha statue at Diskit, the place where the Dalai Lama is set to visit in July this year, to a small stretch of sand dunes in Hunder, greenery and orchards and the mighty rivers running alongside the majestic mountains, which are a sight to behold. The sand dunes have an added attraction of the double humped Bactrian camels.

We halted overnight at Partapur at the foothills of the Karakoram range. The nightly stopovers were a boon to recoup from the long and sapping day journey and also helped us bond as a family with reading and knitting over warm and tasty though simple food. 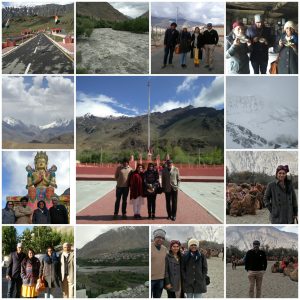 We made our way across the Nubra valley towards Pangong Tso, Asia’s largest brackish water lake which is broadly believed to have arisen between the two colliding continental drift. It is a huge water body with mesmerizing patterns on it as a result of the refraction of sunlight, and it stuns you with the beauty it creates against the backdrop of huge barren mountains all around it. Partly in China and partly in our territory it forms part of the sensitive Indo China border.

Made famous by Aamir Khan as Wangdu in the Bollywood movie, Three Idiots, it has been commercialized to a small extent with Three Idiots paraphernalia all around. From enterprising cafes named Three Idiots to the tacky yellow scooter on which Kareena comes to claim her groom, reminders abound. And I too succumbed to the temptation of the scooter as you can see in the accompanying pic.

It is cold and windy and it would pay to wear proper warm and protective clothing during your sojourn to this place as well as a walk alongside the lake, at 4420m, which to me, seems just short of celestial! 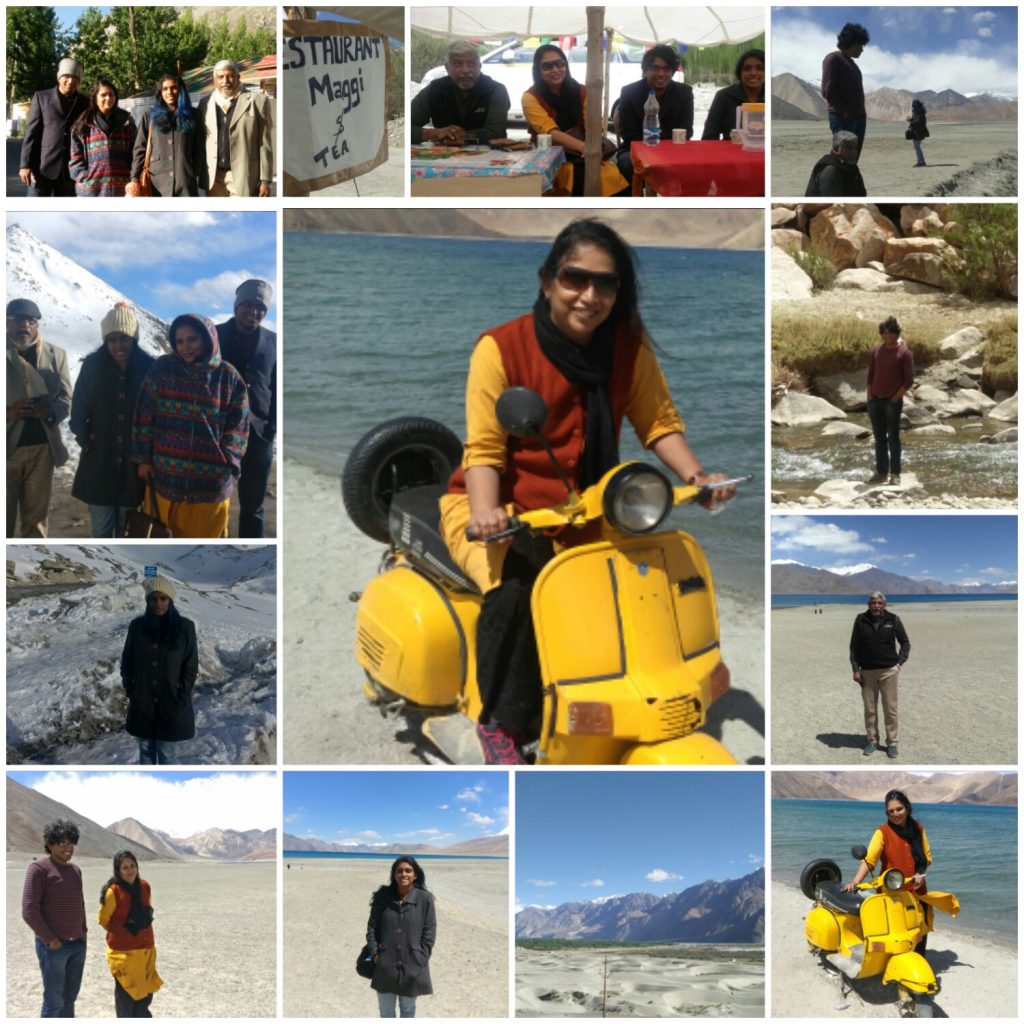 This was possibly one of the most eventful days in our Ladakh trip as we drove across the Nubra valley, towards the Chumathang Hot springs and thence on to Tso Moriri lake which is a fresh water lake at a height of almost 5300 m . The journey was once again punctuated with delightful stops at shacks with Maggi and Kahwa, the new fast food in town!

The lake is amazing and breathtaking in sheer color. The height can be a little troubling as happened to me. The shimmering blue glinting in the afternoon sun is a sight I can recreate in my minds eye as I write.

The Chumatang hot springs are a blessing in the biting cold and attract visitors from all over for both as tourists as well as patients to benefit from the medicinal properties of the Sulphur springs. We had an unique experience of soaking in a hot tub of the water form the springs at the guest house we stayed at. Pure bliss till the Sulphur fumes start stinging the eyes.

We were also lucky to interact with the Chengpa nomadic tribe of Ladakh, and see the way they lived in harmony with nature with baby goats, yaks and dogs being as much a part of the family as the chubby infant and an ageing grandma. This trip also brought us face to face with Yak shepherds (again women), marmots, and mountain goats. All in all, an experience to remember. 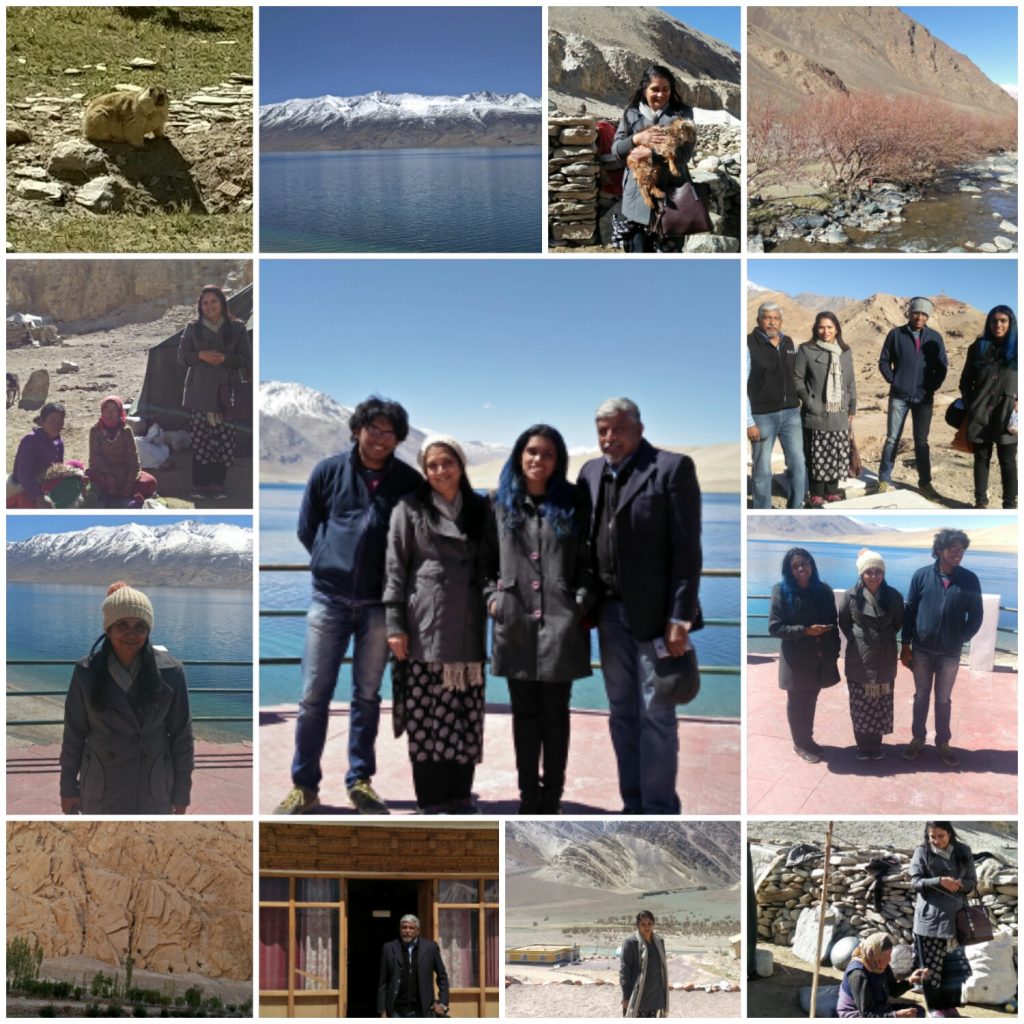 An early start and we were on our way back to Leh. En route were a couple of stops which would introduce us to the spirit of Leh and Ladakh. The region mirrors a lot of Tibet, the Roof of the world and shares a liked history that goes back into centuries old ties, spiritually economically and geographically. The Buddhists in Ladakh still look on Dalai Lama as the ultimate truth. The Hemis Monastery houses a museum which is a treasure trove of information and artefacts, tracing Buddhism for over 2500 years.

The Thiksey Monastery, 21 kms from Leh, again atop a hill, best known for its large and serene statue of Maitreya Buddha is definitely worth visiting. It also gives us a bird’s eye view of the town of Leh. We met a friendly monk there who bridged the gap between the cultures, having studied in Bangalore. As the Dalai Lama is reported to have said the statue needs no consecration, just a glance at the serene and calm face rejuvenates one’s soul.

Shey palace, though run down, houses a temple with murals which to me, is a must see. 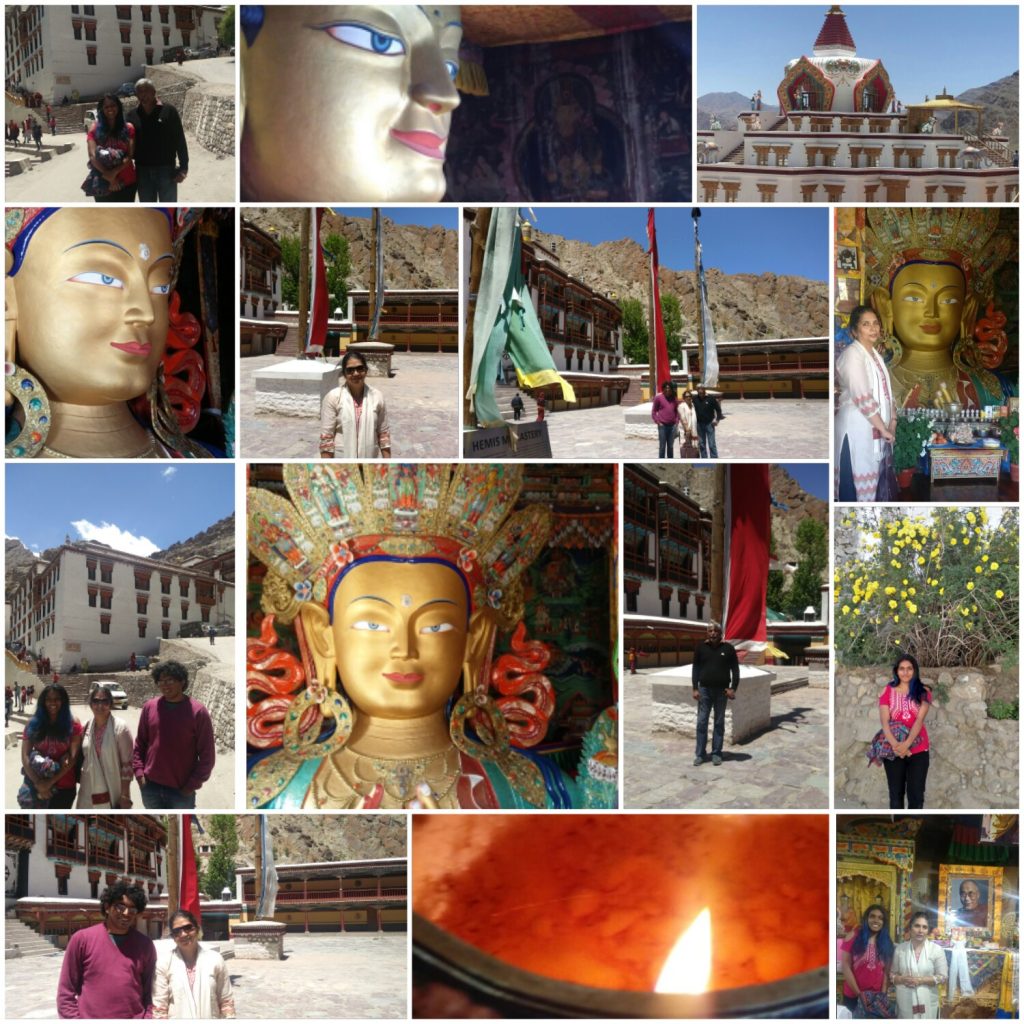 No description of Leh and Ladakh is complete without a mention of its small but bustling markets. From Pashmina shawls and stoles to beautiful knick knacks and precious stones, it is a shoppers delight! Especially one to Lamo Pearls. The food of course is to die for and we had our fill of momos, thupkas and soups at every opportunity.

That was our tryst with Ladakh, one of the most unexplored parts of India!

Header image source: By Prabhu B – http://www.flickr.com/photos/kshathriya/851429608/sizes/l/, CC BY 2.0, Link, for representational purposes only.

A Gynecologist by profession n blogger by passion, I love words! I love weaving life