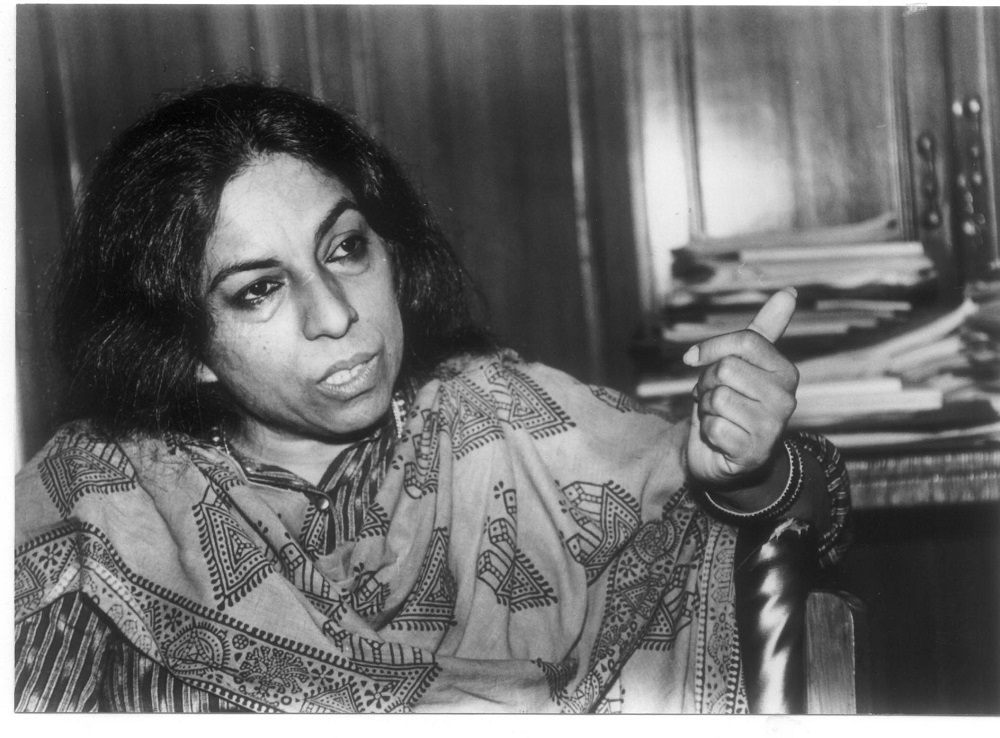 “What Do Women Write?” How Feminist Publisher Urvashi Butalia Answered This Question

Urvashi Butalia, the founder of Kali and Zubaan Books is a feminist writer and publisher who is very clear what ‘feminism’ means in the Indian context.

“Broad views about life have shrunk into religions, and we have been turned into their symbols. They regard us as empty symbols. Symbols of a religion, a nation. We mustn’t be trapped by that. In this war, let that be the ground of your contest. A ground that cannot be reduced to definition and detail.” – Urvashi Butalia (A quote from Katha: Short Stories by Indian Women).

She stands firm, her stance bold and unwavering, like a massif that rose on a foundation of bricks. She doesn’t mince words for the sake of it, and yet compassion plays a major part in what she has undertaken and built her life around. She founded Kali, India’s first exclusively feminist publishing house, in 1984, along with her colleague Ritu Menon and later in 2003 founded Zubaan books which works almost on the same values as Kali till date.

This was when Feminism as a movement had not even gained the kind of momentum that it has today. Coupled with a few questions about Women’s Rights, when I got an opportunity to seek wisdom from her, she spoke also about her early days as a writer, her experience of writing something as tragic as the events that happened during the Partition of India in her book ‘The Other Side of Silence‘, the meaning of feminism in modern day parlance and why would it continue to remain a grave movement that perhaps would not cease to exist for the many coming years.

“I am primarily a publisher who writes occasionally”, is what Urvashi says about herself when asked about her initial tryst with writing. In her typical candid way, she quotes her tutor, legendary Mrs. Krishna Esauloff – “Never forget that you must write from the heart, you must write as you feel, don’t feel you have to put in all this jargon shargon!” – This she believes got her into writing seriously before which she only wrote small articles for newspapers.

With a Masters in Literature from Delhi University and a Masters in South Asian Studies from the University of London, Urvashi Butalia grew up in a family which was close to writing, was progressive, which perhaps shaped her own interests in activism.

Her works have spanned from gender, communism, fundamentalism and media and her writing predominantly displays her feminist and left-wing perspectives. She was conferred the Padma Shri in 2011, jointly with her partner Ritu Menon, by Government of India. It is the fourth highest civilian award in India. Her humility spoke tons about her when she spared her much precious moments with us.

Birth of Kali and Zubaan

Urvashi Butalia had been working in publishing for a while during which she joined the Oxford University Press as a production assistant straight after her MA. During this time she was also deeply involved with the women’s movement, with many grappling questions – how to understand the phenomenon of dowry, what role did law play in our lives and so much more.

When she found that there was hardly any literature available to try and understand the issues more, she occasionally raised the question to her bosses – why were there no published books about women? By women? Urvashi says, “But they despite being lovely, good men, were not really interested, they asked, what do women write? Do they have anything to say? Will anyone read this stuff?” And so, being young and foolhardy and filled with a strange kind of courage that comes only when you are driven by a certain force, she took it upon herself and thus, the idea of ‘Kali‘ was sown in her then. Like all unconventional ideas, Kali took its own time to develop into a more nuanced entity.

She gave up her Fullbright scholarship through which she was going to get her PhD in Hawaii to pursue the idea which was now in the process of becoming a full-fledged sapling. After several more years of learning and planning she came home to set up Kali with Ritu Menon.

If you span Urvashi’s transition from Kali to Zubaan, you will find it has only grown more inclusive. So apart from having the same feminist values and principles that went on to make Kali the publishing house that it was, Zubaan, its child, embraced diversity responding to the changes in the women’s movement that were seen on the ground – the involvement of younger women, the kinds of issues they were raising, the need to go beyond English, beyond the city, beyond the middle class woman, the need to take new articulations of identity such as those based on sexuality, or caste, into account – Zubaan also started publishing for children and young adults.

Zubaan now works more closely with publishers in the Indian languages, translating their work into English and vice versa to have some of the most important feminist text available in Indian languages. In context to the world we are currently living in, it is needless to say this will bring about a much-needed revolution in the feminist thought process. This when publishing was a completely male-dominated arena, is not only just commendable but path-breaking.

Urvashi Butalia on The Other Side of Silence

When you take up a daunting task, you sometimes question the purpose of it – many times, perhaps. For Urvashi, interviewing people while working on The Other Side of Silence was one such task which despite leaving her exhausted and scathingly emotional, ultimately soothed and gladdened her. Because like she says, it had to be done.

Although she did not experience the pain that the Partition caused personally, the stories so many people told her made it all real and right there for her to experience. “I have never cried as much as I did when writing and indeed when researching that book. There were times I used to come out of an interview and wonder why I was doing what I was doing, I would feel so burdened by what people told me,” she says. This only goes on to demonstrate her resilience and her perpetual struggle to establish what was right and pursuing it till the end. The experiences that make us whole do not always have to stem out of personal hardships.

Feminism and its many labels

When you speak about Feminism these days, you also indirectly speak about misandry, misogyny, patriarchy, conditional feminism and the ‘greys’ of each of these. Questions are raised about the necessity to label movements because everyone has a relatively personal opinion about everything. Some say why ‘FEMinism’ if it is about equal rights? Some say why not ‘Humanism’? Urvashi Butalia bluntly asks us why we should use any ‘labeling’ at all.

One cannot put it in better words than her when she says, “What this whole business is, is about finding a name for something that is so centrally a part of our lives, something that is as real to feminists as breathing, which informs their every action, their every thought. What matters is what you feel, and how you act. And actually feminism isn’t only about equality, it’s also about difference. Say for example, when you talk of equality in a country that is so divided by different kinds of hierarchies, what are you actually talking about? A poor woman being equal to a poor man? A Dalit woman being equal to a Dalit man? Or to an upper caste man? Or to an upper caste woman? Feminism has some core values at its heart, but the ways in which it plays out are so contextual and historically located, that it is difficult to speak of it in universal terms, except in the most general kind of way. Labels should not matter if you act and feel and are able to articulate in whatever way.”

We live in a world which is better than say the world we lived in 50 years back. So do we stop now? We often hear this that women are living way better than what they were, so feminism is not a ‘necessity’ anymore. Some even call it ‘Feminist Paranoia’ while some equate it to Hitler’s Nazism by referring to screaming women as ‘Feminazis’.

To this Urvashi has an answer that doesn’t mince words. “Those who say we don’t need feminism any more are not looking at real, deep change. They take what they see cosmetically – the fact that beauty products celebrate women’s day for example – to be the truth. But this is not the case, our statistics on gender based violence are to be ashamed of, the health of our women is abysmal, lower caste women are routinely sexually violated and the law turns its face away from them, women drop out of educational institutions all the time, and I could go on and on. You just need any one day, and a newspaper from that day, to see how much ‘progress’ we have made where women are concerned.

She talks about conditional feminism to be a product of a baggage that comes with the word ‘Feminism’ perhaps because it is presumed to be a foreign concept that must be rejected without analysis. People who often say “I am a feminist BUT…,” are mostly trying to reject that foreign baggage – which she says is fair enough – “if they can stand up and say that they believe in ‘Women’s Rights’, that is fine too.”

“But wouldn’t it be principally amazing,” she goes on, “if they just stand up to the world and say ‘I am a feminist and I love it.'”

Yes, I am a feminist and I love it.