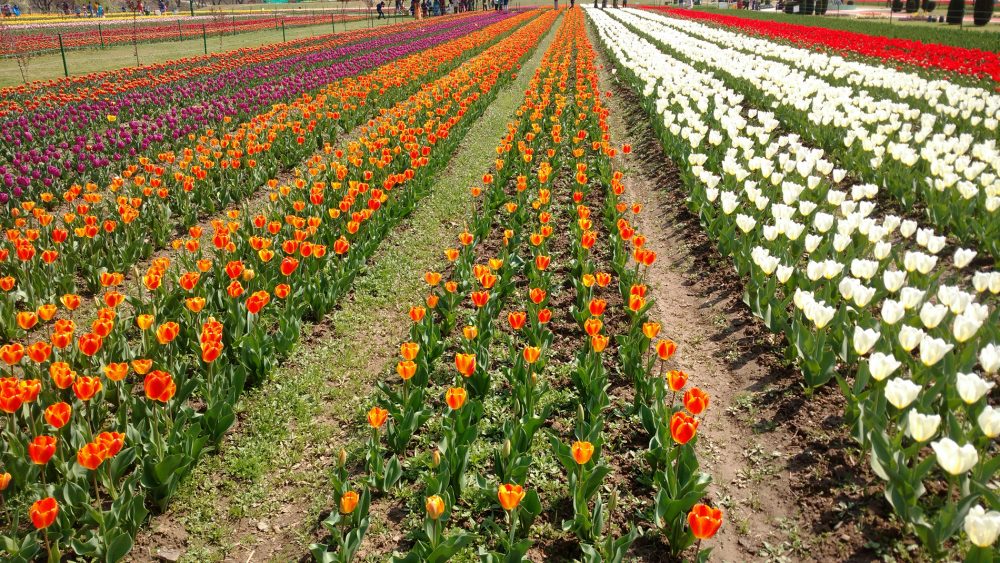 When A Visit To The Tulip Festival In Srinagar Taught Me Lessons Of High Risk High Returns!

The image at the top is of the Indira Gandhi Memorial Tulip Garden, Tulip Festival, Srinagar, 2017. But I almost missed seeing this. Here’s how.

I had booked my flight tickets from Mumbai-to-Delhi and Delhi-to-Srinagar specifically to visit the foothills of the Zabarwan ranges where more than 20 lac tulips blossomed at once! Siraj Bagh in Kashmir Valley hosts Asia’s largest Tulip Festival annually. I had been eyeing it ever since its inauguration in 2008.

I was in the middle of a busy day at work. My friend shared pictures of people clearing mounds of fresh snow in front of their homes in Srinagar.

Initially I thought it was photoshop. Snowfall in April? Nah! Nonetheless, I quickly googled the weather in Srinagar and read – “Defying weather forecasts, Kashmiris woke up to snowfall. A rarity because this is spring season.”

Well. I had mixed feelings. Ideally, I had hoped to see the tulips in their resplendent colours on a clear sunny day, yet, tulips drooping below the burden of accumulated snowflakes didn’t seem deeply upsetting either. At least I was going to see them!

Life Lesson 1: As cliched as it can get, be positive. Find your happy space. There cannot be a better recipe to stability and peace in life.

One day left to fly – fear of impending floods

The snowfall was only a trailer. I woke up to news alerts screaming “Heavy rainfall hits Srinagar.”

Wow! Now that sounded a death knell to my plan because if the tulip garden is inundated, it is closed down to visitors. I followed the story across the day and found that the state was panicking, and legitimately so. Memories of the devastating 2014 floods came alive.

I had to take the midnight flight to Delhi and the next day’s early morning flight to Srinagar. I was up at 6 am to find that the J&K Government issued a flood alert. Jhelum had crossed the danger mark. Jammu-Srinagar highway, the lifeline of the region, was closed down. Worst news – That the morning’s Delhi-to-Srinagar flights stood cancelled.

I thought to myself. Let me take the midnight flight to Delhi anyway. The subsequent Delhi-Srinagar flight may or may not take off. But by cancelling my plan altogether, I will snuff out even the remote possibility of flying to Srinagar. In case the Delhi-Srinagar flight did get cancelled, I could utilize that time to spend time with my friends in Delhi.

Life lesson 2: Don’t back down. There is always a way to work things out. May not be the best way, but there is a way. Keep plan B ready. Take calculated steps. And a zing of risk does no harm.

And so, I took the 11.45 pm flight to Delhi. During the three hours wait at Delhi airport, I did not fret over the fate of the subsequent Srinagar flight. I lived in the present, happily chatting away with an Estonian woman flying to Assam.

Soon, it was time to board. I was cautious with my moment of happiness of ‘making it to Srinagar’ even at the time of take-off, because, until the plane actually landed at Srinagar airport, one could not be sure! I knew that the plane could keep hovering over Srinagar city, unable to land and turn back to Delhi! But on this freezing and utterly beautiful morning, the flight landed.

Life lesson 3: When things are not in your control, don’t spend your energy on the ‘why’ and ‘how’ of it. After a point, allow things to take their own course. Everything works out eventually. If not now, it will – later.

My first day at Srinagar – damp and cold

Now that I was in Srinagar, it was fair to assume that the distance between me and the tulip festival was minimal.

Nasir, a warm and well-read Kashmiri, welcomed me to his bungalow. The day was extremely cold at 3 degrees and cloudy. As I sipped on kahwa chai with shredded almonds, Nasir suggested that I should not visit the Tulip Garden that day. Reason – “If you visit the garden in the perfect weather, you will be truly spellbound. And tomorrow there will be sunshine. Inshallah!” I looked at him with a poker face. I wondered if he had any idea how long I had waited to feast my soul on the on-so-elusive tulips!

I paused for a while and consciously allowed my brain to override my heart. I thought to myself – ‘Nasir will definitely know better. He lives here. He breathes this air. He knows the DNA of the valley. So trust his instinct. If he says that tomorrow there will be sunshine, well – so be it.’

I decided to go with his judgment. He was visibly pleased. So, I spent my first day exploring alpine pastures and spotting Hanguls (the Kashmiri stag) at the picturesque Dachigam National Park.

Sure enough, when I woke up the next day, I saw golden sun rays playing hide and seek with the Chinar trees. Believe me. I could have kissed the sun that morning!

Life lesson 4: Think global. But act local. Trust in local capabilities. It is a storehouse of knowledge and insights. And of course – have faith.

My second and last day at Srinagar – so near and yet so far!

I was all set to go the Tulip Garden. However, I could not find any taxi to take me to the festival which was a good 9 kilometers away. That was when I realized why I could not access the internet since morning. The state by poll elections were on. And they did not turn out to be peaceful. The city was tense. The locals including taxi drivers and shopkeepers went on strike. And the state government had installed internet jammers.

So here I was. No internet, no GPS and no vehicle. However, Nasir found out that the tulip garden was not closed. I experienced that “so near and yet so far” feeling.

If you’ve come this far, give it all you got

I was not going to back down. I decided to walk it. The ‘distance’ of 9 kilometers was not a cause of concern for me. The worry was that the roads were barren. The sensitive environment kept everyone indoors. Security personnel stood guard at every nook and corner. I felt an eerie discomfort. As I kept walking in accordance with Nasir’s directions, my imagination began to run amok.

I had to reorient my mind. I began to focus on the landscapes around me and of course realized that I was amidst magnificence! The glass-like Dal lake was tranquil. Cherry and almond trees were in full blossom. Their pink and white flowers urged me to allow sanity to overpower fear. Finally, after what seemed like way beyond 9 kilometers, I read the board – “Indira Gandhi Memorial Tulip Garden”. I bought my ticket and entered it.

Well. What lay before me left me stunned. At an altitude of 5,600 feet, it was all I had expected and even more. There was a sea of tulips in shades and colors beyond imagination. Not to miss the massive willow trees, ice plants, lavenders and daffodils. Snow-capped mountains enveloped this rainbow like paradise sprawling over 30 hectares of land.

Beauty, intrigue, struggle and achievement – converged within me all at once. That moment – I believe – I became one with myself.

Life lesson 5: Destiny is what you make of it. This is your life. Whether its work or play – make it happen. Persevere. And never forget – High risk high returns!

My Journey From Artist To Artist Entrepreneur – Not Easy, But Joyous!

I Could Almost Hear People Think, “What Kind Of Woman Stays Away From Her Family?”