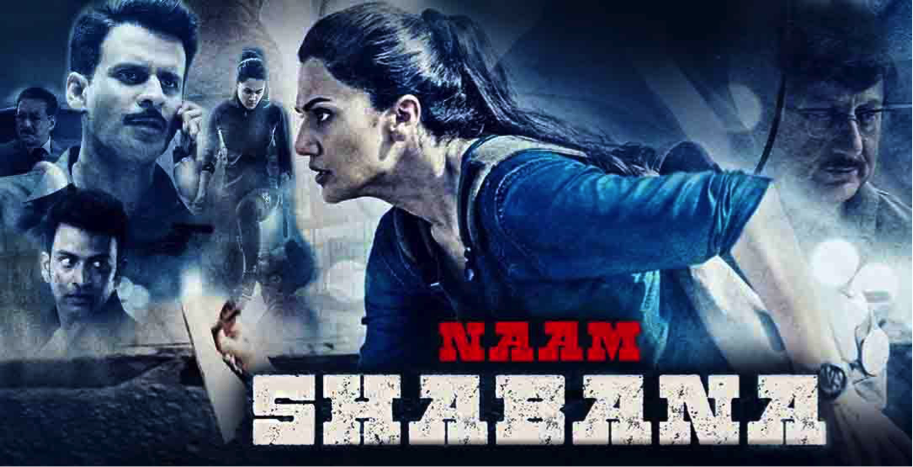 Naam Shabana Stands On Taapsee Pannu’s Shoulders – With Little Else To Carry It Through!

Naam Shabana is the story of Shabana (Taapsee Pannu) before she became a part of the Baby team. Set in the same universe, it tells the story of her recruitment and her first assignment.

Bollywood films aren’t known for their subtlety, nor do they have many kick-butt female action heroes. Naam Shabana does its bit for the latter but forgets that the lack of focus on the former could be debilitating too.

Naam Shabana opens  in Austria, where a major criminal mastermind, Mikhail, is under surveillance by an unnamed Indian agency. The program is monitored by Ranvir Singh (Manoj Bajpayee). The agents want to take Mikhail out but are neutralised themselves.The story then shifts to Mumbai and we are told through stray visuals that our lead, Shabana Khan, is a student of B. Com second year. She also practises Kudo daily. After an accident, she is contacted by Singh. He helps her in settling her personal scores and then sends her after Mikhail.

When the censor board certificate was shown, I was a bit perplexed with the 148 minute-runtime of the film. A spy action thriller is usually 100-120 minutes long. So I was interested in knowing the approach taken by the team behind this film. And I was less than impressed.

Taapsee Pannu as the eponymous lead of the film is solid. With her last few films, she has shown that she has the mettle to take forward the torch lit by Vidya Balan and Kangana Ranaut. Like the other two, she has chosen roles that are beyond the stereotypical ones our leading ladies have. And she has backed up the choices with some excellent work. Shabana lives with her widowed mother. They have a progressive family. She is a no-nonsense girl who doesn’t want to prioritize love over other things in life.

The characters, other than Shabana, are either underdeveloped or too stereotypical. For a film with a cast that includes Akshay Kumar, Manoj Bajpayee, Anupam Kher and Danny Denzongpa, the film doesn’t make even decent use of their acting prowess. Kher provides some comic relief in his guest role. Bajpayee seems to have been parachuted in from his CBI role in Special 26, a film with the same production team behind it as this. Akshay Kumar’s role is a parody of a master spy. In one unintentionally hilarious scene, he breaks into a hotel room from the balcony window to help another character get away. Instead of going back the way he came, he takes a circuitous route through the kitchen and lobby, risking capture. The best? You bet.

The music oscillates between the excellent and the absurd. Rozaana is melodious and will deservedly rule the charts in its run. But the rest of the songs are trash and completely out of place. The cinematography mirrors the pace of the film. There are long slow-motion shots and, like, miles of walking. The background score is jarring at times and looks like it was picked up from a jump-scare horror flick.

The major problem with the film is twofold. First, it wants to give us an awful lot of backstory. Second, it tries to spoon-feed every single thing that’s happening. It doesn’t think its audience is mature or discerning enough. Both these problems result in a movie that is glacially slow. A good 30-40 minutes could have been shaved from the runtime, tightening up the film in a way that’d befit its genre. As it is, it was a snoozefest.

Focussing on the ‘unsung heroes’ of our secret services is the new fad in Bollywood, at least for the last half a decade. With films like Ek Tha Tiger, Phantom, Baby, D-Day, Force 2 and now Naam Shabana, filmmakers are trying to fetishize the work of the intelligence community. And these films make it a point to tell the audience that the work of the RAW and IB guys isn’t appreciated enough. After a while, this repetitiveness becomes worse than the clichéd dead horse. Don’t they have any originality in conception left?

The film doesn’t show the agency in a very bright light. While we have ‘our best’ in the form of Akshay Kumar, the other agents are made to look totally incompetent and silly. For an agency that monitors thousands of potential candidates before selecting only 4, it doesn’t speak highly of them when those same agents  – armed – are killed like chicken by the unarmed villain. Also, the amount of surveillance at the disposal of the agency was creepy at best and scary at worst. This was surveillance on Indian citizens. The film makes us believe that this surveillance is good, never once bothering to think how such a Big Brother attitude might be grossly misused.

Ultimately, Naam Shabana works on the shoulders of Taapsee Pannu. In a messed-up, over-the-top film, her nuanced work is what keeps you interested. The night bike ride scene in the first half is one of the most beautiful scenes in the whole film, deliberate yet understated. Her action scenes are also well-choreographed. Keep Pannu aside and you have a screenplay and characters that are beyond pathetic. It makes sense for filmmakers to emulate Hollywood. But that also asks for superior scripts and far-tighter editing. The former falls prey to Bollywood’s classic case of unoriginality and the latter to the self-indulgence of the makers. It is a pity since both the industry and the audience deserve so much more.

Verdict: Despite a strong hero, Naam Shabana is a snoozefest of a thriller that fails to excite.

Have you watched Naam Shabana? Share your thoughts on the film and this review in the comments section.