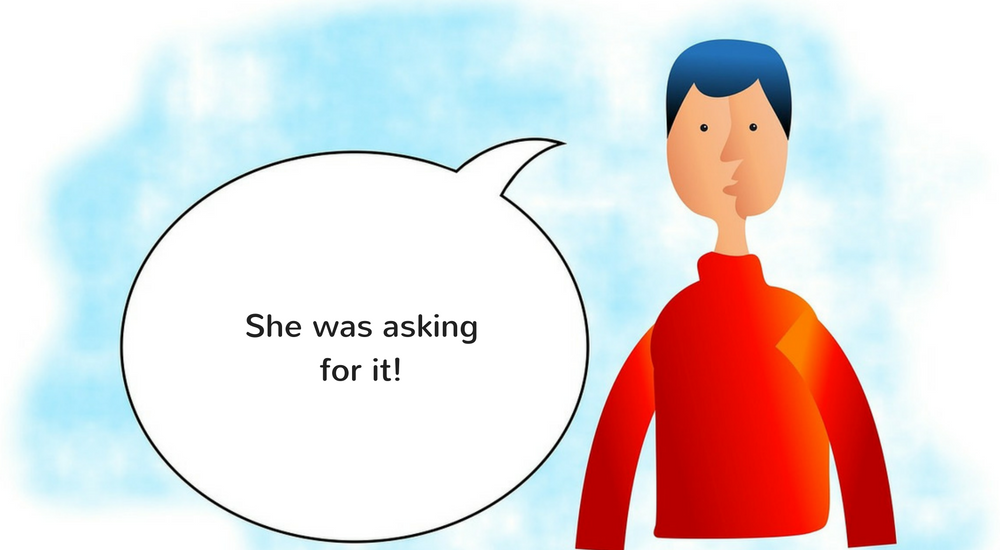 Confessions Of A Molester: She Was “Asking For It”

How do all the justifications of ‘she was asking for it’ embolden molesters and rapists to continue attacking women, and conveniently deflect blame? Here’s a look at how the mind of a molester could work.

I could see her toned skin and her milky thighs. Her open hair and that glossy lip. She was asking for it!
**

I could see you execrate me. Let’s make one thing clear – this whole molester tag is false. I only did what she wanted. She was asking for it!

I could see her bare midriff and cleavage in that nonexistent dress. Her navel seemed to be hypnotising me. She was asking for it!

I could see she had lost all decency — drinking with other men, laughing, shamelessly parading her body to all and sundry. This at 11:30 pm in the city’s main square when the whole country awaited midnight. Was there any doubt? Nah. She really was asking for it!
**

I could see the policemen on patrol, sitting in their cars or standing at the corners. They know she is of loose character. The way that policeman looked at her and smirked, I knew he knew that she was asking for it!

I could also see in that policeman’s eyes that he was sympathetic to me. There are a million rules in this country favouring the women. No one thinks of us men! He wasn’t going to trouble me for anything. I wouldn’t be harassed through courts on some false charges. Doesn’t the law say that it is okay as long as it is consensual between two adults? Well, that’s my clean chit. I was only tending to the lady’s request. You know, she was actually asking for it!
**

I could see what kind of a family she would be from. This was what Indian culture and values had denigrated to. God had made women to tend to the kitchen, stay under the veil/purdah and bear their husbands’ kids. She had no business being out here. By roaming out this late at night, she was asking for it!

I could see why she wouldn’t wear a saree. Or even a salwar-suit. She wanted to be devoured by men, as many as possible. She liked being beaten and used. I can identify such women with one gaze. They like being servile. Once you slap and hit them enough, they fall in line. They do as you ask them to. Had she worn a saree instead of walking around half-naked in that tank top and miniskirt, maybe cultured, sanskaari boys would have spared her. But dressed or, heh, undressed like this, she was always asking for it!

I could see the effects of rampant westernisation. Values and morals have been eroded completely. In the glorious past, we were always a honourable nation. We respected women and elders (never mind the Mahabharata!). And then these firangis came with their mill cloths and destroyed the fabric of our country (pun intended!). They brainwashed the innocent women of our country into drinking alcohol and mingling with men who were strangers. What I was seeing today was inevitable. Unhinged from her cultural identity, she was asking for it!

I used one of the three options I had :

It wasn’t my fault at all. When a girl calls nudity fashion and incites poor me to grab her and enjoy her body, what am I supposed to do? After all, even Gods have lost when faced with the wiles of women. I’m a mere mortal. Unless her mentality is rectified, she will, time and again, keep asking for it!

Don’t blame me. Blame the girl. Where there is gasoline, there will be fire. Where there are such loose morals, such incidents do happen! I gave it to her ‘coz, you know, she was asking for it!

P.S. : The Bengaluru mass molestations were a fresh blot on our national conscience. It’s high time men, Indian men, understood that a woman is an equal human being, not a toy or a property.

I’d love to have your feedback in the comments.

Editor’s Note: This post is not meant to be taken literally as a justification of molesters, in any case anyone missed the author’s true intent. This is a look at how, by promoting a culture of victim-blaming, we allow more and more molesters/rapists to continue deflecting the blame for their actions.

How I Managed To De-Addict My Toddler From The Screens In 6 Easy Steps!