Women often experience a loss of interest in sex after a baby, especially if they are juggling too many roles at one time and get too tired. A short story.

It was around midnight and Priya’s entire body was craving for respite. Her head was throbbing, her legs were heavy and her eyes were shut with the weight of sleep. She wished she could just close her mind and fall into that deep and comfortable lap of nothingness. But yet the pain between her legs and inside her vagina did not allow that luxury to come so easily. She was sore there. Very sore.

It was after almost two months that they had made love. The last time she had enjoyed sex with her husband Rahul was when they were on a holiday in Coonoor in December. Even then, she remembered she had been drunk with four pegs of Vodka. The long vacation, the absence of a mobile network, the long walks through the quiet campus of the resort plus the intimate and mentally stimulating conversation with Rahul had aroused her even before they went inside the room. Her one year old baby sleeping on the bed next to theirs hadn’t bothered her then. She had actually felt wetness between her legs, she had been excited. The “O” had been almost perfect, the first proper one after the baby. And the sleep after that had been the best she have had in the last one year.

But tonight, that seemed like a scene from a romantic Bollywood movie. Since after the vacation, she was back into her varied roles of a mother, a wife, a professional, a daughter in law and what not. The questions, the struggles, the problems of her routine mundane life had a cruel knack of squeezing the sexual passion out from her soul.

Rahul loved her dearly and never forced himself on her. And she felt sick when she didn’t respond when he spontaneously hugged her, when he kissed her on her shoulders, when in the wee hours of morning he got inside her rajai and squeezed her in his strong embrace. She wished she could feel as excited, and could respond as positively to his beautiful expressions of love. But often, she got irritated, shouted at him, and dismissed his gestures with a flick – as if it was something shameful and not important. Even if later she felt extremely guilty for her behaviour, she didn’t have the skill to make up and get back.

Today, Rahul was extremely happy as he had got promoted. She couldn’t hold him back after so long. But inspite of around half an hour of cuddling and kissing, she wasn’t stirred – she just played along. The soreness was expected as she had been completely dry during the entire act. She faked her climax – by now she was quite a pro in doing it.

Even one hour after Rahul was fast asleep, she was awake. By now, the sleep was gone and her back was aching. But her mind was more crowded with thoughts than anything else. She had expected this to happen – of course every woman feels a loss of interest in sex after a baby. “You feel like there is a dirty gutter down there” were the exact words of her friend Deepika. And Priya felt exactly the same – like gutter. But what she was absolutely unprepared for was the time she was taking to get over it.

She had expected that she would feel better after a couple of months of recovery. Or maybe after she lost a little weight. Then she thought it would come when she would start working. Then it was when she would stop breastfeeding. But even after her baby turned one; her passion for intimacy seemed so elusive, so far away.

Even today, the thoughts in her mind were – cabbage curry and cucumber salad for tomorrow’s lunch, need to call the electrician for fixing that plug, the baby needs a kheer for her breakfast and I still haven’t completed the weekly access management sheet, boss will fire me tomorrow, oops forgot to remove these earrings, its pinching in my skin and ouch, my hair, why doesn’t Rahul watch his hand. !$@#%#@% – exactly in the same order.

She had to talk to Rahul about it at any cost. Tomorrow. Yes. She didn’t realize when she fell asleep but when she awoke, she saw a smiling Rahul sitting next to her. It was 8 o’ clock, she was one and a half hour late. She tried to get up with a quick – “I am sorry, I overslept,” but Rahul pushed her back smiling.

Surprised, she said “Rahul, what’s this, let me get up, I need to…”

“…make lunch for us”, Rahul cut her short and completed her sentence.

“Yes. And the baby, she needs feeding. Let me just…”

Again, stopping her in the middle, Rahul pushed her back and said with an air of authority, “PRIYA. Just relax and listen to me. I have asked our maid to cook lunch for us today. She is already done, I guess. I have fed the baby and she is already playing in the hall. And, I have called the electrician, he will come around afternoon.”

Confused about what was happening, she couldn’t speak for a second.

Realizing her state of mind, Rahul added, “Jaan, I have decided to take a day off today. Why don’t you also stay at home? We will relax a bit. It’s a Friday anyways, it won’t affect work that much.”

“But I need to complete…”

Shocked to hear it, she asked, “But how do you know about the access management?”

Rahul came closer to Priya, caressed her face and said with a hint of sadness, “Jaan, you were talking in your sleep all night! You were talking about grocery, electrician, baby, food, everything randomly. I was already aware that something was bothering you since so many days. You did not enjoy our session yesterday, did you? I knew it. I was anyway thinking of talking to you. But, then at night I realized what’s bothering you when you suddenly started talking.”

Feeling guilty for behaving like this, Priya started to explain, “I am so sorry Rahul…!”

Rahul stopped her with his hand. “Why are you feeling sorry? It should be me who should feel sorry. I took a lot of things for granted and never realized what you might be going through emotionally. I was upset when you didn’t respond to my love, but I never tried to get you talking about what is bothering you.”

Priya was only listening.

“Jaan. Don’t you think that you are expecting too much out of yourself? Since the baby, you have made yourself accountable for every single thing related to our house. And that’s taking a toll. Can’t you see it?”

Priya could see it of course, but she never thought it could have any other option/solution.

“Please Priya. Stop being a super woman. You can never control everything. You have to let go of something. And no one is judging you – other than you. Believe me, if you don’t make lunch once in a while, it’s OK for me. I am happy ordering food. Also, with the baby, it’s ok if her meal timings are disturbed once in a while. She will ask us when she is hungry. But, please stop this crazy battle for being perfect. It will only give you stress nothing else.”

Priya was not sure if she understood everything that Rahul said. But somewhere, she could feel a weight lifting from her shouldesr. She was feeling a bit relaxed and lighter. Rahul was speaking exactly what was going on in her mind and she was feeling happy just watching him so charged up and excited.

Of course this was it – the one big problem behind her lack of passion, lack of happiness. She had been trying too hard, too much to impress – but impress whom? Rahul was already impressed and loved her dearly. The baby was far away from understanding. So she was basically trying to impress – HERSELF – and that too based on some idealistic and unrealistic notions of perfection she had herself created. And of course they weren’t real. It was amazing now that she realized it, but she felt really stupid that she realized it so late.

Rahul spoke for another half an hour after that. But Priya was really excited to realize that the solution to her problem was so easy to implement. And most importantly, it all depended upon her own. This was great.

It has been more than three months now. Priya is still struggling a lot everyday; there are still hordes of chores she has to complete and there are still stringent office deadlines. Yet there is always a light-heartedness about everything now. Of course, Priya doesn’t have sex every single day. But whenever she does, its almost a perfect “O”! And the sleep is calm and dreamless.

Author’s note: This is for all women who experience loss of interest in sex after a baby. For some, it’s for a longer period than others. And sometimes it’s also accompanied by depression, loss of self-confidence, problems with body image, mood swings etc. Please do not take it lying down. Get up and work on it. I am sure everyone can find a solution within the confines of their hearts and minds. 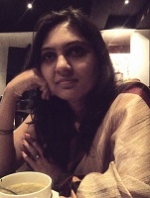