Talking To Samina Mahmood, The Amazing Woman Who Built An Iconic School From A Humble Beginning In Her Garage

Samina Mahmood began her school with a vision and a handful of students, and it has grown into a second home for the students she has known and loved over the years. 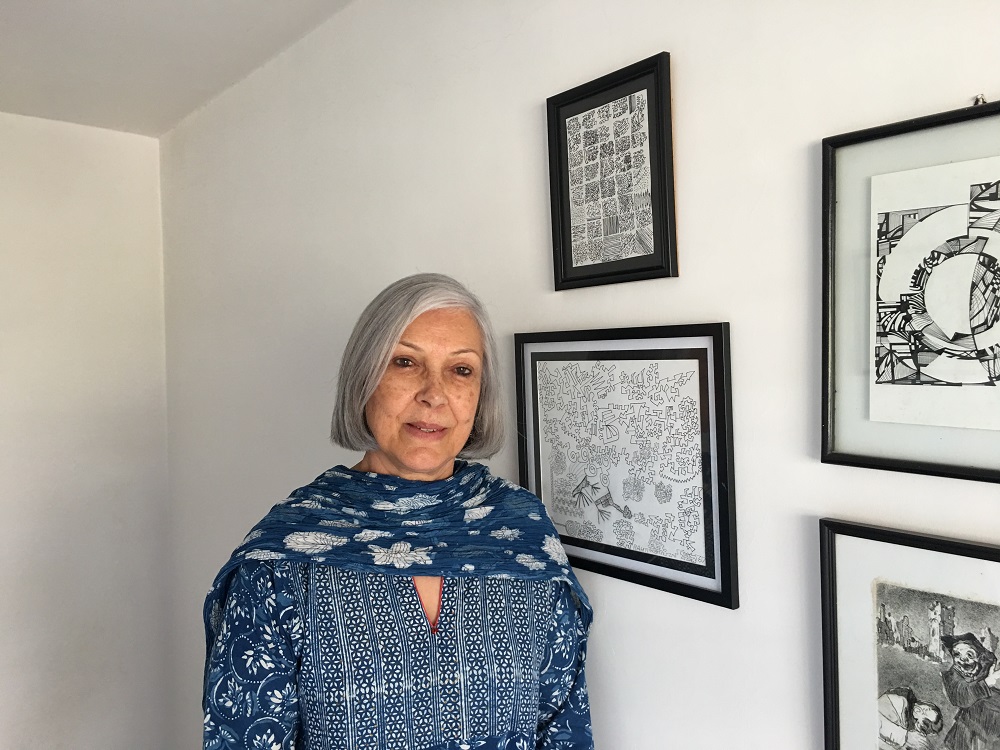 Samina Mahmood began her school with a vision and a handful of students, and it has grown into a second home for the students she has known and loved over the years.

On the 4th of July, 1984, a school was born. Contrary to how most schools are born, this one started in a garage of a woman who believed in education – a woman who had been recently bereaved. Her husband had left behind a business that she had no option but to close. But he had also left behind a passion for teaching.

Samina Mahmood, being a great believer in the Montessori method of education, began Head Start Montessori House of Children with just a handful of children, in her garage. The school in the garage where it all started

I got a chance to speak with Samina Mahmood, a woman who has so much to offer to the world, in terms of education, morale and humanity. Whom children gather around with love and joy, unlike the reserve that they might have for most School Principals. A parent at the school that I spoke to, shared some of her early memories when her child was in preschool – these are about her child running towards Samina and hugging her every day of school. Even older children feel very comfortable just dropping in to her office for a ‘chat’! She was the person who stood at the door to welcome every child with a 1000 watt smile and a cheery word, at every session at the House of Children, with the amazing ability to know every child’s name and their parents’ names.

Fondly called Aunty Samina by all those who know her, she believes that all knowledge cannot be found in a textbook. “Life is the greatest teacher, so naturally our learning environments should be relevant to real life situations,” she says.

The idea behind the school

Explaining the idea behind her school, she related that having seen students parroting all knowledge as expected by their parents, teachers and subjects, caused her some agitation, making her feel that children were being confined to a world that was created by others, and not a world of imagination that they both deserve and need. “I wondered why they had to give ready-made answers when they actually put things so beautifully when allowed to express their originality – in writing, through discussions and conversations, through art and music. I envisioned a place where children could be happy and find joy in learning,” she says. A great idea such as this needs an inspiration, and an inspired individual needs support. Samina Mahmood recalls that it was actually her late husband who encouraged her to start the school in 1984, being the one to select the name Head Start. After the demise of her better half, her three children and her own mother became the source of her support. She considers her son, Riad, joining her twenty years later, ‘special.’ “He has taken the school forward, and founded our High School, Head Start Educational Academy in 2005,” proclaims the proud mother.

Explaining her choice of setting up a school that followed the Montessori method of education, she says, “Montessori encourages us to see the ‘Child’ first rather than a method,” giving the understanding that each child learns in his/her own way and at an individual pace. The plus point of letting one’s child be a part of a Montessori is that the uniqueness of each student is respected and cared for. “Discovering the child through the eyes of Maria Montessori was somewhat like a spiritual awakening. It brought about the value of true knowledge as a connected whole and each one’s part in cosmic connectivity,” she recalls. Samina Mahmood with her students in class, early years

As someone who has been in the education sector for more than thirty years now, she has been a keen observer of the changes in the trends in education in terms of parents’, teachers’ and students’ expectations. She believes that more and more parents are becoming more accepting of their child’s individual interests, learning styles and abilities, even as some parents still look at success in terms of marks, grades and outcomes.

As someone who understands and deals with children and parents on an everyday basis, Aunty Samina states that, “Very often a parent’s demands are indicative of his or her own aspirations and ambitions.” More often than not, these do not necessarily fit the child.

She proclaims that as an educator, one of her primary objectives should be to pave the way for the child’s independence – independence for the child to think for themselves, be resilient and confident, which will help the child in gaining self-esteem. Therefore, making a child strictly dependent on their surroundings does more harm than good. So, the purpose of the Montessori is to help the child in achieving this self-dependence while also helping in coping with the parental demands.

“Maria Montessori believed in a ‘help me to help myself’ philosophy,” she says. The thought behind Head Start celebrates the emergence of discerning children at harmony with themselves and the world around them. “We often underestimate the abilities of young children and the Montessori classroom ensures that this does not happen,” she proudly states.

Montessori inculcates in the children a habit of working with their own hands; an ability to look after oneself with dignity through activities designed for the development of gross and fine motor skills; and an understanding that the senses are an integral part of our learning and development, both physical and intellectual, bringing about well rounded personalities.

Aunty Samina further states, “Reaching a point of understanding or so-called success is never possible in a moment or via a test or exam. It is a gradual evolution of different aspects coming together – the body, mind, senses, emotions; ones ‘being’ needs to be a unified whole, ideally coupled with an inner sense of harmony,” calling it an integral part of Head Start’s philosophy.

Some say that even if you become a teacher, a lecturer or even a principal, you keep on learning. Aunty Samina agrees with it. “Yes, we are constantly on the path of learning!” She says that one doesn’t know or can ever know everything in life. “Life is a mystery, and it is our inherent desire to know more that keeps us searching for answers,” is what she believes.

Aunty Samina believes that children teach us more about life than anyone else and it is their perspectives that helped her open her eyes and evolve in many ways. She narrated a couple of incidents that she remembers, when she learnt in a role as a student to her pupils. “A boy once told me,” she recalls, “there is perfection in everything and yet nothing is perfect.” Another child told her that one needs to make mistakes to become wise, and a blind child told her that he could “see” love. “This ‘special’ sight is way above the ordinary,” she says. This special sight is what is necessary for both learning and teaching humility and acceptance. “In an aggressive world, a child’s innocence and love are the answer to peace and harmony,” she says. The preschool as it is today

All in all, her story and her school’s journey (the school motto being: Our Tomorrow Is Today) has been a road full with many, many experiences. When asked what keeps her going, she states, “I would definitely say it is children – my own children and grandchildren, and the thousands of children that I have been privileged to know and love over the years.”

Aunty Samina beams with pride, accepting that these children and all the other pillars of support in her life give her a reason to wake up each morning! Let me you with the vision with which Samina Mahmood began her school all those years ago.