Mansplainers abound, who take their wives’ mildness for meekness, and adaptability for weakness. Until they realize that they are wrong! A short story.

Here is the third winner of our October 2016 Muse of the Month contest, Agamonee Barbaruah.

The cue was: “If I had low self-esteem, how could I have done what I did tonight?” – Anuja Chauhan, Those Pricey Thakur Girls.

The Other Side Of Her

“I asked for tea, not ice cream!” Vijay jeered at her, in front of his friend. Meera took back the cups to warm the tea. His friend looked at her, and then turned towards him, casually resuming the conversation.

Meera had burnt the bottom of her palm while pouring the tea from the aluminium kettle. That had got her to bring the tea a little late than the usual, piping hot cup that he liked. She put the kettle on the gas and ran the cold tap water on her palm again. It was soothing. The running water seemed to discourage the gradually forming burn bubble. She served the tea scalding hot, this time. Vijay smiled as he blew into the cup, smelling the aroma of the cardamom she had crushed in.

Meera put some Burnol on her burn and started dicing the vegetables for dinner. The friend had left by then. As she boiled the potatoes for the curry, he entered the kitchen. “What’s for dinner?” Vijay asked.

She turned back and said, “Paneer masala and roti-sabji.”

“Hmmm,” he said, adding, “achcha, please don’t serve cold tea, it’s embarrassing. I told you, if you can’t do something well, tell me. I’ll make it myself. Just don’t embarrass me in front of my friends.”

“I’m sorry,” she muttered, putting her hand on the spice counter.

Vijay moved towards the bedroom to change but continued speaking. “And what’s with the nervousness? Why so low self-esteem? Haven’t you seen my friends’ wives? They’re so smart and well-dressed and they engage so well in our conversations. Why can’t you be like them? I can’t keep telling them that you’re shy. Someday they’ll simply come to know…what I have been married to,” he carried on, as he changed himself into a pair of T-shirt and shorts.

The pressure cooker whistled thrice. The potatoes must be done, she thought, and turned off the gas. She then took the homemade paneer out of the warm water she had put them in and pressed it with her fingertips. It was soft. Her mother had taught her to do that, whenever she had to soften it. She hadn’t yet got her way with the new microwave Vijay had bought last month. She sliced a few onions and tomatoes for the masala.

“Are you listening to me?” he said, coming out to the living room.

“Yes,” she replied, as she put the tawa on the gas to toast the cumin and coriander seeds before crushing them for the masala.

“Try to understand, Meera. I have a reputation to maintain. You stay home, so you don’t understand. One’s spouse makes a great impact on how one’s career is going to be. How you look or behave, shows on how I am letting my household to be. People will stop taking me seriously if they see how careless or how tragically introvert you are. You have to come out of your shell. Sitting alone with your books, knitting or answering to me in monosyllables is never going to develop your personality. Do you get that?” he asked, this time, almost breathlessly, as his patience seemed to wear out with her steady one-word responses.

“Yes, I do,” she said, sautéing the vegetables in a pan and letting the masala cook in the kadhai simultaneously. Did I get the cream, she thought to herself. Oh right, I got the bigger pack. I wonder why they don’t get the tetra-packs. They’re so convenient and you don’t have to overuse them to stop them from spoiling.

He turned on the TV. The news presenter was talking about the Monika Ghurde murder case in Goa. “Singh has confessed to have noticed Ghurde from the first day they interacted. Ever since, he had been trying to get close to her, through some means or the other” – the TV presenter went on.

“Do you need another cup of tea, till dinner is ready?” Meera asked Vijay.

“No,” he said, and increased the volume of the TV.

Singh has also confessed that he had been putting up on the building terrace for three nights before he attacked Ghurde in her apartment.

“Huh?” she said, as she came out with a knife in one hand and garlic cloves in another.

“Watch this. You stay alone in this apartment the whole day. You should keep a watch over the men around. Stop talking to the guard at the gate. For all you know, he must be planning to attack you at home when I’m out,” he kept talking.

She returned to the kitchen. As the TV news took a commercial break, she heard a crashing sound. She looked out of her open kitchen window to see what had happened. There was nobody except the guard at the gate and the Gujarati couple parking their car in the garage. She shook her head, convinced that she had misheard something and continued cooking.

“Imagine what would have happened if someone tried to pin you down, Meera. If it was you instead of this girl in the news, you’d have been dead ages ago. But then, you wouldn’t have had the guts to stay alone like that, would you?” he smirked at his own joke.

This time the sound was audible enough for him to get out of the couch. “What’s going on? Is someone fighting?” he said and walked towards the door.

She lowered the flames and came out of the kitchen, following the screaming and crying noise that seemed to be coming from the apartment next to them. He opened the door and saw many other people, waiting outside their neighbour’s apartment, listening to the couple fighting and breaking things. Nobody dared to knock or try to enter.

“These guys are always fighting. Wait for an hour and he’ll come out fuming and leave on his bike till the wee hours,” said someone.

“And she will fake an injury for her blacked-out eyes in the grocery shop tomorrow,” said a lady next to him.

“I heard he gets drunk and beats her often. He lost his job recently and is bankrupt and she caught him stealing from her purse for booze. It’s nasty!” said an elderly aunty.

“Oh that’s why she walked with a limp last week!” a young man wondered aloud.

“Should we intervene?” asked someone.

“Nah! It’s their life. Why should we interfere in someone else’s life?” said Vijay and turned to look for his wife, who seemed to be missing.

Meera came back from her house with a broken shower rod from the bathroom and moved past her husband towards the apartment where the fight was going on, the woman’s painful screams getting louder by the minute. Before Vijay could stop, she rang the bell.

“What the hell are you doing?” said Vijay, trying to pull his wife away from the next door.

She gestured him with her hand and stopped him on his tracks, her eyes looking purposeful. She rang the bell three more times, till the man inside came to the door, opened and yelled, “What? What’s going on?” as he looked at the crowd, sheepishly peeping inside his apartment.

“Are you hurting her?” Meera asked.

“What?” the man asked, panting heavily.

“I said, ARE YOU HURTING HER?” Meera said to his face, holding the shower rod firmly.

“Who the hell are you to ask me? She’s my wife. I can hurt her or kill her if I want. Do you understand?” he shouted at Meera. “Yes, I am hurting her. And no, it’s not your business,” he said and was about to slam the door when Meera landed the shower rod, right on his head.

She entered the apartment, repeatedly hitting the man with the shower rod, on his arms, legs, back and knees, before he could gather himself to strike back at her. His bruised wife was standing at a corner. The crowd, followed by Vijay, followed Meera to the apartment, some speechless and some encouraging her to give him a good thrashing. At one point, the man caught hold of the shower rod and pushed it back in Meera’s hand, trying to pin her to the wall. In the middle of that struggle, as the crowd kept watching and Vijay tried to move forward to save his wife, Meera knocked the man’s groin hard, with her left knee and toppled him over. The man fell down to the floor, crying in pain.

Some of the residents came over and took charge of the situation, taking the injured man out of the apartment. The wife walked slowly to the front door, looking at her husband being taken away, wiping her eyes with the back of her hand. The women held and supported her. Meera looked at the wife once, as Vijay led her to their apartment.

The crowd dispersed soon and Vijay shut their door finally, after the situation came under control. Meera went to the kitchen and turned off the gas, pouring a glass of cold water for herself. Vijay stood near the kitchen door, looking at his wife, as she gulped down the water.

Meera took a deep breath, mopped the sweat off her forehead and smiled. Vijay kept looking at his wife, astounded by what he just saw. “What was that?” he asked.

“Nothing…I’ve just noticed the wife with bruises for a long time now,” she said, as both of them stared at each other for some time.

“Right,” said Vijay and turned to go back to his TV.

Meera resumed her work in the kitchen, a little smile, spreading from her lips to her eyes.

Agamonee Barbaruah wins a Rs 250 Flipkart voucher, as well as a chance to be picked one among the 10 top winners at the end of 2016. Congratulations! 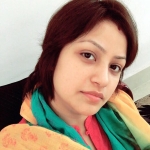