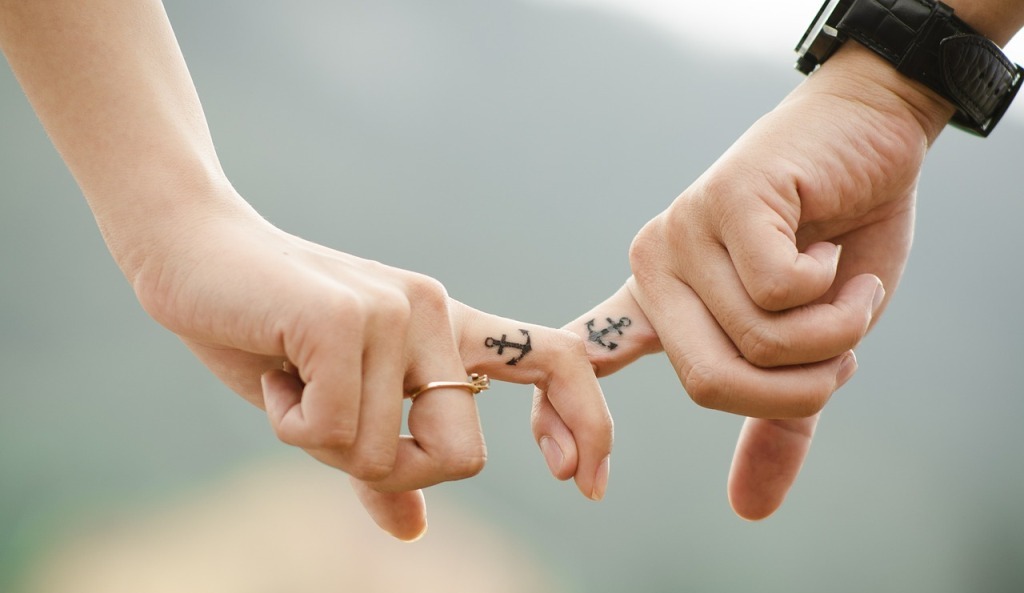 A Tale Of Love (An Urban Love Story)

In this tale of love, Trisha discovers that there are different phases in love. The real winners are those who don’t resign to adverse situations.

Trisha had met Sarthak in her college fest. A bubbly teenager, a fun-loving and a gregarious young lady, she loved the idea of ‘drinking life to the lees’. But, that was 9 years ago. Sitting in her living room, as she looks back in time, the mature suave lady smiles teasingly at that carefree, spontaneous girl. She gently wipes the whirlpool of smoke and dust, to take a good look at the lively concert ground.

“Ah ! there she is- the young and vibrant me, dancing to the tunes of a super hit number. Oh ! and look at my all-girl-gang, encircling the euphoric me, dancing and cheering with some grown-up version of the magical ‘mulberry bush’. I look pretty lost in the beat, don’t I? Those were the days”, she muses.

Her smile broadens, as she glances at a handsome stranger, standing in a corner, cheering and admiring Trisha, from a distance. He was too conspicuously handsome to go unnoticed. Trisha’s friends had already noticed and exchanged opinions about the ‘Greek God’ and his focussed interest in Trisha. Only Trisha was oblivious to his existence in that particular time and space. Its amazing how a perfect stranger, someone totally inconsequential, suddenly becomes so indispensable. A pure miracle. LOVE.

The oblivion did not continue for long, as her girlfriends animatedly whispered in her ears, about the good looking young man’s unconcealed interest in her. A cursory glance at him and thump! As Trisha’s searching eyes met his, she could feel everything around her fade… the sound, the people, the girlfriends, to the sole exclusion of that charming young man. Was she hallucinating? She smiled absent-mindedly, only to receive a smile in return from the dream man… a heart warming smile. She could barely concentrate in the beats or the songs or the merry-making. The magnetism was difficult to dismiss. Trisha had lost sense of time between exchange of surreptitious glances and pleasant smiles. She was jolted back to reality when one of her girlfriends, announced that they had to return home. So, there were no formal introductions or good-byes, just a sigh of disappointment. The college fest continued for 4 days and Trisha and her group of girls actively participated in it. She hoped to see the charming stranger again.

Trisha reached the fest ground with an atypical excitement and anticipation. She scanned through the portico and the lane leading to the concert hall, for the young man who had left a huge impression on her. However, the college campus was way too crowded, making it difficult for Trisha to find him. Ah, she would never see him again. This tendency to give up is so fundamental in us. As though, arriving at the speculated imaginary negative conclusion was an achievement. Trisha’s complacent negativity betrayed her when her wandering eyes spotted the charming stranger. They were destined to be acquaintances rather than two anonymous strangers as proclaimed by Sarthak’s firm introductory handshake. Trisha knew they were meant to be. They ditched the concert show so they could test drive the ‘friendship car’.

Strange familiarity about the unfamiliar

They went to the nearest coffee house to make the unfamiliar, familiar. Trisha and Sarthak were happy with a heartening discovery. There was a strange familiarity about the unfamiliar, helping them to chat on endlessly, without inhibitions. Friends, they were, right from the start. A bright relationship unrolled, thereon. Long telephonic conversations, dozens of messages and super long e-mails shortened the distance between them in no time. And the best part was the telepathic timing. It was magical- the freshness of the spontaneous connection. They lived in two extreme ends of the city but made time to meet at least once a week. What should they call it? This new friendship that was more than friendship? Sarthak had spelt out the nature of the relationship in his farewell email. No, it wasn’t a final good-bye, just a farewell to mere friendship and the beginning of the tale of love.

Sarthak had been selected in a top Business school, and he couldn’t just leave without opening his mind in unambiguous words, to his very good friend Trisha. The sleepless nights, the burden of unpronounced feelings for Trisha were driving him crazy and he couldn’t afford to leave without a clear mind. Trisha was elated to read Sarthak’s declaration in the ‘love e-mail’. She felt like a feather without the tremendous burden of her own unspoken delicate feelings for Sarthak. Distance only brought them closer as each waited in anticipation of the other’s voice, word or sight. Two years that felt like two decades drew to a close and Sarthak completed his post-graduation with distinction. He got hired in a reputed company with a handsome career prospect.

Despite his super hectic schedule in the business school, he didn’t miss out on sending a ‘good morning’ message and dialing a ‘good night’ call to his sweetheart Trisha. Trisha was busy moulding her own career as a  Psychologist. A few more months and she would be on her own. Sarthak was enjoying the feel of the new swanky corporate job. However, he missed Trisha terribly. He missed the weekend meetings with Trisha and her physical presence in his life, though he knew that they were together in thoughts. Trisha felt the void too. Life had lost its charm without those fascinating weekend meetings with Sarthak. The long telephonic conversations and messages could never fill up  that void.

One fine day, Trisha got a surprise afternoon call from Sarthak . She opened the door to discover Sarthak standing right outside. What a marvellously pleasant surprise! Sarthak had travelled on a weekday to propose marriage to Trisha. No one knew his little secret except for his darling mom . He got down on one knee and formally proposed to his beloved. It was a dream proposal for Trisha with red roses, chocolates and that precious ring. She would pause and replay the ‘proposal scenes’ in her favourite hollywood movies. Sarthak knew about Trisha’s fascination with formal proposals and followed exactly the same, though their custom didn’t demand a  formal proposal. The couple announced their marriage plans to their respective parents. Trisha’s parents were overjoyed with her suitable choice and happily started the  preparations for the auspicious wedding ceremony of their only daughter. Sarthak’s parents were happy to meet their lovely soon-to-be daughter-in-law.  Trisha completed her course in Psychological counselling with excellent grades . The soulmates got married to bridge the geographical gap.

Trisha loved her newfound role as the lady of the house. Passionate about cooking, she experimented with different dishes as she waited impatiently for her dear husband. The honeymoon in the backwaters felt like paradise and Sarthak treated her like a queen. Wasn’t this her dream life? She wanted to enjoy the first few months of her blissful dream marriage before investing in her dream career. They were the ideal married couple who loved and laughed and lived in harmony. Trisha got hired as a counsellor in a reputed hospital, a few months after marriage, just like she had planned. Their life was now a little more hectic between working Saturdays for Trisha and long/late hours for Sarthak. They kept the romance intact with surprise messages, calls and Sunday celebrations (since Sunday was the only day off for Trisha). Life was so perfect. A year and a half later Trisha gifted Sarthak a cute baby boy – Siddhartha.

Sarthak was the perfect dad, taking turns for lullabying the baby to sleep, changing his nappies, sharing the tough long sleepless nights for the first three months. Sarthak was a work form home doting dad. Trisha was so proud of her brilliant partner. However, Trisha couldn’t come to terms with the fact that she would have to wave a sad good bye to her almost-newborn, each day as soon as her maternity leave ended in 10 days. This was a huge dilemma – whether to continue with her career or to become a full-time mom to her cute little son. Sarthak, as always, assured Trisha of his support in her decision.
Finally, after an anxious week of assessment , she decided to take a break from her career  for a year. Sarthak became increasingly entangled in his taxing corporate life, while Trisha took over the reins of home-making and baby care. The couple would be too exhausted at the end of the day to talk or steal some ‘together time.’ Romance was a far-cry from their mechanical life. Trisha longed for the lost passion and intimacy in their relationship. However, the understanding and trust in her relationship with Sarthak helped the couple  stay strong  through the challenges, demands, bitter fights, disagreements and life’s vicissitudes.
Siddhartha is 4 now and has just started Kindergarten. Trisha has started working with an NGO for underprivileged children. Its Sarthak’s birthday today and what better way of celebrating it than reminiscing on the golden days/events of her precious past. Sarthak- her first love, her husband, the Father of her  son. Trisha now knew beyond a shadow of a doubt that love had its stages – the ‘lovey dovey’ new love, where one seeks out the newness of the new person , every single moment. In the  ‘lovey dovey’ phase the partner/lover is the centre of one’s universe.
The next phase was that of ‘content delight’ where the two people acknowledge each other of their mutual ‘love’ feelings and are happy to officially be ‘lovers.’ The two initial phases of love could overlap. The most difficult phase of love was the third phase that Trisha termed as ‘trials and tribulations’ where one comes face-to-face  with their partner’s weaknesses or face adverse/difficult situations as a couple . This phase was really the test of love. How beautifully the couple accept the not-so-love-worthy traits in each other and respond to the ups and downs of life,determines the success of their love. Its easy to give up but the real winners are those who don’t resign. The successful struggle in the third phase takes the couple to the final phase of love, that of ‘mellow adoration’ which is like a beautiful fully-blossomed flower, that is never to wither dry.
Trisha in her poetic tenor, writes to Sarthak

“ I have been since eternity, a silent seeking soul,

in you my search ended , my friend

And the ‘triumphant’ love, began.”

Sands Of Time. January 2016 Muse Of The Month Winning Entry by Kasturi Patra