Athlete Shanthi Soundarajan had been banned from running as she failed the gender test. Are we free, if we fail to conform to the norms of 'gender'? 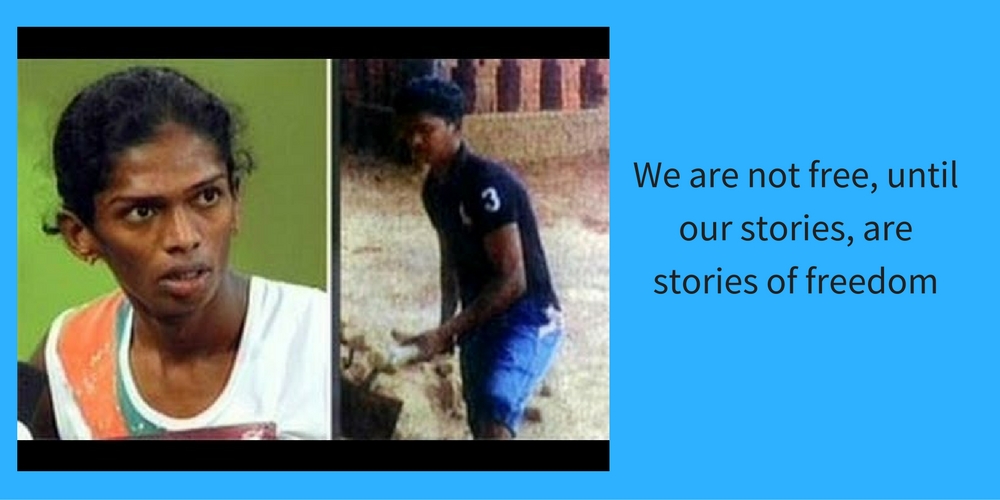 Athlete Shanthi Soundarajan was banned from running as she failed the gender test. Are we free, when we are penalised because we fail to conform to the norms of ‘gender’?

Meet Shanthi Soundarajan. Runner. She won 102 State level medals. 64 National medals. 12 International medals for India. With credentials like that, she should be out there in Rio, representing India like she rightfully deserves to, or perhaps out at other athletic tournaments, running and doing what she enjoys best.

And yet, she’s not. Why? Because she ‘looks nothing like a woman’ and failed the ‘gender test.’

I woke up this morning to this video produced by an App called Thappad. And rightly so, as it is named, the video I watched left me smarting, like a tight slap across my face would have.

What Shanthi’s story reflects is an unhealthy mindset that props up our social set up. This mentality puts forth the idea of a ‘norm’ – defining gender as a binary. The truth, though, remains that gender is a dynamic, not an either-or. Gender is not a function of one’s sex – which means that a person born anatomically as a boy could identify as a girl, or choose not to have a gender at all, or identify as a transgender.

That gender is being seen as a binary takes equality out of the equation: you conform to either, or you’re an anomaly. And within this (in)equation, the dominance of one over the other presupposes the astute lack of respect for the one that is dominated over. Consequently, the either/or is treated as an anomaly, and the neither, is cut out of the picture altogether.

The gender test is a term that has been used to describe ‘sex verification’ in the sporting world. It is a test that seeks to verify the eligibility of an athlete to compete in a sporting event as a member of a particular sex.

The raison d’être for the test has been allegations of male sportsmen competing as women, or of women having intersex conditions that offer an allegedly unfair advantage. The first mandatory test was in July 1950, at the behest of the International Association of Athletic Federation (IAAF), a month prior to the European Championships in Belgium. These tests were introduced at the Olympics in 1968.

At first, they were physical examinations – then  they became chromosome tests, and then, testosterone tests. The tests, however, have an inherent flaw. Determining one’s gender is not a matter of a bunch of checks for XX or XY chromosomes or the level of sex hormones to determine whether one is a man or a woman. Science suggests that a foetus begins undifferentiated – the Y chromosome turns on scores of hormones to effectively differentiate the baby as being distinctly male. And scientifically, sometimes, this does not even happen. Hormonally, a person with two X chromosomes COULD develop as male, and a person with an X and a Y chromosome could develop as a female.

And so, instead of proving anything apart from a patriarchal segregation of the ‘ab-norm’ from the ‘norm’, these tests fail the test of logic. There have been so many horrible instances where women athletes have been humiliated and have even suffered human rights violations as a result of these tests – and these violations include FGM (Female Genital Mutilation) and forced sterilization.

Shanthi’s story reflects our obsession with patriarchy, and of observing gender as a binary norm rather than as a fluid element of one’s identity that is not confined to what one’s anatomy suggests. The inappropriate segmentation of the genders is what feeds a culture of discrimination, deprivation and violence. This inappropriate segmentation of the genders is both, a cause and an effect, of patriarchy.

Patriarchy literally means rule of the father in a male-dominated family. It is a social and ideological construct which considers men (who are the patriarchs) as superior to women. Our first lessons in patriarchy commence with our families.

Specific roles and conduct are ascribed and are expected of children of both sexes – and with that, a subliminal understanding of the bifurcated statuses is set in place. This is then systemically built upon with time, as children grow to become adults that encourage and perpetrate the same beliefs, and a continuous cycle is then created. Thanks to this, patriarchy remains a part of the social fabric, propping up gender inequality.

Patriarchy is structured around an institution of power-based relations. It segregates the sexes and crafts ‘gender roles’, or thresholds that it predetermines as acceptable for men and women, and expects conformity therein. While the underlying element remains the same, i.e., control, the manifestations of control vary with other social attributes such as class, caste, religion, region, ethnicity, traditions and socio-cultural practices. It is this horrible ‘control’ that keeps talent like Shanthi away from success, and puts them right in the jaws of harm.

This independence day, it will certainly do well to appreciate our history, doubtless. But this time, let’s look at ‘HerStory’, and act better. We are not independent until all our stories are stories of freedom, equality and achievement, where we are valued for who we are, and not bent out of shape to conform to a patriarchal notion of what we should be.