Musthafa PC, the man behind iD Fresh Foods, has built a Rs.100 crore empire, but values his role as Dad above all. A Father’s Day special. 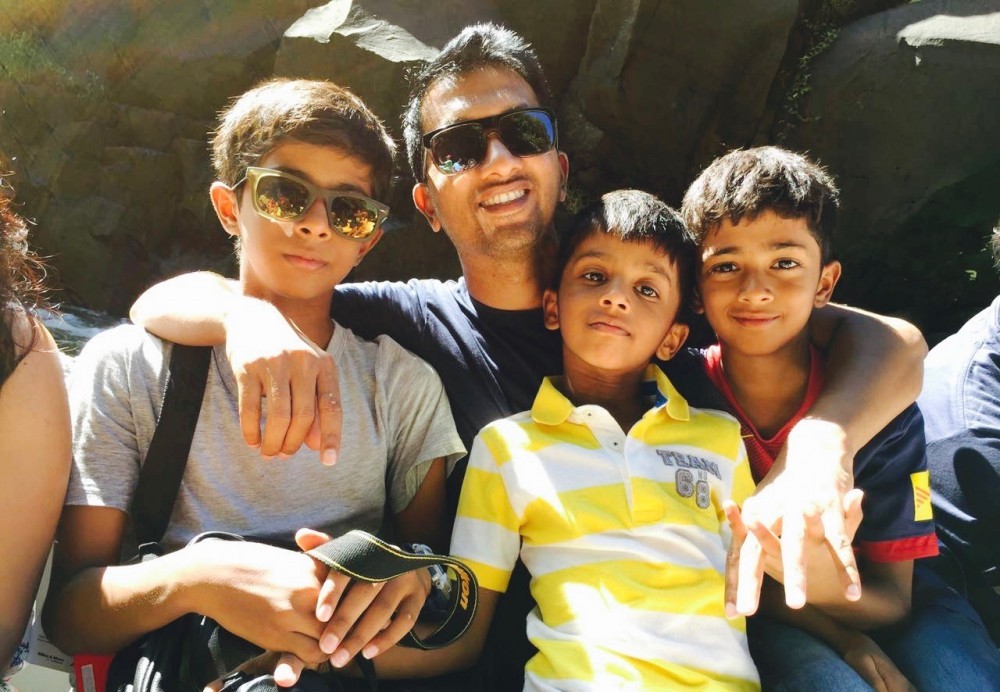 Musthafa PC, the man behind iD Fresh Foods, has built a Rs.100 crore empire, but values his role as Dad above all. A Father’s Day special.

iD Fresh Foods has become a household name with many of us rooting for their ready to use dosa/idly batter or the parotas that sure are a life saver in a time crunch to cook. Established in 2006, iD now serves about a million idlis in 10 cities per day.

On the occasion of Father’s Day, we chatted up with Musthafa PC, to know the father behind the big bucks entrepreneur. I must say, it was more a humbling experience than an interview. A down to earth person, whose personality and values reflect in the iD brand too, Musthafa is a proud father of three boys – Alif, Ilaan and Ahad, whom he fondly calls the ‘3 musketeers’.

As we begin to talk about fatherhood and his children, an amusement, more so a warmth radiates from him as he reminisces on the birth of his first child and how he wasn’t in town when he was born but how clearly he remembers his flight journey as he travelled to see his child. “I cried!” is all he says when asked about how he felt, but emotions flit across his face, truly expressing the joy he must have felt on seeing Alif (his first son).

Being an entrepreneur takes its toll on you, with the need to build the company but also the guilt you feel of not being able to spend time with your children. Work-life balance was sure out of the window when iD was established and growing at a pace that needed all his attention.

Musthafa says, “It was hard then but now with a core team set at iD and things stabilizing, I get more time with my kids, to talk, play and be with them. But when you are with your kids, any amount of time is never enough.” He fondly talks about how hard his dad had to work during his own childhood, not being able to give enough time to the children as he had the responsibility of everything on him. “I am a more jovial father who spends time and likes to play with my kids. My situation is quite different as compared to my dad”, he adds, trying to clarify that he is proud of his dad and everything he has done for them. Of course equations between father and children are changing today, bringing them closer, with fathers playing an active role. “None of my kids want to join iD,” laughs Musthafa, as a proud father who respects his children’s choices, wanting them to choose their own paths. Adding to it, he says, “Two of my kids want to become soccer players and one wants to work in Pepsi as he wants to drink it off the line. I want them to do what they like.”

iD being Musthafa’s brain child, you realise how passionate he is about it, more so on what the brand should stand for: Trust. With this thought, iD TrustShops have taken birth and are setup at about 40 apartments with an aim to reach 1000 shops by the end of December 2016. He excitedly tells us that the concept has a simple aim- to bring back the value of ‘Trust’ in the society. iDTrust shop is a fridge with iD products set up in a residential community or place of work and are unmanned with just signs that say, ‘We trust you’ and a box to drop in the money for the product you pick.

He tells us the rationale, “iD TrustShops are not about the brand, but they are bigger than the brand. It need not be just iD but would be a collaboration of brands to try, to trust. The customers trust the brand, it’s time brands trusted customers.”

Triggered by the conversation over iD TrustShops, we prod him to tell us about that one value he would want his children to imbibe. Without a moment’s thought, he says, “Honesty! That’s what takes you places. You should be honest about your work and do what you believe in, more so keeping up with your ethics than anything else.” Ending the interview on a high note, we requested him to share a message to fathers. Noticeably amused at the question he says, “All I would say to fathers is, try and spend as much time with your children because you are going to regret it later on, if you don’t now”.

On that note, this Father’s Day, it’s time to dads too to reflect and ask themselves the same questions that moms have been asking all along, “Am I there for my kids?”