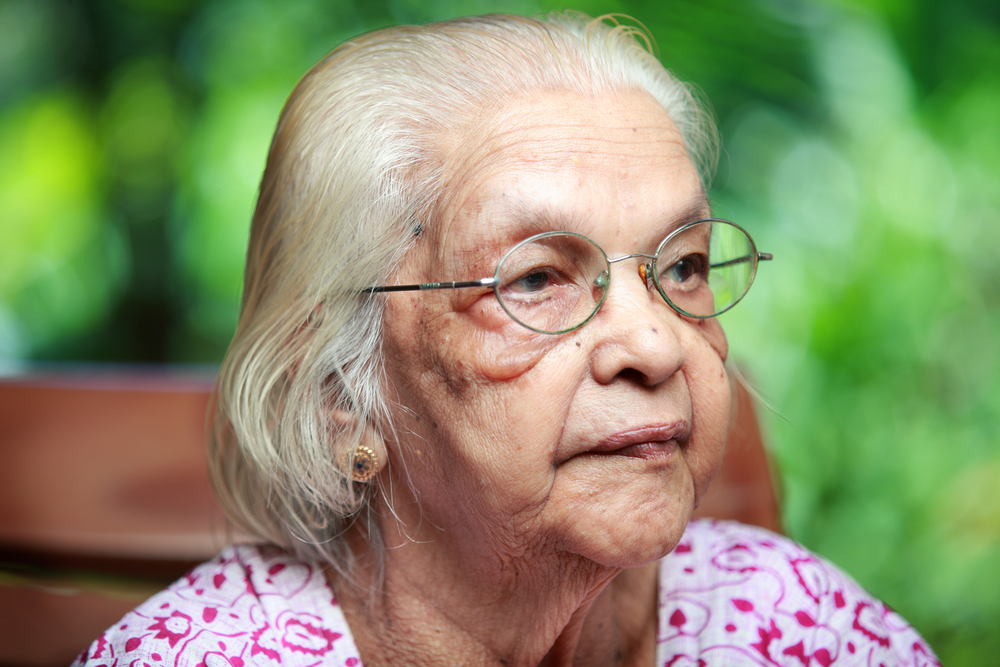 Visible? A young woman, even if she wants, can never be invisible. Those around her won’t let her be. They want to control her. She is a daughter, sister, prospective sexual partner. (Surprisingly it all boils down to the simple fact that the society/patriarchy feels threatened by female sexuality.) A whole new genre of literature can be ushered in if the women were asked to narrate stories of all the times they have been felt up without their permission in domestic as well as public places. Everyone will have some anecdote to contribute.

So, how does this woman become invisible?

It is only in the fifties or about, a sense of closure comes to her at the price of losing herself as a sexual being. From this point, she may begin her journey towards being invisible.

Exceptions aside, in our society a woman becomes invisible when she becomes old, and almost without a trace when this old woman is sans husband too. If you pay attention you will come across many such women languishing in their slots. At this stage they are ‘mothers’ (or aunts) – old, useless, peculiar, tiresome, ever-complaining grumblers, full of their aches and pains – keeping a corner of the house unnecessarily occupied.

The grown up generation is waiting for them to depart because already they have marked their belongings as their own and she, anyway, has served her purpose, outlived her use. The family simply means that you share a bloodline and nothing more. The failing eyesight, hearing, mobility – all cry for a helping hand but there is no one to help them to make the transition into the now unfamiliar realm which once was familiar.

Ask around, we know it’s a big problem but most of us, especially in middle class, insist it does not happen in our families.

Dealing with the invisible woman

This invisible woman has all the bearings of respectability. She will be given a room, even a pooja room. She will be aired before the guests, brought out of closet existence and made a spectacular display of in the drawing room. On such occasions, the DIL will be very deferential in serving her because to the outsiders it gives the picture of perfect domestic bliss – three generations living harmoniously – a sense of wholeness, traditions, culture. Guests depart and it is back to lonely meals and no participation in family life.

The grandchildren pick up the clues from their parents. Tots and toddlers, who had basked in granny’s affection adopt the same frozen attitude towards granny when they turn teenagers. They do it in small steps. At first, they use the same tone and words which their parents, especially the mother uses for her and when no one frowns on them, they adopt it thinking that’s the natural order, yeah the pecking order.

Even the servants realize who pays their salary and behave accordingly. For the much needed social interaction, the old woman is reduced to turning to them and fearing the mistress’s wrath, even they refuse to heed her.

Being short-sighted when it comes to relationships

Why does she become invisible? Years ago when the Son-in-law (daughter’s husband) and DIL (son’s wife) had entered the family circle, she had given them different treatments – pampering one and trashing the other. If only she had given the DIL, who was smarting from the pain of being uprooted, a part of the warmth she had accorded the Son-in-law, today the story would have been different.

DIL and MIL both look at each other through the distorted cultural lens as they have already been handed over all the preconceived prejudices by the well-meaning people surrounding them. They fail to understand the transactional nature of the relationship. They are both the victims of ‘trickle down hostility’ patronized by patriarchy.

When on her entry into the family, DIL was standing at the margin the MIL – at the peak of her center stage glory days – had made no effort to include her, had rather treated her as a competitor. Now the change of power is complete – the opposition party has become the ruling party. And we all know that after coming into power the ruling party always practices the politics of revenge and vendetta.

So, on the domestic front, the DILs have taken over the reins of the household. To flout MIL’s norms is their aim. They had to bear her autocratic (!) ways for so long. Now is the time to settle the score, to goal equalizers and winners, to set the record straight.

The son takes pride in not being a henpecked husband or a mama’s boy. In the beginning, he had tilted to either side once or twice but had caught himself up soon. Oh boy, he had really seen some samples in his time and had ensured that apron strings too were cut off like the umbilical cord. He is a man of the world, detached; bearing a “these-women!” look. He won’t give his wife an inch because he knows she will take a yard. He won’t let anyone of them be possessive of him. Kind of harsh, no? He is not to be bothered. He won’t belittle himself by getting involved in feminine politics. It is beneath his dignity because he has this lofty opinion of himself that he is a balanced, dignified person. After all, he is the provider, who is keeping ‘wife’ and ‘mother’ under the same roof.

He is ready to turn a blind eye to all the atrocities of one over the other. He has a long practice of doing so. He had started doing this from the day he got married. Wife and Mother were two opposite goal posts and he, poor thing, was too baffled to even realize to which team he belonged, or be the impartial referee which should have been his role. (Here women are in a better position; their loyalties/foes are clearly defined – it’s a territorial thing after all.)

Instead of mediating, arbitrating then too, he had chosen to keep quiet. Untangling the wires involves too much of energy, time, patience, maneuvering, intelligence, emotional heartbreak. So let the women do whatever they do! Self-satisfied and patting himself on the back (though on the shoulder will be easier!), he chooses to be the Superior Non-involved one, availing the services of both.

Now the DIL is at center stage. Little wonder if MIL is marginalized. Agreed, it is DIL who plays the lion’s share in making her invisible – but the responsibility lies with the son also who makes no effort to stop his wife. ‘I-am-too-busy-earning’ and ‘don’t-bother-me-with-these-small-skirmishes’ is his stance.

Money and other matters

One reason can be that this old woman is often without financial securities.

Another can be – even if her late husband had left her with financial security, she was too gullible, amenable and was forced to part with it. Or, the best under such circumstances is she lives as a paying guest – her presence is suffered for the financial contribution she makes or for the house which is legally still hers.

Still another reason can be she had always lived under her husband’s thumb and had never learned to take any decisions on her own. So she is at sea when it comes to the decision of walking out when the going gets tough.

Or, simply she is afraid of the loneliness, heck no – of being alone, of managing the nitty-gritty of daily life (how will I get the gas cylinder, veggies, withdraw money from the bank, visit doctors etc.) on her own. She rationalizes the status-quo by using the lok-kya-kahange principle and thinks she is guarding the respectability of the family. It’s a self-delusion.

No doubt she is a mature woman; she shouldn’t strike back on the tit for tat basis but she shouldn’t take it lying down. Perhaps as members of a hypocritical society, we are all trained to disregard the reality of what we are for the sake of building an external image – DIL, MIL, Son all included.

The last and not the least reason of being neglected can be that she had really been a vamp MIL – the Lalita Pawar-type and is getting her just desserts. But such a MIL will not take it lying down quietly. She will do her best to embarrass her DIL and son. She won’t evoke sympathy.

As far as damage control is concerned, it has to come from the male side. Women internalize patriarchal values and cause havoc in each other’s lives. In youth, a son because he is a husband must support DIL’s justified needs. In middle age a husband, because he is a son also must save his mother from becoming marginalized in his wife’s kingdom.

He should make both the women feel they have access to him. His casual inquiries to his mother in the passing “All right?” are not enough. If the sons want to take a quantum leap two things that matter are desire and belief. These sons should look at themselves. What kind of a person do they sound if they have an invisible woman in their homes? Heartless, indifferent, ungrateful, cruel. They should persuade themselves that these negative epithets are going to change.

Try using the forgotten childhood way of making a decision by tossing a coin. You watch enough cricket, so you know what it is. Assign what head means, say it means you look after your mother to your full capacity. Flip the coin and if you hope it lands on heads while it is in the air, then hypocrisy apart regardless of what the coin does, what you subconsciously want was just revealed to you.

He can daily take out ten minutes out of his busy schedule and sit with his old mother quietly. Even if she doesn’t talk because she is too hurt and withdrawn, he can sit quietly with her daily. Gradually she will absorb support, the all-is-well feeling from his presence. Psychological resilience is a very human character.

She has given you the best years of her youth – tended you, looked after you – fine, it was her duty, she did not oblige you; you did not ask to be born. But biology apart you cannot forget the emotional care she showered upon you – only ten minutes of your time daily. Stop procrastinating.

How Confident, Educated, Outspoken ‘Modern’ Me Had Also Been Insidiously ‘Trained To Be Invisible’