The art of conversation is getting right the balance of what to talk or not to talk. So what are the dos and don'ts of it? 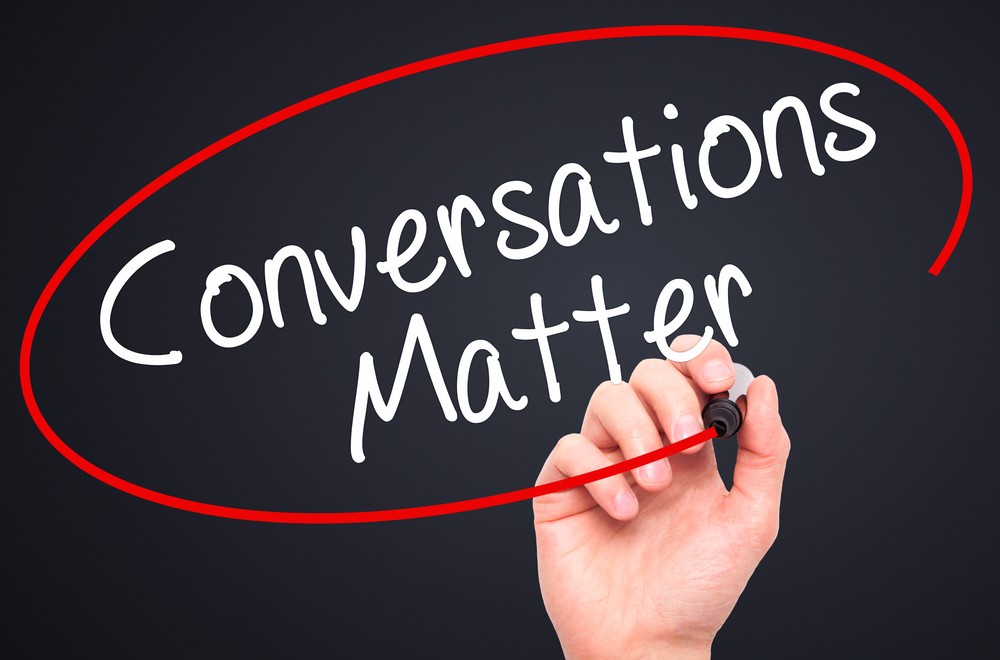 The art of conversation is getting right the balance of what to talk or not to talk. So what are the dos and don’ts of it?

“Small talk is the appetizer for any deeper relationship.” -Debra Fine.

Human beings are social creatures. Nobody can live as a loner or without expressing themselves to others in form of conversations or communications. It was only possible in old times, when sages and saints could survive in jungles without eating, drinking or conversing.

Face to face conversations have been replaced by social media.

The modes of conversation may have changed in form of messages, forwards, comments, shares or likes on social sites but we still believe in being touch with each-other. For some people talking is like oxygen – they really need to to express themselves to function, even to survive.

It is said that Britishers mostly talk of the weather when meeting for the first time or visiting strangers – it is said to be safe and staid when there is nothing else to talk about.

Numerous institutes are earning their bread and butter by teaching the art of conversing. To groom aspirants, to face interviews, gain confidence in expressing themselves, present themselves verbally, selection of words, poise, tone and tenor, for all this intense training is being given.

But talking in day to day life does not require formal training. It is all about self-learning and experience gained over the years. Well that is the only formula for success in this regard. Some still fumble and stumble about this. Some fall in the category of being extroverts – talkative, outgoing, being social. On the other side we have the ‘me’ types, who are introverts, reserved, snooty, snobs and nerds as well.

At times, for the latter category, the day to day conversation becomes more of a chore, where no fun or involvement is there, and is more of monotonous task to be performed.

I have a relative whom I dread to meet. In fact the whole of my family feels this way. The moment I see her coming I take a detour. Not that I dislike her, but she is a long winding bore. She is a very talented lady, who can talk on any subject under the Sun. But the talks are endless, almost always solo. She has no sense of time, place or a limit on the topic. I often need to forcibly make her stop, even when I can’t get in a word edgewise at times.

Recently a mother was scolding her five-year old for not being shy and timid in a large group. She publicly declared her displeasure of having a quiet child. The child could not keep up with her expectations of being more talkative. It was clearly an unfortunate mismatch of parent and child expectations.

An old uncle in the neighbourhood is a well behaved gentleman when we meet him socially. But as the night progresses, the true talkative self of him comes out. Two pegs down, uncle is all chirpy and jolly. He goes on non-stop with his one sided talk on his childhood to youth, but next morning again we find him taciturn and unable to be expansive.

Then there are many who are really well read and knowledgeable, but moment they strike a conversation, the straight line of talk takes diverse tangents of topics.

Even resumes longer than a page are passe now-a-days. Short and sweet is the new formula. People have less time and patience. Give and take of ideas is the happening thing, but it has should not be rambling. And it has to be both sided.

Advertisements have the limit of 30 seconds to send across their product, whether a car worth lakhs or a biscuit pack worth 5 rupees. Short and crisp policy has to be followed, minimalistic is the requirement of the age because brevity is a virtue of today. Less is more. Oratory needs to be limited to political speeches and debates only. On the other extreme are some people who refuse to open up and talk about anything.

Good conversation is not a monologue but exchanging of ideas and words in a right measure between two or more parties, one cannot be a mute-spectator in this.

It happened with a relative of mine who was recuperating from his gall-bladder stone removal operation in the hospital. A certain uncle X came visiting my relative. Without uttering a single word for almost an hour, this uncle kept looking at the prescriptions, medicines, nurses and my relative.

Instead of breaking the ice and asking the patient about his well-being, he sat there with a remorseful look. The patient asked him, “How are you?” To which uncle responded with his monosyllables! May be he was avoiding conversation in order to not cause any exhaustion to the patient. But his silence and blank look was just upset the poor patient.

Some are actually experts at bombing a conversation. With their ‘foot in mouth’ syndrome they land themselves in troubled waters. At times we deliver our punches like thunderbolts to others which cause embarrassment to us as well as others.

For instance in a family function a thin lady, in order to strike a conversation with a slightly plump one ended up asking her about her delivery due date. The other one just snubbed her by saying that she was not married yet!

There are some cardinal rules of conversation. If followed religiously we can achieve a good conversation. Otherwise, ‘silence is golden’.