Gifting The Differently Abled: The Journey Of Prarthana Unkalkar Kaul

The inspiring story of Prarthana Unkalkar Kaul, who is doing everything possible to work for the differently-abled people through her NGO GiftAbled. 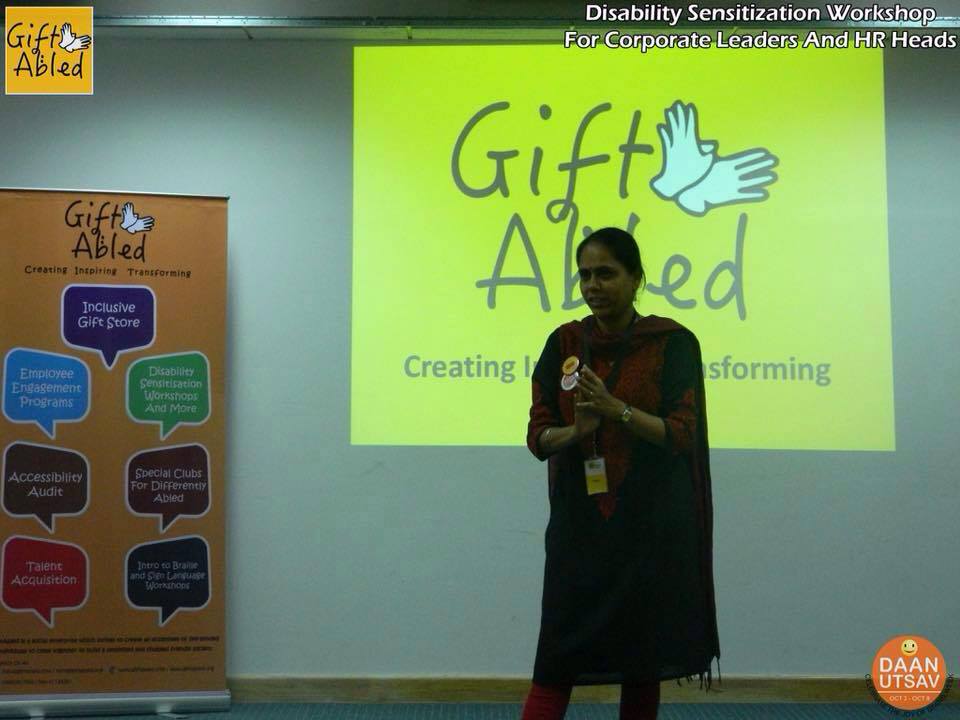 The inspiring story of Prarthana Unkalkar Kaul, who is doing everything possible to work for the differently-abled people through her NGO GiftAbled.

You meet her and you will be a part of a laugh riot. Meet Prarthana Unkalkar Kaul, the founder of GiftAbled, who has touched so many lives in such wonderful ways, that when you hear her story you want to believe that the world has such wonderful people. And maybe you want to do something like her. But when you meet her, she makes you feel at home with a joke.

Prarthana was born in a beautiful town of Dandeli, in Karnataka. She was the youngest of three siblings. Her father worked in the local paper mills. Her childhood by her own admission was carefree. She was above average as a student. She did her schooling and college from Dandeli itself. In college she was very popular as she helped students who came from a vernacular medium study in English.

At 19, when she graduated, she came to Bangalore with CA plans. But after 3 and half years she realized, CA was not her cup of tea. In the meantime she was also doing her MBA from distance learning.

After calling quits on her CA she joined IBM, where she worked for 2 years. During those two years, she taught a blind student. She says that probably that student of her was the first student ever to graduate from IIM Kolkata. She used to teach every weekend, but then she realized that it requires more time than just the weekend. As if the Universe heard her calling, she came across iVolunteer – that work primarily with volunteers. They were looking for a Relationship Manager. Prarthana jumped at the opportunity. She just put her papers down at IBM and joined iVolunteer, and her life changed forever.

At iVolunteer Bangalore Prarthana found her passion. Her work included organizing events for volunteers. In a busy city like Bangalore, it is not easy to find volunteers for events. But Prathana made sure she did. She spoke out in as many forums and media as she could on the importance of giving some time of our lives to volunteering. Gradually many people joined her. She says that her greatest joy was when she would organize events and wonder if the volunteers would really turn up, but to her surprise, each time they did.

In the meantime she got married and started to live in a joint family, with her parents-in-law and grandfather-in-law.When asked if it was difficult to pursue this passion after marriage as her work involved staying away at weekends at times, she said, “But my parents and in laws have been very supportive. My father is a Vedic Maths author and teacher and also a musician, so whenever I went to volunteer for teaching or play some songs, I would take him along, and he would teach too or play musical instruments.” As they say, “Charity begins at home.”

Prarthana says that when you go out to do something like this, it amazes her how many lives at the end of the day one can touch. She would mobilize as many volunteers as she could. I asked her to share some of her experiences that moved her. She added that there were many. But there is one that stayed with her.

She had started organizing events in a cancer hospital. She said that people stay in that hospital during their last stages. She went there with her team and organized an event making sure that the patients laughed. One young boy of 22 had throat cancer and in her event he even managed to sing. He was in his last stages. After a few days, Prarthana, went back to the hospital and was told that the boy was in the ICU and fighting his last battle. She went to see him. Though he was almost unconscious, he could recognize her and through his hand movement he showed the energizer that Prarthana taught everyone in the event. That was his last day with life.

After some silence, Prarthana says that, we never know, the way we can end up influencing someone’s life.

8 years passed with iVolunteer. One fine day her husband had an event with differently-abled people, at his workplace. He asked her what he could gift them.  They were blind students. Prarthana said that may be musical instruments. But that was when her husband reminded her that when they think of giving something to a differently-abled person, the thought of their disability comes first. They should rather think of them as people first. That was when the idea of GiftAbled, germinated. Prarthana thought may be it was time, to start working for a new organization she could create herself. One more time, she put her papers down.

Starting her own NGO was not easy. Her husband financed her in the places she needed. Once again she tied up with different organizations that are working for the differently-abled. She again started speaking up and volunteers joined in. That is when she talks about how difficult it can be in India to be differently-abled.

She came across an instance where there was this deaf couple where the wife was pregnant. They did not have someone to guide them properly. They did not even know, that the water had burst till next day by which time the baby was dead. Another blind couple called up Prarthana to send a volunteer as they were going to the hospital next day. Volunteers helped to run around for food and medicines in hospital but they lost their baby on the third day, because it was born malnourished and the mother hadn’t taken care of herself properly.

She speaks about how girls who are differently-abled would not go to hospitals because communication was a problem. When Prarthana gave an awareness class on breast cancer to blind girls, she realized that even though they had issues, they would not go to hospitals, because of the same communication problem. Now Prarthana started sending volunteers to patients each time they needed medical assistance and interpreters.

Though much needs to be done, she adds that at present GiftAbled has tied up with hospitals, who ask for someone who can communicate when differently-abled people needed medical assistance. She even learnt sign language herself.

She says her efforts are showing up, as a restaurant in Bangalore has recently started with a menu in Braille, a ramp and a wheel chair. She has also started two clubs one for the deaf and other for the blind to teach them skills. She also teaches skills to differently-abled people in many NGOs and has started a gift store in GiftAbled where differently abled people can sell their products.

“The journey continues,” she says.

I asked her what is that one thing, she learnt for sure in her journey. She says, “ If you are doing something good, go speak up about it to people, you never know whose life you might end up touching at the end of the day.”

As our conversation ended, she had another meeting with a differently-abled person and I knew for sure that another life was going to be changed. Truly the journey continues.