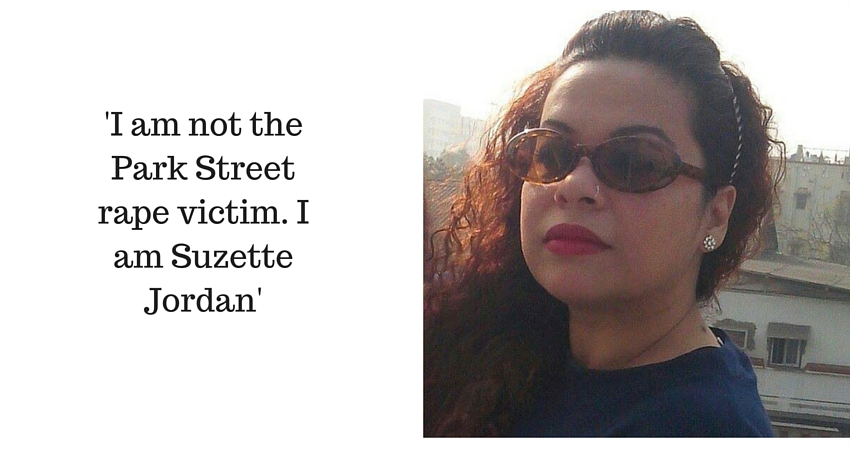 Court Finds All Accused Of The 2012 Park Street Rape Case Guilty: Suzette Jordan, May You Rest In Peace

Court finds all the accused of the Park Street Rape Case guilty. Here is the story of Suzette Jordan, who fought it all and emerged a hero.

“She is a divorced woman. May be she slutted around that her husband left her”

“Single mother. Two kids. Are you sure they are of the same father? Hahahahha! “

“What job does a woman have in a pub so late at night? “

” mothers of two kids? They go for bhajans, not for drinking “

” She was not raped. It is a fictitious story. It was actually a ‘deal’ between customer and her client that went wrong”

” She is the park Street rape victim!!Do you want to keep such cheap woman in your house?”

” I am sorry you can’t enter our restaurant, rape victims are not allowed”

This was what activist and a close friend of Suzette Jordan, Harish Iyer posted on his Facebook wall, a day before the courts were to make a judgment on the 2012, Park Street Rape Case.

It began in 2012, when Suzette Jordan, a 38-year-old woman took a lift from a man she befriended at the night club, from the extremely busy Park Street, Kolkata. There were already three men waiting in the car. She was brutally raped and assaulted in a moving car, as a fifth man too joined them. She was thrown out of the moving car, bleeding and unconscious in the early part of the morning. Her life was never the same again.

The irony here is not that, it was she who wanted to change her life, it is what the legal, political and the social system that let Suzette down. It began the day she went to the police station to file a complaint after four days of being raped. The police station sneered at her. And that was the day she heard, “It was your fault,” “What were you doing at night?” comments in the police station by the policemen. She fought through it just to file one legal complaint that she was brutally, inhumanly raped. Her ordeal had just begun.

She spoke about it to the media and that created a furore. The chief minister of Mamata Banerjee called it a ‘fabricated incident,’ trying to make the govt. look bad.

She spoke about it to the media and that created a furore. Chief minister Mamata Banerjee called it a ‘fabricated incident,’ trying to make the govt. look bad,  while Kakoli Ghosh Dastidar, MP of the ruling Trinamool Congress Party, referred that Suzette was a sex worker and her case was a deal that went wrong with her client.

The media portrayed her as a victim, hiding her identity. She was famously known as “Park Street Rape Victim” According to the Indian law, the victim and the rapists both have rights to hide their identities. Suzette remained behind a veil for more than a year. In midst of all this, her neighborhood who knew it, made it difficult for her live in her house, until she moved out. She was refused jobs and in a very infamous incident, she was denied entry into a restaurant, because of the rape incident.

Suzette fought through depression, pain and social taboos. She also had threat calls to withdraw the case. But like a hero, she stood. She revoked her right to be anonymous. She became the first woman in India, to do so and speak in public.

Agencies will not give her jobs. In an interview to Firstpost she said,“Never ever till today has anyone gotten back to me. Am I really that worthless? Because I was at a nightclub? If nightclubs are so bad then shut them down.I started taking so many anti-depressants, sleeping tablets. I had nightmares. I would wake up screaming. I was a mess. I was hurting myself. Had it not been for my parents and my babies, I definitely would have been dead.”

Suzette started working as a councilor in a helpline for victims of sexual and domestic violence, which an NGO helped her get, with a very modest salary.

Though money was always an issue, she fought through it all. She appeared in many meetings, TV shows and panels, talking about her experiences.

Though money was always an issue, she fought through it all. She appeared in many meetings, TV shows and panels, talking about her experiences. Her stand to be Suzette Jordan and not a rape victim as people branded her itself talks about her indomitable courage.

Suzette loved to dance, to laugh, to go out, to meet people and to live a full life. Though fear crippled her at times and she stopped going to nightclubs, yet, she still tried to live a normal life, raise two daughters and manage a loud laugh. People, who knew her, will swear about the joy and liveliness she brought along.

It was not an easy life, yet there she stood like a hero, trying to heal others who went through the same. Unfortunately she succumbed to meningitis this March in a hospital in Kolkata.

She waited for her rapists to be brought to justice, she fought a 3 years old long fight. A fight that questioned her integrity. A fight she had to relive the trauma of the day of her rape, in the courtrooms. Yet she fought. And yesterday she won. She must be dancing in the heaven, for this victory took almost all she had.

Suzette Jordan is a woman, who chose to live a normal life, she deserved, not the life society wanted to impose on her. She lives as an example that there is life beyond rape. Her life sharply tells this patriarchal society that it’s the rapists who should hide themselves not the survivors. For the shame is on the rapists. Each time, everywhere- In Kolkata, Delhi or anywhere, its time to shame the rapists not the survivors.

In her Facebook page Suzette Jordan, Penny Williamson writes a poem as a tribute to Suzette. A poem that will talk about the spirit of Suzette even years after the newspapers will stop talking about her.

May you rest in peace, Suzette. You are our hero!