When Did Being Rude Become The New Cool?

Being rude is the new cool. We love shows where the abuse quotient is highest and applaud meaness in everyday life. 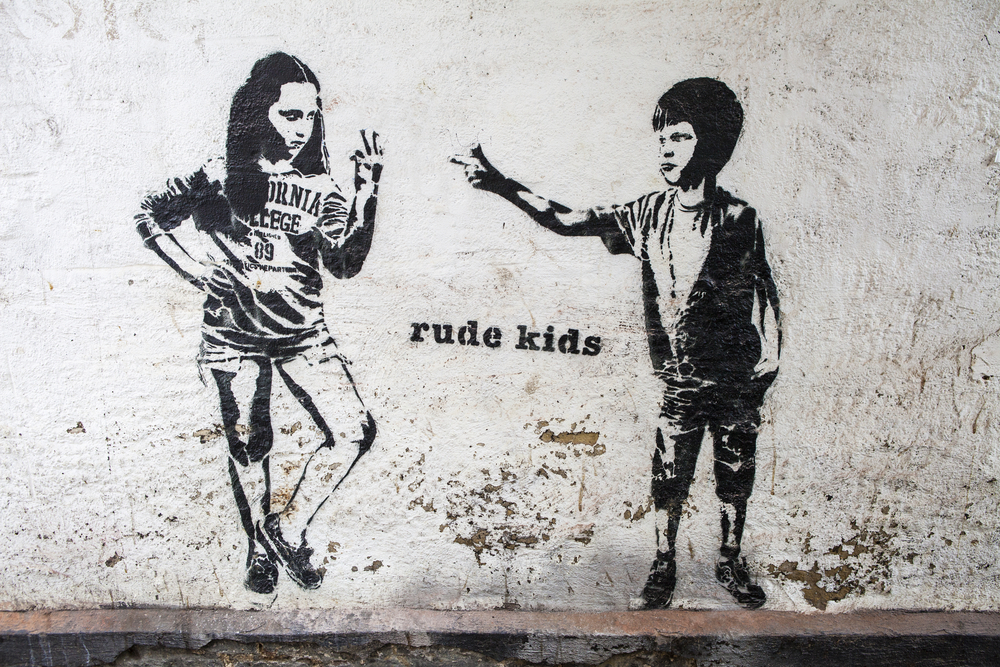 Being rude is the new cool. We love shows where the abuse quotient is highest and applaud meaness in everyday life.

It was just a day back I was visiting a neighbor to check on her as she was having an operation. As I sat through, her daughter spoke about her school bully who picked on her each day. Each day, the bully would scream, shout and humiliate her. And her classmates would hail the bully as a hero. As, I was coming out of their house, I heard a few cuss words as a few teenagers crossed the streets. They were angry at the match there team lost. Once back home, I turned on the television, where in the talk show, the host of the show was shouting his lungs out at his panelists. After a short while, I logged into social media, where people swore and cuss at people whom they have never known personally. Celebrities have even started reading out mean tweets on twitter. Anyone can come out and cuss your family, if they don’t agree with your views. Celebrities are always worst hit. Infact on twitter if you are mean, you get more followers. Shows like Big Boss and other of its clones makes us feel, how important it is to be mean. Rakhi Sawant and others made a name by being rude to others. Infact there is a new trend of being in the news by being rude to others.

We are creating a society where meanness is being celebrated as the new brave.

We are creating a society where meanness is being celebrated as the new brave. You don’t trust me, walk into an airport or a restaurant and you will see how people push and shove to get ahead of the line or raise their voices to get the order placed faster. God forbids, if something goes wrong with the order in the restaurant, the waiter has the bear the brunt. We have started letting bad behavior as a part of the protocol. There was a time, when bad behavior was condoned. Children who cussed were shown the door. There was a line between what was acceptable as a social behavior and what was not. Being polite was a mark of good upbringing and we all ran to get that title. However now, being brash, rude and mean is what brings us the power status. Being the loudest one meant the heard one. Calling someone name is termed as bravery. And of course one gets away with it.

I was travelling in this airline, “Dibrugarh to New Delhi.” This man would not push the button to call the airhostess, but shout out and keep throwing tantrums, until I stood up. He kept quite after that. Trust me this is not one of the exclusive behaviors. It happens most of the time. We have accepted that we are really cool, when we behave badly and still get away with it. Bad behavior has suddenly become the new status symbol, and we have almost accepted it.

Yes! When Honey Singh sings with his cusses and our children dance to it, no one raises an eyebrow. Look at his popularity, the man has made his mark, by throwing cusses. Look at Raghu and Ram at MTV Roadies, they made a career out of swearing and still are. Come on, we all understand what lies behind the beeps. It is said that art reflects life. Television is a good example. In shows like MTV Roadies or Spiltvilla, you got to play mean to win the game. It’s no big a deal, if you are breaking a heart or a bone, all that matters is to win, because that’s what makes us real cool. We have come to believe that being mean is to win it over others, which is why we are here for.

What about the virtues like being kind, sensitive, playing fair or service.

What about the virtues like being kind, sensitive, playing fair or service. Oh! Talking of service, don’t we treat worst the people who serve us. From the airhostess, to the customer care guy, we love to draw our power from mistreating them. Ofcourse we almost lose our cool with the customer care guy if he is 5 second late or if the delivery boy takes 5 more minutes trying to hunt our address. That’s where we draw our power. The story continues.

It wasn’t long ago, when I was an intern, my super boss (the one who owned the company) would swear his lungs out if anything went wrong. It was the employees’ worst nightmare, to be called into his cabin. However my immediate boss, whom I reported to, was kind, gentle and giving. As, I look back now, I learnt so much under him than anyone. I am not sure, if he was a rare breed, but it is always the kind, the gentle who makes a difference not the one, who beats us down. Now, I hardly remember that boss who shouted, but the one who was gentle. However in our society we are breeding the one, who is loud and mean; people who are tolerated, not celebrated. We have come to a level that it’s okay for us to become someone who is tolerated, by being dominating and bossy, without any thought to the other person.

Recently, I was watching Dr. Phil’s show, where he interviewed girls who were bullies. One of the most common form of bullying is body shaming, which is calling someone fat or ugly. When asked why she did it, she said she felt she was doing the right thing, because everyone supported her, not only in class  but when she called others names on social media, a lot of people followed her. She proudly said, she had five thousand followers on facebook. There was a program on E! Fashion Police, that was immensely popular. It was even aired in 38 countries. The whole show was less about fashion but about mean remarks on celebrity’s body parts or personal attacks. They even had designers on the studio who made the meanest remark on someone else’s cloth line. But then it had high TRPs, inspite of many who protested against it. Its next session is rumored to begin again. We can only hope the protests did some good to it. Though the show host Katty Griffin, who is now dead, never ever apologized about anything she said, inspite of repeated protests.

There is a huge difference between being a rebel and being mean.

There is a huge difference between being a rebel and being mean. Yes! Being a rebel has its coolness factor. You rebel for a cause. But rebels don’t go out and swear at other people or break bones. They have a reason to defy what they are defying. However mean people are just people, who never learnt good manners or sensitivity towards another fellow being. A mean person is to be disciplined, however we are putting them in the pedestal hailing them as cool. There is nothing cool about hurting others or pushing someone. Know, what’s really cool? Being kind, being tolerant and being a good human being is the coolest thing anyone can ever be.

The earlier we get it the better it is.

Kids today say, “I don’t give a f#@k about anyone.” I often turn back and say, “You better do, one day you will need all of them.”