Mrs FunnyBones the debut book of Twinkle Khanna will make you laugh, think and identify with her as a woman, who works, looks after her house and makes errors! 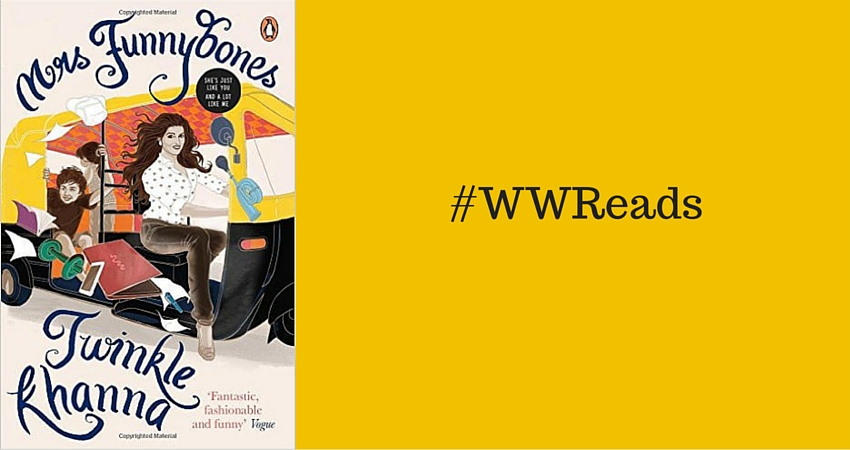 Mrs FunnyBones the debut book of Twinkle Khanna will make you laugh, think and identify with her as a woman, who works, looks after her house and makes errors!

If you are thinking that Mrs Funnybones  the debut book of Twinkle Khanna, is a look at the insides of the glamour world, then you got it totally wrong. Just from the first page onwards she makes sure the reader knows that it’s about a woman like you and me. You won’t find a star hidden anywhere.

If you have read her already published blogs, you will find them here too and others that are freshly written. Though born to superstars parents and married to one, she shows no starry sides to her life. She herself declares that she could never act, and moved from the life of an actress in Bollywood long back, and when she says that you believe her.

She takes us through her life. Her morning updates of her son’s school’s whatsapp group to cleaning her daughter, who decides to throw over her. The more you read her, the more you will know, she is so much like us. An urban woman, who works, looks after her house, brings up her kids, deals with her mother in law and her moody clients with equal élan.

She gives a feel that you are talking to an old friend over a cup of tea, post midnight and can’t stop laughing.

She writes flawlessly, using wit and humor as her weapons. She gives a feel that you are talking to an old friend over a cup of tea, post midnight and can’t stop laughing, you know that friend who cracks all jokes with a straight face. That what Twinkle Khanna does through all her pieces.

It’s like a funny bus ride where she takes you through her everyday life- from her male friends who happily stayed single to her house help, who makes sure something goes wrong each time, something is assigned to him. She invariably calls her husband ‘Man of the house,’ and her son, ‘The Prodigal Son,’ making fun of so many things which we often fail to notice. Like in the post, ‘Love is imperfectly perfect,’ she comically tell how her son falls ill, but how her husband ends up taking care of him.

She very swiftly writes about serious things from sanitary napkin to being arrested, but makes sure they look humorous without trying to be philosophical.

Once the book is over, you will feel, as if you knew Mrs Funnybones forever!

In one sentence, ‘Go for this book, you won’t regret the smiles, it will offer.’

If you still need more reasons to read this book, go through these funny lines from Mrs. Funnybones.

On being called Twinkle

Naming me Twinkle was a foolproof way of making sure that I would get teased throughout my life, have immigration officers at various airports stare at my passport and shake with hysterical laughter and strangers stalk me with WhatsApp messages like, ‘Twinkle, Twinkle, little star, I hope you get hit by a car!’

On her domestic help

I am at my neighbour’s for tea when my domestic wonder calls me to say that some gentleman has entered the house and is asking for my passport and wants to know where my computer is as well. Rather worried, I ask my desi Jeeves if he recognizes this man, to which he replies, ‘Didi, I don’t think so. Looks villain type of person, come fast.’ I frantically rush home only to discover that
A: The gentleman in question is Mansukh bhai, my Internet fellow.
B: He has been asking for my laptop password, and not my passport.

If you’d like to Mrs. Funnybones by Twinkle Khanna, do consider using our affiliate links at Flipkart or at Amazon.