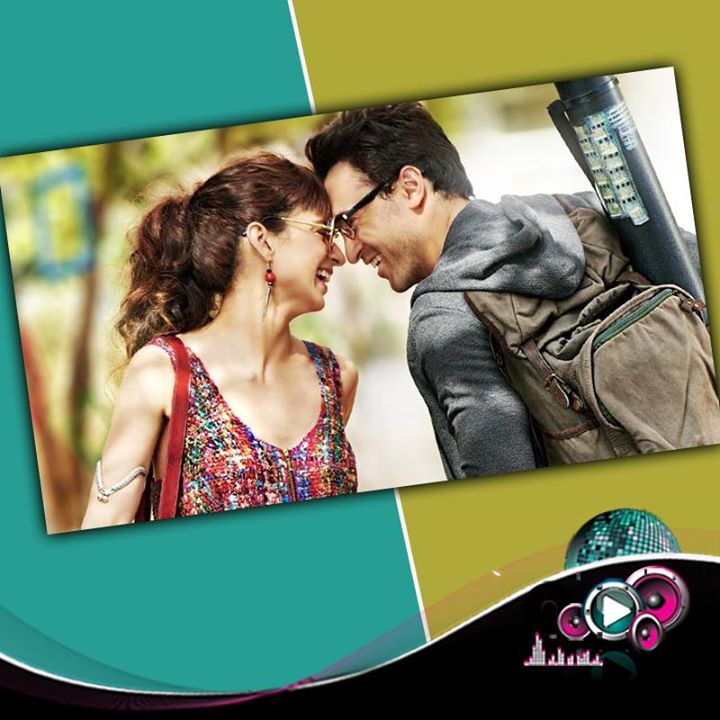 It’s fun to watch a movie with your cousins. Isn’t it? Specially when you have met after long. So, I thought. We went to see Katti Batti. We thought some romance on the screen will lit up our day.

So, we all sat down, to watch the movie. It felt good when Kangana a.k.a Payal says, “I’m not in this for a serious relationship, are you cool with just time pass?” I thought that here is a girl, who gets into a live-in relationship, without Shaadi (I know, how some of us will cringe at it) and exactly knows what she wants from it. No chest beating for ‘Ek Chutki Sindoor.’ I adjusted my rose-tinted glasses. I thought that here is a coming of age movie.

But then, we went back to the 80s. (Some spoilers coming up.) Imran aka Maddy stalks her after she walks out of the relationship. And Payal is portrayed as the bitch, until we realise that she suffers from cancer and did not want him to take on her burden. Here is where it let us down. It lets us all down.

There is one thing we never get. Like, we never do. When a woman says a no, it means a no. Stalking her is not okay. It never is.

The movie shows how his family and friends encourage him. But can’t we really get it, that stalking is not normal behavior?

The movie shows how his family and friends encourage him. But can’t we really get it, that stalking is not normal behavior? It’s creepy. You never encourage it. But then, did Bollywood ever get it right? But why blame Bollywood, doesn’t art imitate life? And vice versa.

It suddenly took me to when I was just 13 or 14 years old.-my first experience of being stalked, each day. It so happened that we had to cycle to a nearby town for our Maths and Science tuitions. We were in the 9th standard. Those were pre-internet and mobile days. We would go around 3:30 pm and be back around 5:30 to 6 pm. Please note that by 5 pm, dusk falls all over Assam. So every day when we used to cycle back, a group of 5 to 6 boys would follow us in a brown Fiat car.

The thing is that, while cycling back we had to cross a tea garden. That stretch was always lonely and dark. So, that’s where the boys waited and followed us, each day. Now, at 13/14 what do you do? You already have a story in your mind. And you act on auto pilot. So, what did we learn in our small town? This is what.

I remember, when I was in 5th standard, my best friend and I watched Phool aur Kaante on Doordarshan, one of those Saturdays Doordarshan showed new movies. I was on a sleepover at her place. We both saw how Ajay Devgan would go after Madhu (the heroine) and then sing after her. Finally they become a couple. It was a hot summer afternoon in our small town, as we lay on our backs wearing our soft cotton frocks. Now that I look back, I realize how two little girls, learnt that this is how love is. First lesson learned: Men will chase you.

So, when we got stalked in standard 9th, we decided that it was normal. It was confusing that we had fear in our hearts too.

So, when we got stalked in standard 9th, we decided that it was normal. It was confusing that we had fear in our hearts too. But we had already decided that was normal. That was the first wrong lesson young girls learn that if they like you, men will harass you, and it’s okay. As those were pre-mobile days, blank calls became an integral part of our lives. The stalkers (I am not sure, if was the same guys in the brown Fiat car) would stalk each of my movement. I lived with my Mom and my brother, who was in school then. So, every time, I stepped in to home, the call would come. No, no one would speak, just whispers, that the person loves me. My heart would beat faster if the phone rang after 8 pm. The stalker would wish me goodnight. Until we got the button phone and I would just go and put the phone on silence. Though I tried hard to study, I knew the phone was ringing.

Even before my boards, when I stayed home to study, the moment Mom and my brother would leave home, the phone would ring and in whispers someone would wish me a good day. I told my Mom but we had no other way to stop it. So, I learnt to make my voice hoarse to sound like a boy each time I picked up the phone. But still I told the often repeated story to myself, that this was normal. When a girl grows up, this happens. Did Shahrukh Khan not have our compassion in Darr? Oh! The way he showed his love. We saw him in Deewana,the way he chased Divya Bharti, and barged into her house to play Holi. That was love, we thought.

Do, you know what stalking actually does to a girl? First it confuses her because love is supposed to feel good, as it is shown in movies, but here it terrifies her. But then, what do you do with it? At 13, I had not heard people around me discuss it. People discuss girls, but not relationships. So, I trying to be the good girl (one not to be discussed) learned one technique: To avoid it as far as possible.

This is what me and my girlfriend figured out. Taking longer routes home. Avoiding boys. Not trusting boys. And going only in all girls group. We decided that boys meant trouble. The further the better.

The stalking did not end there. Then came the bike phase. Around 11 at night, there would be a group of boys, zooming just outside our home. Our house had no man; only Maa, Bhai and I stayed there, so we were troubled. Even when my sisters came from the hostel for a break, the troubles continued. There were even times someone would throw a stone on our roof.

Once my best friend and I and my best friend, told her cousin about the brown Fiat guys stalking us. She told us that it happened because we talked and laughed too much. So, somewhere we also made it all about ourselves.

Fear is a learned response and you end up living with it and you function under it.

Stalking made me fearful, it instilled some kind of shame within me and somewhere I hated anything feminine.

Stalking made me fearful, it instilled some kind of shame within me and somewhere I hated anything feminine. Because feminine meant inviting trouble. It made my self-confidence take a dip. I stopped loving myself, because somewhere I believed that story that I invited unwarranted trouble.

In school or in the society around us, no one really counseled or even really talked about it – as if it was unimportant. It happened to me in Delhi too. It was a guy I met at the poetry club and had dinner twice with 15 other people; when he stalked me, I still did not report it. I still felt silence was the way out.

It took me years of education, years of support and hearing so many other women speaking up that today I know that it is a criminal offence to chase a woman who does not want to connect with you.

I have had abuse on the virtual space too, but the block button worked fine.

Can we get this clear? A No means a No. That means, stay away.

Can we get this clear? A No means a No. That means, stay away. A woman is capable enough to choose and what and why she chooses is none of your bloody business. If she wants you, she will tell you. If you believe that, ‘Uski na main haan hai,’ (In her No lies her Yes) you are wrong.

I learned to keep away from guys for a real long time, until I realized love meant consent, feeling confident and being an equal. You don’t suffer in love, you blossom, and you become better. You don’t fear,  you share. Later when I met men who did not chase or bully me even when I refused their proposals, I learned about relationships. But to come to this, it took me a long way.

This is why we need women on the screen who report to the police when they are harassed; who do not smile and get back with that guy once again. Many young girls are watching.

As Katti Batti ended, I walked out of the cinema hall. I saw smiling young boys and girls walking out. My heart sank. I could stand there and see myself as a teenager, cycling back home. The thought left a bitter taste in my mouth, even after so many years.

I still hate Fiat cars and the colour brown.

Because Age Is No Bar To Chase Your Dreams!