Ima Market in Manipur, is probably the only market in the world that is run by all women; a place where equality is preached and practiced. 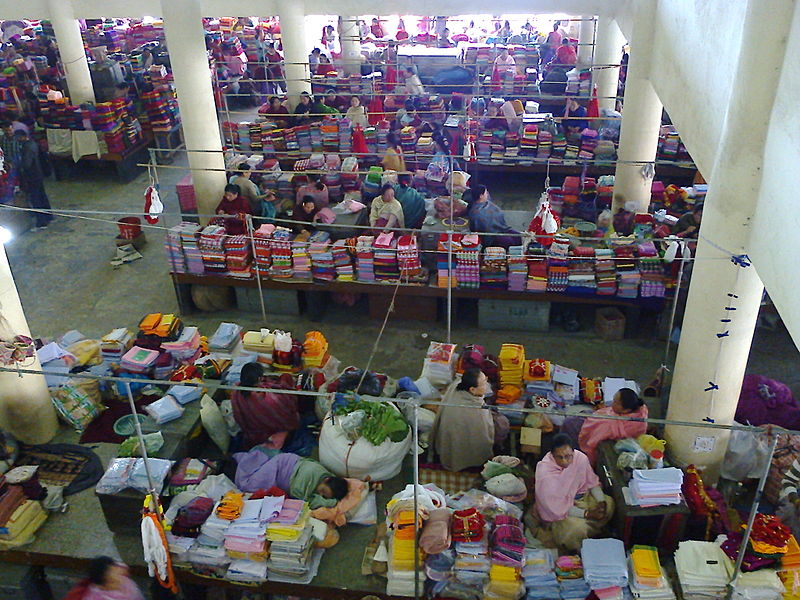 Ima Market in Manipur, is probably the only market in the world that is run by all women; a place where equality is preached and practiced.

In a nation where Patriarchy has ruled and thrived over centuries, there are women who have stood tall on their own. If anyone ever travels Northeast of India, there lies Manipur in the furthest corner. If you enter Imphal, its capital, you will see a different smell and taste a different sight. Yes! I am talking about Khwairamband Bazar in Imphal, the world’s only all-women run market place.

Markets are the pulse of a society. It is where the commoner walk, make a bargain or make a living. When a woman can walk equally with a man and can make the same bargain and living, the message is loud and clear; that you are walking in an equal society. A society the rest of the nation is fighting to be.

This small state has seen insurgency and violence which has resulted in its military presence. It seems like a paradox that this beautiful state that is blessed by nature with breathtaking landscape, wildlife and islands that seemed to be carved from the sky itself, has seen bloodshed and strife. It is so weaved with beauty that it is aptly called, ‘the Switzerland of India.’ Nagaland borders it from the north, Mizoram in the south and Assam in its west. It shares the common international border with Burma in the east.

Manipuris were celebrated warriors. Throughout history, they are known to maintain independence from the surrounding tribes.

Manipuris were celebrated warriors. Throughout history they are known to maintain independence from the surrounding tribes. It was only in 1891; the Britishers could finally defeat and subdue them. It is not only there men who knew to fight and win, the Manipuri society has given rise to powerful women who fought and revolted against the monopolistic traders. And there legacy of revolt shines today as “Khwairamband Bazar.”

Khwairamband Bazar is also known as Ima Keithel. In Manipuri Ima means mother and Keithel means market. So it is known as the mother’s market. There are 4000 strong shopkeepers who are all women. This unit of women represents the strong foothold of women in the Manipuri society. They stand as glorying example of an equal society. Any women irrespective of her background, religion or community can set a store here.  A world that is so intolerant should stand up and take a note from these Imas.

Interestingly if you walk down the corridors of the market during the lunch hours or breaks you can find these women talking over socio-political issues. What a refreshing change from the saans- bahu gossips we are fed by the main stream media every day over and over on our television sets. Is Ekta  Kapoor listening? These Imas are not only businesswomen but are empowered and knowledgeable about the world around. In a report published in 2005 by the Centre for Organization Research and Education (CORE) Manipur, it says, “these Keithel is not just hubs of commerce, but also of information exchange and socio-political processes.”  If we go a little back in history we find that the Nupi Lan or the women’s uprising in Manipur was organized in the markets against the British Raj in 1905.

These Imas dressed in Phaneks which resembles a sarong and Innaphis which is like a scarf go about their everyday business each day with their forehead marked with sandalwood.

These Imas dressed in Phaneks which resembles a sarong and Innaphis which is like a scarf go about their everyday business each day with their forehead marked with sandalwood. Most of the items found in the market are locally made. But do not make a mistake, you can find everything you want or need. If at one corner you find vegetable or meat, may be on the opposite corner a lady knits a woolen muffler. From household utensils to jewellery, this market covers every essential product that is needed in day to day life. However, the main attraction always remains there handicrafts and the Manipuri dresses sold by the ladies. Haggling does not seem a too good idea. Twenty percent cut on the first price is the most one can get.

It is very difficult to trace down its days of beginning. The Gazetteer of Manipur 1786, shows that the markets then at Manipur were run by women in open air spaces ,especially in the morning. But it was not easy, the Imas also had a bad time when in 1948-52, it was proposed that the existing shed should be demolished. It was done in accordance with some local business person who had vested interest in the market. But the women never gave up. And their legacy of courage stands as the thriving market today.

Mostly older ladies and grandmothers come down to the market to trade; young mothers are left at home to tend to their children.

As, time passed by, the market also changed it face. Today the shops are no more in the open shed, they are been shifted to three newly constructed government buildings.

As, time passed by, the market also changed it face. Today the shops are no more in the open shed, they are been shifted to three newly constructed government buildings: Ima Market, Laxmi Bazar and the Linthoinganbi Bazar. Backed by the Imphal Municipality Corporation these newly housed shops have power back-up facilities, banks, food stalls and drinking water. The shift was celebrated with traditional rituals and a religious procession.

After seeing these women, it comes as no surprise that five times World Champion and Olympic medalist Mary Kom is one of them. Not only is her, the women’s group, Meira Paibi or Women Torch-bearers that have effectively worked against human right violations, alcohol and drug addiction a part of the Manipuri society. The Times of India awarded this organization the ‘Social Impact Lifetime Contribution Award ‘in 2012.

If we take a bird view on the geography of Manipur, we would see that it is shaped as an amphitheatre. True to its shape, these women have outperformed so many others that they deserve the stage any day. In a nation where we are still thinking and contemplating women’s safety, the woman in this state, which is tucked away amidst the hills, has shown exemplary strength and courage to lead the life they do. Each is a hero. Each is an example. The world can only watch them, learn from them and stand up in honor of women who stood tall in a nation of patriarchs.