Are We Born With An Inner Maternal Instinct?

Is motherhood all about the inner maternal instincts or a process which a mother learns throughout her journey? A mother tries to find out.

Two and a half years into my motherhood journey and I’m still not sure I have an answer to this!

While I am absolutely not debating the fact that we have our basic instincts at place that help us keep our children fed, protected, bathed and loved at all times, I sometimes wonder in this complex 21st century world that we live in, are we any better than the mommies from the primal world who had a basic understanding of motherhood but did not have the challenges facing playground rules and debateable ethics!

We stay in a country that places motherhood on the highest pedestal ever. Mothers are supposed to be nothing short of Goddesses, who while taking care of the needs of their child(ren), also need to be domestic experts, workaholics, all while taking time to make sure they are looking their best at any given time of the day or night.

As expectant mothers, we are rarely given any opportunity to prepare ourselves for our new role in life, let alone ‘adjusting’ when the baby is actually born.

As expectant mothers, we are rarely given any opportunity to prepare ourselves for our new role in life, let alone ‘adjusting’ when the baby is actually born. We are expected to know it all, the age old mothering ‘instinct’ is supposed to kick in as soon as the little pink bundle of joy is placed in our arms after hours of excruciating labour in some cases and a major surgery in other cases! It is my grouse that we are given a painfully short window of time to suddenly adjust to the responsibility of another human being so totally dependent on us and being totally ok with it or else face the frowns of everyone around and taunts of “what kind of mother is she!”

Most lucky women have the best role model ever present in their life to understand the basics- their own mothers. Mothers in general give us the most loved childhood, through infinite tender love and care, and pass onto us the female perspective of life and parenting. This fact assumes so much more importance when we ourselves become mothers.

This has also been one big realization to me as when I birthed my twin boys, I understood how having a mom who was always available to me, showed me unconditional love and helped me understand my own emotions, and taught me that life is not all a bed of roses, truly affected my own mothering abilities. I realized then how blessed I was that at least some semblance of this “maternal instinct” was ingrained in me through my mother.

Even then, I did not consider myself fully prepared to be a mother, although I never vented out these fears to anyone, not even my husband. I always assumed, like in the movies, my inner mother would kick in as soon as I felt my baby’s skin or held him for the first time. I thought “I am a woman” and by that right alone would have the blessed “maternal instinct”.

It did, to a certain extent, ‘kick in’. I was very lucky to walk out of the hospital two days after the birth of my boys in almost no pain to immediately being the bonding process with my baby boys as I immediately understood that it was only me who would be able to give them the love and affection they needed to thrive.

I slowly realized that the love for my boys just kept on growing day after day with every single microscopic cell of my body.

I slowly realized that the love for my boys just kept on growing day after day with every single microscopic cell of my body. I looked at them and felt in awe of the universe, God, the power of life and the fact that I had given birth to them all while appreciating and understanding what had driven my mom for the 30 years of my existence, given the way I was feeling after only a few days of their existence.

While grasping the concepts of breastfeeding, nappy changing, bath times and sleepless nights, I also began to understand the immense challenge of motherhood, albeit reluctantly. I also understood that my presence was imperative, and I needed to be present not just physically but mentally also 24/7 to ensure that all the pieces of motherhood and this journey fell together cohesively.

Had my maternal instinct kicked in yet? I don’t know. I know that I was as excited and as terrified as a toddler learning a new skill. Every day was a new day, every minute an experiment towards the long journey of ‘looking and behaving like a mother.’

I think what finally sealed the deal was around the boys first birthday, when they started calling me ‘Mumma.’ That did it. In more ways than one, it told me that I had arrived. My bewildered steps were now replaced with confident actions, as I finally found the strength to embrace my natural instinct and give the same mothering to my kids that my mom had given me over so many years.

It confirmed to me that I was not a mess and that I had been doing it right all along.

It validated the fact that even if you feel you are not born with the mothering instinct; you will stumble upon it sooner or later in your motherhood journey. Like I did!

Dear Mommies out there, how did you grasp the concept of motherhood and channel your inner mommy instinct, if you had it? Did you discover yourself how to be a mother or was it taught to you through life’s experiences? 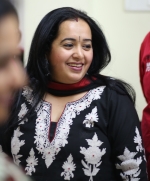 Doting mommy to fraternal twin toddler boys, in my earlier avatar I was an Architect,

Oh My Maternal Instincts, Where Art Thou?

We Want The Maid’s Labour But Not Her ‘Infected Hands’, Says A New Ad