Mangalyaan & More: 4 Contemporary Indian Women Scientists You Should Know About 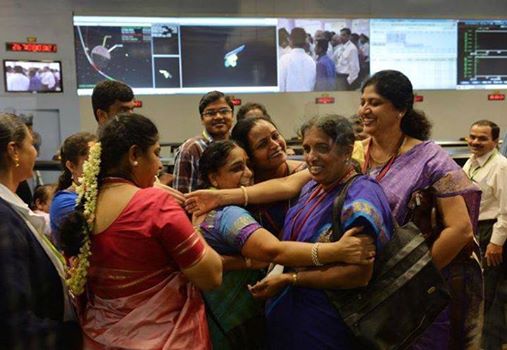 A career in Science is full challenges, and especially so for Indian women due to social conditioning, social stereotypes (PDF), the double burden of home and laboratory and a lack of mentors.

In spite of being an uphill journey, a career in Science is a fulfilling one – this is the mantra of many Indian women who have made it to the top in the world of Sciences.

With India on a high post Mangalyaan, let us peep into the works and lives of some Indian (and Indian origin) women scientists at different stages of their career today for inspiration.

A professor at the Centre for High Energy Physics, Indian Institute of Sciences, Bangalore, Rohini Godbole is also one of the editors of the book Lilawati’s Daughters (a pioneer in collating the works and lives of almost 100 Indian women scientists).

She believes that even today, young girls need to be encouraged to consider a life in Sciences; she has therefore c0-edited another book called The Girls Guide To A Life In Science.

Rohini Godbole has created a niche for herself in High Energy Physics. Her prediction along with a German colleague called the Drees-Godbole Effect was proved experimentally at the Large Hadron Collider and CERN in Geneva.

She believes in passion and perseverance and accepts that a success in science requires tough choices to make. She was not taught Science until class 8 because hers was a girls’ school. She started studying Science to prepare for the State merit scholarship exam on her own and won. This led to the school’s maths teacher teaching her mathematics.

Since then, Rohini Godbole has cracked many scholarship programs, gone abroad for a PhD in particle physics and blazed her way through a career in Science. She is also one of the panel members for Women in Sciences in India and believes in reaching out to unlock the potential talent pool of women in Sciences.

Tessy Thomas was recently nominated as one of the two women on the IIT Council (the other female scientist being Vijayalakshmi Ravindranath). This is the first time women have been nominated to this usually all boys club.

Tessy Thomas was recently nominated as one of the two women on the IIT Council (the other female scientist being Vijayalakshmi Ravindranath). This is the first time women have been nominated to this usually all boys club.

For Tessy Thomas, this is not the first time she has broken a glass ceiling in the scientific world. She is called ‘Agniputri’ and is literally a rocket scientist. She is the first woman Project Director for many missile projects in the Indian Defence Research and Development Organisation (DRDO) and is based out of Hyderabad.

She was the mastermind behind designing guidance for all the Agni series, Agni III, Agni IV, and Agni V missile projects – the strongest weapons of Indian defence. It was the former President of India, APJ Abdul Kalam as her Director, who placed her in the Missile project.

Under her supervision, the number of women scientists working on the Agni team has increased sharply. Tessy Thomas believes that science does not have any gender, that it is the knowledge base and ability to work that matters and that women with persistence and passion can break the glass ceiling.

Sunetra Gupta: The Science of Diseases

In her own words, Sunetra Gupta is a Scientist (Professor in Theoretical Epidemiology, University of Oxford) and a Novelist in parallel. She fell in love with mathematical equations and the poems of Keats simultaneously. She believes that both are tools to explore the worlds around and within ourselves.

She believes that both (mathematics and poetry) are tools to explore the worlds around and within ourselves.

Her childhood, spent in Kolkata as well as in Ethiopia, was much influenced by her father, a historian and enthusiast of the great poet Tagore. Like in any other Bengali household, Tagore was an integral part of her growing up.

She started writing science fiction and has translated Tagore’s poetry. She went on to study Physics at the University of Princeton in the US, on a scholarship. But soon, she became interested in how mathematics can be used to understand biology, which led her to learn about the evolution of infectious disease agents responsible for malaria, HIV, influenza and bacterial meningitis.

She is enthusiastic about developing models of how infectious agents are always evolving to do the tough job of infecting others. She has also written a number of published novels.

Sunetra Gupta has been awarded the Scientific Medal by the Zoological Society of London and the Royal Society Rosalind Franklin Award for her scientific research as well as the Sahitya Akademi Award, and the Southern Arts Literature Prize. Her novels have been shortlisted for the Crossword Award, and longlisted for the Orange Prize.

The youngest of the four scientists profiled here, Roma Agarwal is no laggard when it comes to potential.

An associate structural engineer at the WSP group, she has worked at ‘The Shard’ in London and considers this her career highlight. She worked there for 6 years and helped design one of the world’s most recognisable buildings. While working here she also overcame her fear of heights and now does not mind going up to the highest level of the building!

Roma Agarwal transitioned from Mumbai to London as a child. A science and maths whiz kid, she loved playing with Lego. She was encouraged by her teachers to learn physics at the University of Oxford, where she found Structural Engineering a field to merge her two interests – designing and science.

Her work at The Shard also connected her to other related topics like diversity in science and women in science. Roma believes in the need for smart cities in a world with a growing population.

She also believes that inspiring young people to join Engineering and Sciences free of all the so-called stereotypes needs the support of parents, schools, universities, industry and government. She is working towards this dream by reaching out to schools and universities and promoting engineering to young people.

Her dream is to experience a “truly diverse workforce where all the stereotypes have fallen”.

Technologically driven solutions are important to meet the demands of the huge population of India within the limits of her resources. Science, technology, engineering and medicine (STEM) provide stimulating and appropriately paid career paths.

More women in India need to be encouraged to enter STEM careers. Women scientists like those profiled here show us all that it is definitely possible.

Disclaimer: This article is based on the information available online about these scientists, not on personal interviews.

Pic credit: This top image of scientists celebrating at ISRO post the successful Mangalyaan launch went viral recently, and is used here for that reason – it showed the delight many readers took in knowing that a sizeable number of women were part of the launch. The image belongs to AFP.