The Living Goddess is a well-researched exploration of the long existing Kumari or living goddess tradition in Nepal, centered on the worship of a young girl. The Living Goddess is a well-researched exploration of the long existing Kumari or living goddess tradition in Nepal, centered on the worship of a young girl.

Woven around the mountains of Nepal, The Living Goddess by Isabella Tree is a vividly told tale of mystery, myth, history and tradition, around the Kumari tradition. The book begins with Tree’s days as a teenaged back-packer in Kathmandu and her chance glimpse of the living Goddess.

Through meticulous research over the decades and frequent travels, The Living Goddess talks about the mystery behind the tradition of worshipping a young girl who is believed to be the possessor of the divine Goddess within her. The girl is chosen by the priests on a precise standard of perfection. For an average onlooker, it might just enthrall one with all the tradition and rituals that goes with it.

However, Tree has scathed the surface and peeled the layers around the mystery that shrouds it. Through her book, she questions the afterlife of a Kumari, once she is uninstalled as one, just before she attains puberty.

Tree takes the readers through the tradition, the sacrifices and the belief that creates this whole tradition. What will strike a reader is the insane amount of cattle sacrifice that goes on to satisfy the Goddess. To my mind, it left a question, “Does the Goddess need this obscene amount of blood sacrifice to be satisfied?”

She then weaves the facts along with myths and takes the reader through the political instability of Nepal. Through her narrative she wonders why a Hindu monarch bows to a Buddhist girl (the Kumari is chosen from the Shakya or Bajracharya clan of the Nepalese Newari community) and are the initial rituals as macabre as rumored to be?

To go deeper into the tradition she very painstakingly interviews a few ex- Kumaris, of which the interview with Rashmila Shakya is noteworthy. Her parents declare that the moment Rashmila as a Goddess wore the Naga-Mala, she felt different –  she felt like a Goddess. Tree talks about the difficult transition of a once worshipped Goddess to a mortal who has to join school and live an ordinary life. The most defining part of this book is the women – the kumaris, their mothers, grandmothers, aunts, sisters and caretakers.

She very poignantly talks of the history of Nepal and its association with the tradition. As she narrates, “The sense of history is all-pervasive in Nepal. But it is not history in the western sense — it’s the stuff of myth and legend. The stories of the kings of Nepal and all the great characters of the past, even if only a couple of centuries ago, are interwoven with the machinations of gods and goddesses, sages and bodhisattvas. It’s a very rich, multi-layered way of seeing the world. The Newars — the indigenous people of the Valley — see myth as a living thing, illuminating the events of the present. So when shocking things happen, like the royal family massacre, it is often seen in the context of myth coming to fruition.”

It’s strange that even after the massacre of the royal family, the people attributed it to the wrath of the Goddesses and the karmic ties. Everything in the valley seems to be tied down to the myths and legends.

Though things are changing, yet the roots and faith in the past still stays on, as the Kumari Puja still continues in spite of protest against it from several quarters as child abuse. Though in places the book feels like a history book, the research and interpretation is very impressive. It takes a story teller of a very high caliber to stitch every bit of information of the past and present together and put forward a story that is impeccably told.

The Living Goddess is a highly recommended read for anyone, who wants to dwell in the web where Gods, history, politics and belief come together.

If you’d like to pick up The Living Goddess by Isabella Tree, do consider using our affiliate links at Flipkart or Amazon India. 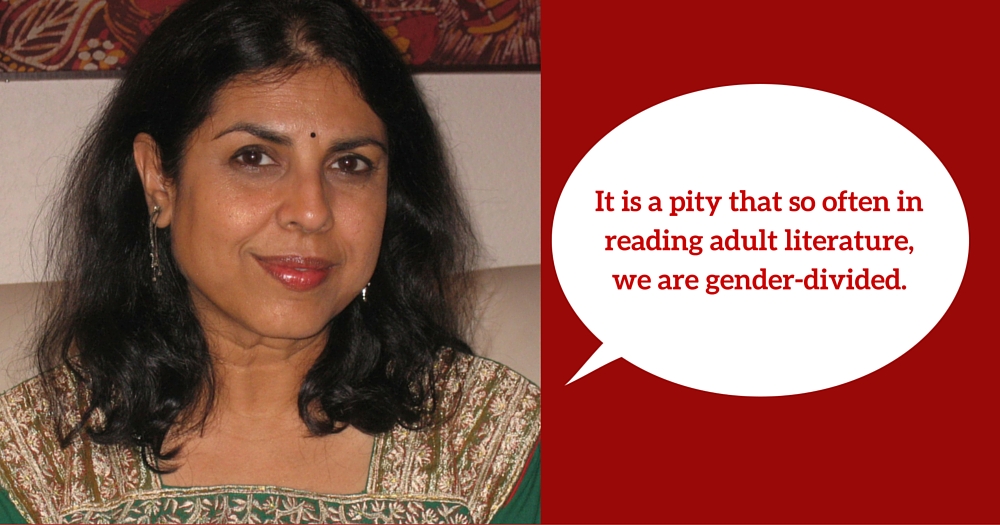 Question: Your work has been published in over 50 magazines, over 50 anthologies, and you have written several award winning books. I am a huge fan, having fallen in love with Mistress of Spices, oh so many years ago! Since then, I have devoured all your books, hungrily buying them the moment I chanced upon them in Midland Bookshop, a small but well stocked bookshop in Delhi’s Aurobindo Place Market.

While researching your work for this interview, I came across the fact that you started your career as a poet. Tell me a little about that journey, your foray into poetry, and then into the world of romance and fiction.

We are always talking about gender discrimination, but I wonder if any bench of Supreme Court can deal with discrimination within the same gender – it is amazing that in the 21st century we talk about women being auspicious and inauspicious; how can any woman, or for that matter any human be inauspicious?

Our society gives special privileges to a married woman. From my childhood I have seen married women getting preference in most of the festivals. They are called ‘suhagan’, ‘saubhayawati’ and similar other names. They are considered to have ‘good fortune’ and are ‘auspicious’. Nothing wrong with calling somebody auspicious. But I definitely have issues where married woman are considered auspicious in comparison to women who have lost their husbands. Some even go to the extent of debarring women who are divorced to be a part of any sacred ceremony. And some even consider childless women, inauspicious.