PMS In Boys And Why It’s Not Funny!

How is it that men know so little about menstruation but so much about PMS?! 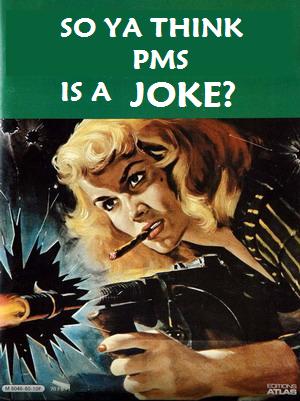 “Are you undergoing PMS?” asked my friend during our one-hour long telephonic conversation, as I wondered why in any heated argument people always wonder whether I am on the Monthly Hormonal Rock and Roll or not. Bah! Seriously?

With more than twelve years since I got my first period, I have gone through my series of cramps, irritation and cursing of womanhood for this monthly menace. Looking for answers on the internet, asking my agony aunts and still having found no solution, I officially declared myself as a person who suffers from PMS twice in a month, with  both the Pre and the Post Menstrual Syndrome. It doesn’t make sense right? To me, however, it does. I bloat, gain 2 kilograms of weight every month, begin sprouting acne and feel sleepy all the time – all of which makes me feel both sulky and irritated.

As a teenager, I used to question God many a time on why a woman’s body had to undergo this monthly affair, and having said that, I know the it’s-beautiful, God-made-us-this-way pattern of thinking, but let’s accept this: we go through it and nobody can understand what happens to us since every woman has a different PMS system. No matter how open minded you are, you can’t openly crib about it. From school to college to office, I hopped silently on one bandwagon to another with my share of highs-and-lows woes.

I am not going to start discussing every PMS syndrome solution in detail. I dislike the fact that the hormonal roller coaster is considered as a reason for any strong point of view against women which people around sometimes find hard to digest. I remember a male friend of mine exclaiming to a colleague after a heated argument saying, “Oh, I think it’s that time of the month!”

I mean yes, one of the symptoms of PMS is being cranky but generalizing it for your own benefit, is going a little too far. There is a lack of clarity and awareness we see around in men (and women too) with respect to issues surrounding periods. While everyone knows there is a PMS system, very few are aware that it varies from one woman to another. Similarly, the lack of information amongst partners, friends and colleagues, results in women and their opinions being seen without any logic at times, and this is rather disheartening.

While it is important to make women aware of how to handle menstrual woes, it is equally important for boys (who later become men) to be educated about the importance of understanding the phenomenon. Taking it as a joke won’t help.  While a girl gets to know about puberty, menstruation and sex, it is important that young boys/men are sensitized about this process. It is important to emphasize sensitivity above awareness in this regard.

My opinion on my PMS system has changed over the years as I have made a transition from going out of control to now knowing how to balance my moods, health and cravings. But the overly comical way in which men around me consider PMS makes my blood boil. We have a vagina, you don’t – so don’t voice opinions about it, unless you know what we go through. In fact, in the same manner that many men around me term PMS, I once came out with a PMS term just for men. Though it doesn’t really make sense, the way men so confidently describe women’s actions every time everywhere makes me realize how the Permanent Masculinity Syndrome (PMS) in each and every man (offering opinions about feminine issues like this) makes them form an opinion about us, without knowing the reality behind the same.

This PMS (of males) comes from our sociological conditioning and upbringing which has been taking place for years. Our families, societal patterns of functioning, poor communication and interactions between men and women have resulted in a variety of men we see around us, most of whom are least sensitive about the normalcy and relation of menstruation with issues like sex life, family planning and the health of a woman. While earlier, men were either totally unaware about PMS and menstruation, those who knew of it thought of it as a totally female-related problem that they had to deal with. The Result: a brigade of men around who know, yet ignore and fail to understand the dynamics of menstruation. Little knowledge after all is worse than having no knowledge and is no different from the times of our fathers and grandfathers. They knew either nothing or little and silently shunned the topic beneath the carpet.

The present-day males are arguably different. The media exposure what with sanitary napkin advertisements, information (incomplete and incorrect at times) on the internet and in books have made men curious, yet totally unaware with little or poor knowledge about the subject. While educating a girl is now being discussed, it is time that this education on bodily changes, hormones, puberty and menstruation takes place for boys too. Youngsters need to be informed and sensitized together about it. Not in separate rooms, not by moms for girls and dads for boys. Sensitizing on menstruation and PMS is crucial for transforming boys into informed men so that it doesn’t become a joke, like it is right now.

So what was my reason for writing this?  Simple – to ask everyone to speak up! Create structures in homes where a sensitive dialogue can take place between generations, where questions can be answered with ease about major changes- bodily, hormonal and psychological. The reason a man jokes about a woman and her PMS is because (a) he knows little or nothing about it and/or (b) he thinks that it is a fun thing, isn’t sensitive to the whole process and as a result of that, maturity cannot be seen, let alone expected.

If we want better relations between partners, better family planning and breaking of gender barriers to take place, information and the way it is imparted is the key. Buying a sanitary pad for a woman should not be a shame-factor for a male. Giving one’s girlfriend/wife/sister a hot bottle of water to relax her strained tummy tissues should happen without any hitch. PMS for females can be handled well, if men swallow down their PMS concepts and redefine it where masculinity becomes not muscle power but supportive sensitive structures in the social complex. Better relations and understanding? Less inquisitive brains? Less experimentation? Think about it. All of them are interrelated.

This article was originally published at Menstrupedia