Safety for women in public, starts with respect for women at home - the attitudes are very much linked to each other 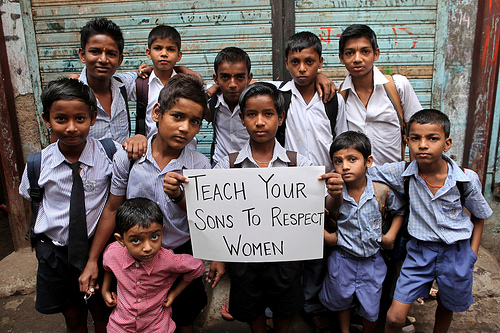 New Year 2014 began for me with a news item in many newspapers saying that a 16-year-old girl, who was gang raped twice in a day around two months ago at Madhyamgram in West Bengal and had attempted suicide by setting herself on fire on December 23, succumbed to her injuries at a hospital here on 31st December 2013.

A gang of men had raped the girl on October 25 near her house. Later, the same day, when she was returning home along with her father and mother after lodging a complaint with the local police station, she was again abducted by the same gang and raped.

The chilling memories of the Nirbhaya rape in Delhi came back to mind, along with the memories of tall promises by the government, and of the Rs. 1000 crore Nirbhaya Fund set up by the Government of India. The Fund, sadly, remains unutilized to this day, so much so that the Delhi High Court, while hearing a PIL on the issue asked the Government how the victim compensation component of Rs. 15 crore of this Fund was being utilized, if at all. To add to the sorry state of affairs, the Union Home Minister said on December 16, 2013 (the anniversary of the December 16, 2012 Nirbhaya gang-rape) that the Fund will be utilized “soon”.

I am only illustrating the callous attitude that we as a nation have towards the safety of women, notwithstanding the amendments to the Indian Penal Code and the Criminal Procedure Code, candle-light vigils, setting up of funds, special courts and what have you. We are not ashamed when an international survey by the Thomson-Reuters Foundation calls us the fourth most dangerous country for women after Afghanistan, Congo and Pakistan. Notice here that even countries with fundamentalist regimes and stone-age attitudes are safer for women than India.

We are also not ashamed when the Business Insider website rounds up 8 countries where women should be extra cautious and names India as number 1 on the list, followed by Brazil, Turkey, Egypt, Colombia, Guatemala, Mexico and Kenya. If women tourists are safer in Afghanistan, Pakistan, Bangladesh and other such countries than they are in India, it says a lot about our attitudes, legal system, governance and sensitivity.

Plenty of statistics also point towards India being horrifyingly unsafe for women, but who needs statistics? From leering and groping to molestation, rape, trafficking, acid attacks, child marriages and other such insidious acts, we as a country stand out from the rest of the world. This does not take into account what many women go through in their own households- from the dowry related taunts to beatings which almost always go unreported.

Let respect for women begin at home. Let us treat our wives and daughters with the respect they deserve, only then will we look at women outside our four walls with different eyes.

“Humankind is made up of two sexes, women and men. Is it possible for humankind to grow by the improvement of only one part while the other part is ignored? Is it possible that if half of a mass is tied to earth with chains that the other half can soar into skies?” ― Mustafa Kemal Atatürk

“Of all the evils for which man has made himself responsible, none is so degrading, so shocking or so brutal as his abuse of the better half of humanity; the female sex.” ― Mahatma Gandhi