An Indian mom teaches her young son about expressing love and communicating his feelings. 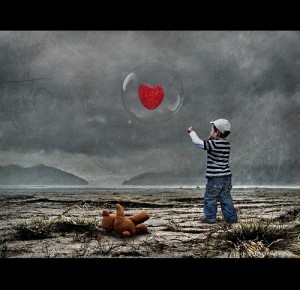 The little boy was angry. He kept saying he was. He built barricades with his toys at the door to each room. Everyone was amused. He looked utterly cute. It ceased being cute when the boy protested at potty time, and then refused to bathe. An hour passed. He finally did bathe and all was quiet for a few minutes. That was when it dawned on the mother.

Just then he came out of the bathroom wailing. The mother rushed to hug him. As she held him tight and they snuggled, she said she loved him. She said it again. She stroked his back. He calmed down.

Then, she asked him how he felt. He said he was angry. ‘What did that mean?’ she asked. What did he want? He said he wanted to be shown love. ‘I know’ she said, ‘I know’. He continued talking. He said he felt he was not loved, because she had not done what he wanted. It was a simple thing, but she hadn’t done it. If she loved him why would she not do what he wanted? Ergo, she didn’t love him. So he felt angry.

“It’s better not to love someone so much, that’s the problem”, he wept. She had tears in her eyes too. The boy, all of five, had come to the conclusion that love causes hurt. ‘Don’t think that way. Yes, love can cause hurt, but it also makes you very very happy. Without it, you may not feel hurt, but you will not have the happiness either. Would you rather have lots of happiness and a little bit of hurt, or nothing at all – no hurt and no happy feeling?

She held him close and spoke to him softly. When someone doesn’t do what you want, it doesn’t mean they don’t love you. Maybe they are busy, or tired, maybe they just don’t want to do it. When I ask you to go down to play, but you don’t, does it mean you don’t love me?’ “No”, he smiled a bit now, “it means I don’t want to, because I’m reading.” “I feel better, very little better”, he added.

But it was not over, she had more to say, ‘No one will understand if you say you are angry. You have to say what you want.’ “You understood”, came the reply. “I’m your mother. No one else will understand. And even me… it took me more than an hour. I didn’t understand for an hour.’ she said. That seemed to disturb him. Why didn’t she understand for so long? All along he had been building walls to make himself be heard, to be understood, to get attention – it had not had the desired effect.

‘Say you want to be hugged, tell people to show you love, if that’s what you want. Otherwise, they won’t understand. And ask with love. Not in anger. If you ask angrily, it will be tough for them to show you love. It will be easier if you ask them with love.’ He sobbed in response “That is very difficult”. ‘I know’ she said, ‘I know. But it has to be done. If you practice from now, it will be better for you. You are starting at five, I began much later’. “I feel little better now”, he said, sounding better.

They hugged some more, kissed each other, talked some more. “My friend X loves me a lot, even if he doesn’t do what I want. I love him a lot… more than I love you, because you’re always with me, I don’t feel the love so much”, said the little voice. ‘That’s why I didn’t understand for an hour’, she explained, ‘Do you see this curtain? You don’t notice it because it’s always there. You say you don’t feel the love much because I’m always around. I’m like this curtain.’ He laughed quietly.

She went on, ‘If you had not been full of love for me, it would not have mattered so much. I didn’t know you would feel this way. You should not treat me like a curtain.’ He smiled and nodded. “I still feel only little better. First it was very little, then little, but after that it’s not increasing fast”, he said. ‘That’s how it will be. No one can help you beyond that. You have to help yourself feel better. Tell yourself you are loved, and start doing something. It will get better gradually’, she left the room.

He got dressed and came out a little later. As he picked up his toys to play, one of the earlier onlookers asked him what happened. “Talk”, came the response. On being probed, he said “About love.”