Was Vivekananda a feminist? Vivekananda's quotes on women demonstrate his keen interest in women's empowerment in India 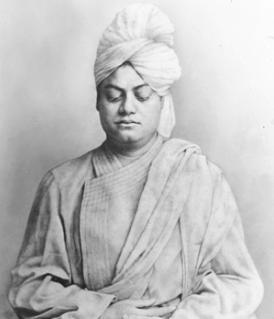 Known as an advocate for enlightened religion, you may surprised to learn of Vivekananda’s beliefs about women. These gender equality quotes from him will get you thinking.

January 12, 2013 is the 150th birth anniversary of the great thinker the world knows as Swami Vivekananda. It is well known that Vivekananda received a three minute standing ovation from thousands assembled at the World Parliament of Religions at Chicago in 1893, when he began his address with the words “Sisters and Brothers of America”. However, few know about his life and teachings. Fewer still know of his views on women in India.

He was born Narendranath Datta on 12 January 1863 in Bengal. His father was intellectual, generous, progressive and supported remarriage of widows. His mother was his father’s peer in every respect. Exceptionally intelligent with an unusual memory, she was highly respected. She read aloud the Ramayana and Mahabharata to young Naren, and spoke of the greatness of the sages of India. She sang beautifully, was deeply religious and had absorbed the essence of the epics. Apart from devotion and values, Naren learnt Bengali and English from her. From his father, Naren learnt music, Sanskrit, as well as generosity and nobility. In his boyhood, he was an exceptional student with a prodigious memory, and a sports enthusiast who picked up many skills including fencing, rowing, swimming, riding, wrestling and cricket. He was an accomplished cook, and would often prepare feasts for friends. He started an amateur theatre and then his own gymnasium.

Later, he focused all his energy on intellectual and spiritual pursuits. India under British rule reeled under poverty, and Vivekananda strove to restore her past glory.

Highly apolitical and truly secular, he saw all religions as different means to the same goal. A visionary, he wanted India to learn about modern science, technology, industry and organisation from the west, while retaining eastern spirituality. He felt the west too would benefit from Indian philosophy.

Vivekananda did not live to see his fortieth birthday, but achieved a great deal in his short life. His words on rising above fear and being free are inspiring, and we can strive to apply them in our own lives.

Over a hundred years ago, Vivekananda blamed the neglect of the masses and the subjugation of women for India’s downfall. He saw empowerment as the answer.

On several occasions, he spoke forthrightly about the state of women in India.

“Is there any sex-distinction in the Atman (Self)? Out with the differentiation between man and woman—all is Atman! Give up the identification with the body, and stand up!”

“Woman has suffered for eons, and that has given her infinite patience and infinite perseverance.”

He debated passionately in favour of education and liberation of women.

“Women will work out their destinies—much better, too, than men can ever do for them. All the mischief to women has come because men undertook to shape the destiny of women.”

“Educate your women first and leave them to themselves; then they will tell you what reforms are necessary for them. In matters concerning them, who are you?”

“The idea of perfect womanhood is perfect independence.”

Swami Vivekananda expressed his wish to start a math for women, for their education, one that would be run by women for women. When his disciple argued against it, Vivekananda won him over with these words –

“It is very difficult to understand why in this country so much difference is made between men and women, whereas the Vedanta declares that one and the same conscious Self is present in all beings. You always criticise the women, but say what have you done for their uplift? Writing down Smritis etc., and binding them by hard rules, the men have turned the women into mere manufacturing machines! If you do not raise the women, who are the living embodiment of the Divine Mother, don’t think that you have any other way to rise.”

“In what scriptures do you find statements that women are not competent for knowledge and devotion? In the period of degradation, when the priests made other castes incompetent for the study of the Vedas, they deprived the women also of all their rights. Otherwise you will find that in the Vedic or Upanishadic age Maitreyi, Gârgi, and other ladies of revered memory have taken the places of Rishis through their skill in discussing about Brahman. In an assembly of a thousand Brahmanas who were all erudite in the Vedas, Gargi boldly challenged Yâjnavalkya in a discussion about Brahman. Since such ideal women were entitled to spiritual knowledge, why shall not the women have the same privilege now? What has happened once can certainly happen again. History repeats itself. All nations have attained greatness by paying proper respect to women. That country and that nation which do not respect women have never become great, nor will ever be in future. The principal reason why your race has so much degenerated is that you have no respect for these living images of Shakti. Manu says, “Where women are respected, there the gods delight; and where they are not, there all works and efforts come to naught.” (Manu, III. 56.) There is no hope of rise for that family or country where there is no estimation of women, where they live in sadness. For this reason, they have to be raised first; and an ideal Math has to be started for them.”

Read more of this conversation at http://www.vivekananda.net/BooksOnSwami/DiaryPart2/18.html.

Some fifty years after his passing away, in 1954, the Sarada Math was formed.