It looks like the Grand Indian Wedding is here to stay; have simple weddings with their charm lost out in the quest for an "event"? At a recent wedding, the groom strode onto the dais amidst dancing girls clad in skimpy costumes making suggestive gestures. Nobody seemed to notice the incongruity of a man embarking on his married state in the company of nubile nymphs. Then the demure bride walked in. She, in her turn, was accompanied by bare-torsoed men who pranced around her in ‘manly’ steps suggestive of male aggression. It didn’t require an anthropologist to notice the symbolism of a bride and groom approaching each other with such stereotypes in tow.

It was obvious that no thoughts of any kind of symbolism had crossed the couple’s mind. All they wanted was to get married in the most lavish style possible. In fact, they both looked ill at ease and most unlike their natural, bubbly selves as they tied the knot. The elaborate ceremony had defeated their ebullience conclusively. 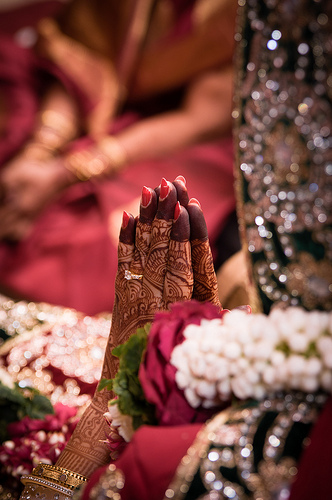 Wedding celebrations are getting more and more complicated as Bollywood and pallid Indian TV shows overtake our homes. To have just one wedding feast is now considered passé in the Indian middle class. It is obligatory to indulge in multiple celebrations, complete with choreographers and event managers. Wardrobes of the bride and groom must be coordinated, beauticians and fitness experts must be lined up well in advance, and those who can afford it, have wardrobe fittings with well-known designers for months before the event. Everyone in the family scampers around to ensure that the most perfect day in the bride and groom’s life also ends up being its most impersonal.

It’s an unstated question but one that bears asking. At the end of celebrations that would exhaust even the X men, how do the newly weds have sex? Or does that aspect of marriage suddenly become irrelevant? On that flower-strewn bed that is the culmination of every marriage, big or small, what do the husband and wife do? Even the guests are in a state of collapse after attending such eventzillas.

In the metros, it is a feat of endurance merely to mark one’s attendance at the multiple celebrations that have become the hallmark of grand weddings. Driving across town day after day is a challenge of mega proportions. It is also inconsiderate of the hosts to expect such attendance.

But be that as it may, the main point remains. How romantic do the bride and groom feel at the end of the perfectly choreographed event that lays bare their most private moments? How do they face each other through the thick layers of sequined clothes and jadau jewelry that are now standard attire at such affairs?

Simple weddings, it seems, are no longer fitting testimony to the commitment of marriage. And yet simple weddings are so much more conducive to romance and the advent of change. The beauty of exchanging vows in the presence of one’s loved ones. Can it be topped by something that would put the World Economic Forum to shame? The laughter and comfort that attend a bare bones ceremony can never be replaced by the elaborate rituals of a monster event.

In a more evolved frame of mind, the bride and groom would spend the time that they would otherwise devote to beauty care and wardrobe fittings on creating lyrical vows, the kind that demonstrate their love for each other. As for the six day long galas that attend any society wedding, let society people take them up. They are anyway used to living their lives in an open air theatre.