Food For Thought; A Thought For Food

Indian weddings are among the most ostentatious weddings ever! Do we really need such expensive weddings? 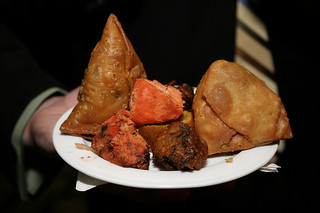 We are a nation of people who love to indulge in excesses. We show this enthusiasm for excesses during social functions such as weddings, engagement ceremonies and birthday parties, to the extent that they become circuses rather than social functions- the richer we are, the more we like to make public spectacles of our money and so-called ‘connections’. We also love hierarchies- more so if we can climb to the top of them by means fair or foul.

Let me stick to weddings- our self respect hangs by a thread on how many cuisines are served, and how many white clad netas with their retinues of black-cats and other hangers on attend our functions. Our self respect is also dependent on whether the groom drops from a helicopter or whether the bride’s trousseau has been imported from France. A recent wedding of Congress politician Kanwar Singh Tanwar’s son had over 15 thousand guests, the groom got a Bell helicopter as part of the dowry, the dinner had over a hundred dishes, and apparently the groom’s barber was given a $ 5000 tip! According to media reports the entire drama cost over $ 55 million.

This in a country where most people cannot afford two square meals a day, where children die of starvation as a matter of routine, and where simple healthcare is missing over large areas. Also, a minister from the same Congress party of which Mr. Tanwar is a member, had recently told the nation that 15% of India’s food is wasted in such ‘extravagant and luxurious functions’.

To delve deeper into the food crisis, a Hindi news channel recently showed a clip on food wastage during social functions such as weddings in India- it quoted government statistics and informed us that food worth Rs. 58, 000 crore is wasted annually in the country during weddings, birthdays, death ceremonies, kitty parties, etc. Compare this with the food subsidy the government will shell out once the National Food Security Bill becomes law- Rs. one lakh crore: that is to say that if food wastage during weddings, etc. is somehow stopped, the government will save 58% of the food subsidy cost!

In the 1960s the Government of India had halfheartedly tried to curb ostentation during social functions through the Guest Control Order, 1960, which restricted the number of guests at weddings in order to control the wastage of food; now the Government is mulling a new version of the Order (through a piece of legislation this time) to curb wastage of food during weddings!

One aspect of this ostentation and wastage during weddings is dangerous- the not so well off are aping the rich and spending far beyond their means to keep their self respect ticking; and more dangerous is the fact that most of this expenditure is borne by the bride’s family. This aping of our social or economic ‘superiors’ is what sociologist MN Srinivas had called ‘sanskritization’; this hierarchy- and trying to climb it- of ostentatious spending also reminds me of Homo Hierarchicus: Essai sur le système des castes (1966) by Louis Dumont. Both the concepts- ‘sanskritization’ and ‘homo hierarchicus’ were coined keeping the caste system in mind, but apply so well to mindless aping of near about anything.

We Indians are the most hierarchical society ever- the most undemocratic in a democracy! Our riches, our ostentation, our ‘connections’ so much on display during weddings, tell us apart from the hoi polloi, never mind the cost.