Women's liberation and empowerment in India: examining the reasons for why it is so superficial 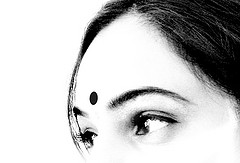 Arunima’s post ‘Liberated…With Clauses’ reminded me of something my younger daughter told me a while ago. She was talking about a classmate of hers in college who wants to do an MBA later. This girl mentioned her MBA dream to her dad who shot it down in a second, asking her to do something in ‘home science or flower decoration’ instead.

Now, this is a girl studying in a premier college where only the best and the brightest get through, but this education obviously has a clause attached- that she is being prepared only for marriage, and any other dreams she might have better be forgotten right away. (Remember Vrinda Nabar’s poem in my earlier post ‘Whose Fault Is It Anyway?’) So many sociological concepts and theories come to mind – a woman has to play so many intense domestic roles as it is – those of a daughter, wife, mother, daughter-in-law, etc, sometimes one in conflict with the other; add to this the suppression of her own dreams and the subjugation of her real self and it becomes a socio-psychological nightmare. Role conflict can be an emotional roller coaster ride even at the best of times, and I shudder to think of a woman who has to balance statuses and roles day in and day out, many a times replacing one role with another with alacrity simply because others say so, or because it is expected of her.

Another thing- while we are catching up with modern technology almost at the same speed as it comes into the market, our thought processes, beliefs and norms of behavior continue to be medieval, or even if I am charitable, take a long time to catch up with technology, creating what is called a cultural lag.

Sociologically speaking, the material culture (such as technology) outpaces the non-material culture (such as our beliefs and norms) by light years. A sociologist had given the example of a rocket launch by the Indian Space Research Organization (ISRO); he said that while the rocket itself was a technological marvel, it was launched with a ritual involving the breaking of a coconut and the chanting of religious mumbo-jumbo.

I have an analogy here – horoscopes are matched on astrological websites – the cultural lag is so obvious here, as it is when grooms and brides are matched online. Weddings take place with all the latest technology there is- laser lights, blaring sound systems, fancy cars, grooms dropping from helicopters, under-sea weddings, and whatever else money can buy, the priest carries a Blackberry, the caterer can differentiate caviar from the North Sea from its synthetic counterpart; and yet at the end of it all, the bride goes into her husband’s home with ghoonghat, sindoor, bindi and all, mentally preparing herself to fit into the role of a traditional housewife who might or might not be allowed the freedoms she may have taken for granted so far. (I am not even going into the question of when women will be able to decide on their own partners, or to remain single)

She will carry a cell-phone, but her calls might just be monitored; she may drive a car, but she must always wear a saree; and her first-born must be a son, or Heaven help her.