Whose Fault Is It Anyway?

Why do we encourage the dowry system in India till today? 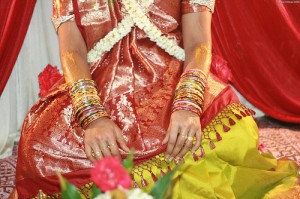 I often read in newspapers and see on TV with nauseating regularity that some helpless woman somewhere in the country has been killed for dowry. Some die within weeks of marriage, some within months or years, but the underlying story is the same- the greed of the in-laws. It is a never-ending cycle of marriage-dowry-death, and yet we learn no lessons.

A very sad aspect of this issue is that many a times the woman does let her parents know about the beatings, the taunts and the demands, but what do her parents do? Tell her to ‘adjust’ because now she belongs to the husband and her family; give in to the dowry demands till they can; or just ignore the pleadings of their own daughter, and brush the cruelty under the carpet till it is too late. After all, the izzat of the family is paramount. What will people say? How will we face the world?

To me the dowry giver is as much to blame as the dowry seeker. I know many people will tell me that I don’t understand, that dowry is part of the Indian system, that marriages can’t take place without giving ‘something’, that what they give is for their daughter’s happiness, etc. etc. ad nauseum. This is utter nonsense and an admission that we, as parents of daughters are weaklings, and once we have washed our hands off our daughters, we can put our blinkers on and go on with our placid lives where our daughters do not remain ours, for haven’t we done their daan– kanya daan it is called, isn’t it? My Hindi is not so good, but to me daan means donation or gift, as in giving away. We don’t just give away our daughters; we give away our self respect and our responsibility towards our daughters and leave them to die. They die less because of dowry and more because we cease to be parents; because we hand them over to others lock, stock and barrel, more particularly in these cases we give away our daughters’ lives, limbs and liberty.

And then we weep, we blame the system, we scream for stringent punishment for the in-laws and the husband, we curse the police and the courts, yet even now we do not have the guts to own up to our own responsibility- that we were willingly part of a system that is unfair, unjust, inhuman and plain pathetic, and we pushed our daughters into it, because after all, dowry is part of our culture.

Now did I say culture? What kind of culture is this? Can we, at least some of us, stand up and say no? But again, saying no won’t be so easy, because we have not brought up our daughters to be self-reliant, thinking human beings. We have brought them up to be educated enough to marry into decent (?) families, produce children- I mean sons, cook, clean and be nursemaids to the whole household of the husband. After all, a daughter is paraya dhan– someone else’s property, for that someone to decide whether she lives or dies.

About the fate of our daughters- how we bring them up, and what we do with their lives, I can’t put it better than Vrinda Nabar, who, in her fantastic book ‘Caste as Woman’ (Penguin India, 1995), says, and I quote:

Bring out the silver & polish the brass
Brush off the cobwebs, and clean all the glass
Unlock the pantry, lay out the food
Keep away grandma, her manners are crude.

We’ve got a daughter we are willing to sell
He is the bargain, the profit as well
He’s coming to see for himself, so he said
How she and our money would look in his bed

Our daughter’s a graduate, he’s no cause to moan
She’s a well brought up girl with no mind of her own
She speaks English well, has a fair pretty face
And is five foot four inches by Lord Bhagwan’s grace

Of course she’ll be happy, I’ll tell you that flat
She’ll have her own home, produce brat after brat
Forget all her youth, as she spins out her life
In waddling behind him, a good Indian wife.

And she’ll long to have sons; they’re boons from above
Take it from me that they’re proof of God’s love
And when all her daughters are suitably grown
She’ll marry them off as we’ve done our own.

Finally, this is what I read about the meaning of kanya daan on the WWW:

“The ritual of Kanya Daan is considered very auspicious in Hindu religion. It is a very pious and dutiful ritual which is said to bring fortune as well as relief from the sins for the bride’s parents… Kanya Daan means when the father hands over all his rights and duties towards his daughter to her prospective groom. This way the father gives her daughter as a gift to the groom. As per tradition, groom is considered a form of Lord Vishnu. Thus, presenting him gifts is deemed as the greatest honor for the parents of the bride. As a result, they offer their daughter to the groom, who is their most cherished gift. As a symbol of acceptance, the groom touches the right shoulder of the bride, promising to take care of her and holding her responsibility…”

Am I correct in assuming that giving away my daughter to an “incarnation of Lord Vishnu” (how sick can one get?) will give me a fortune and wash away my sins?