What have great men over the ages said about women? Let's find out! 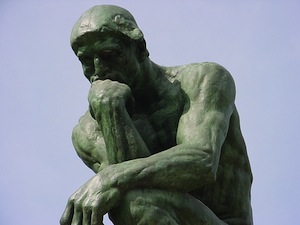 Aparna’s post ‘Great Things About Being A Dimwit’ made me do a quick search on Biben Laikhuram, and I found on one of his online profiles that he has no friends, at least in cyberspace. That didn’t really surprise me, with the kind of juvenile trash he comes up with- he seems fixated with women and some of the trash he has written makes me wonder as to what extent the Times of India’s standards have fallen.

He might not have friends in cyberspace or otherwise, but he sure has exalted company. He assumed that men don’t “need” women, but purely desire them for sexual gratification; however, women on the other hand do “need” men for protection and in order for them to take their “natural” role as a wife.

In his book “Sex and Character” he referred to women as being amoral and illogical, as they were suggested to lack what he referred to as the “intelligible ego” – the part of the human character that regulates ethics and rational thinking.

“Women can, of course, be educated, but their minds are not adapted to the higher sciences, philosophy, or certain of the arts. Women may have happy inspirations, taste, elegance, but they have not the ideal…If woman were to control the government, the state would be in danger, for they do not act according to the dictates of universality, but are in influenced by accidental inclinations and opinions…”

“Only a male intellect clouded by the sexual drive could call the stunted, narrow-shouldered, broad-hipped and short-legged sex the fair sex: for it is with this drive that all its beauty is bound up. More fittingly than the fair sex, women could be called the unaesthetic sex…it lies in the nature of women to regard everything simply as a means of capturing a man, and their interest in anything else is only simulated, is no more than a detour, i.e. amounts to coquetry and mimicry.”

“I don’t think a prostitute is more moral than a wife, but they are doing the same thing.”

He apparently told the Guardian that his former publisher, Diana Athill, “was so good as a taster and editor, (but) when she became a writer, lo and behold, it was all this feminine tosh.” He dismissed all writing by women because of what he views as their “sentimentality, the narrow view of the world.”

He once singled out Jane Austen for withering criticism saying that he “couldn’t possibly share her sentimental ambitions, her sentimental sense of the world”. Another time he described the work of leading Indian female writers on colonialism and oppression of women as “banal”.

According to him women writers had a “narrow view of the world” and were too “sentimental”. This was because a woman was “not a complete master of a house, so that comes over in her writing too”.

Naipaul, (speaking for all dimwits?), loves women otherwise, and let me quote, “I don’t hate women, I love women! I’m married to one, I have female friends, I love sleeping with women…”