We live in a world where we evaluate a woman based on her private life and both men and women are taught to address certain women as sluts or bad characters. 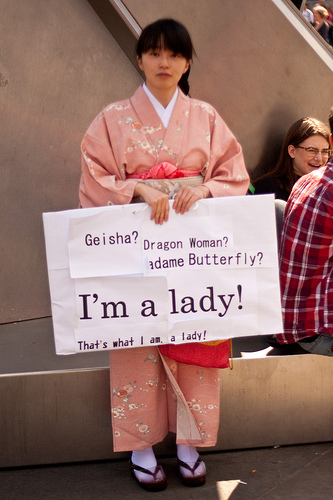 Guest Blogger Rinzu Rajan describes herself as a single woman, struggling to shrug social compulsions and religious rigidity, who writes poetry and is a published poet. Helps women the society has loathed at, and is making an effort to put her wile and wrath on paper to untie the blindfolds of people who consider women a weaker sex. She writes at www.rinzurajan.blogspot.com.

A recent Facebook spat prompted me to write this. The guy in question thought he could get away easily with his one sided opinion about divorcees or single mothers or women as a whole. And then on a recent visit to a friend who calls herself a womanist, I got to know about a perception many Indian women had against people of their own race. Was she a womanist? I doubted it!

I don’t know why we are not so strongly opinionated against men who are two timing their wives or are incarnated forms of the devil. We were from childhood taught to form opinions only against woman, because in our great country a woman is a symbol of modesty! Dare she deviate from her model roles and choices in life, she becomes a slut and what not. And the best thing is that other women, people from her own breed would be up in arms against her. Don’t know what should such women, trained in docile patriarchy be called. But then men have been given all the privilege to do anything in life. No questions against them! No opinions and more so no “character certificates” for them!

Oh, she is a woman! Yes, so? Prying eyes that almost dig into the crevasses of your cells to find out what kind of a woman you are. And then the next question might generally be revolving around your relationship status. If you have a Mrs. prefixed before your name, you become the eternally sinless Goody Two shoes. If you’re single you become a slut who is unmindful and undeterred by burdensome ideologies in life but must surely be sleeping around with three men at that time. And if she has issues befriending a man she becomes a lesbian with a big “L”.

If she is a woman who made a strong unfettered decision like annulling her marriage for whatever reasons, she suddenly becomes something else. As Indian women, we are expected to be the model of devotion, sacrifice and love. And yes, one must note that in most cases, she might not be asked to love herself. Oh, that is the right she was denied the moment the doctor at the hospital said, “It is a girl.”

Then there is the other breed of women who get into relationships trusting that she will finally end up with the man. She gives the man conjugal rights and toils to see if the union will work. Sometimes what she gets from the deal is a child, a love child that gives her the tag of being a bad woman. For her guillotine of guilt to not execute her, she must abort the child; if she decides to keep the child she becomes a pooch with puppies – not worthy of any respect.

Opinionated! We Indians are especially assessing a woman all the time and our imagination can run the wildest when we convict her to be anything, just anything under the sun.

The other day I went to meet a friend. While we were having a talk on former crushes she happened to talk of a Christian guy she liked. And how he had vindictively considered her to be vulnerable. One statement that resulted in the melting of my grey cells was that the guy ended up with a woman who was a “gone to bed types”. Suddenly the personal choices this other lady had made in her life became the only assault weapon my friend wanted to use against her. I have no words to describe such women who have so much conceit against people of their own sex.

Why? Because, we have been pathogenically infected by patriarchy and its venom has managed to adulterate every woman who has let her father or brother or her husband do the talking. By the way, this lady in question calls herself a feminist!

We live in a world where we can tirelessly evaluate a woman based on her private life and maybe we were both as men and women taught to address such women as sluts or bad characters. Okie, I have a doubt here! Do we still live in a free world or aren’t we in some way a docile Talibanized people who have christened a woman to be the mantle of modesty that can be looked upto? Aren’t a woman’s choices her own and shouldn’t those be respected? Just the way we choose to stay speechless about men who are two timing their wives well into their marriages or those who have made it a deed and discourse to rape their wives every night as an act of mutated masculinity.