Women who smoke or drink in India are viewed through a different lens by society. 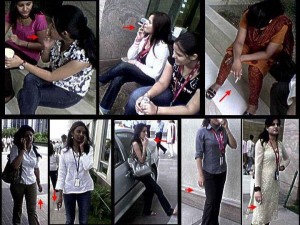 A few years back, I had recently joined a leading software company in Chennai. Trainees from all over India were undergoing training together. I distinctly remember one particular lady from Kolkata. She was not in my training class and I have never spoken to her; in fact I don’t even remember her name. Yet she was highly popular. For what, you ask? Well she was well known by her nickname, “Dum akka” – which in Tamil slang translates to a lady who smokes. During coffee breaks, she used to confidently light up amidst a gang of guys, even though she was the only lady to do so. It was a strange sight for the rest of us, to watch a lone woman happily puffing away, unselfconsciously, unmindful of the numerous stares that she was being rewarded with.

I am in no way a supporter of smoking and to be honest I did join in the laughter when people passed snide comments about our dum akka. But looking back today, I am not sure if her addiction got the better of her; or if she truly did not care what the rest of the world thought of her – she was going to do what she wanted to do. The opinions and remarks of others did not stop her. I admire her guts.

For quite some time now, some updates that a few friends post on Facebook have been catching my eye. Typically these are photos of women smoking or drinking – which is explicitly highlighted; such as the one shown here. Has anyone ever put up pictures of men smoking in the same way? No. And why not? More than the pictures, what irks me even more are the comments that accompany them. Although a few might just find it worth a laugh, the majority of the comments are so base that the blood boils just being aware that such people and such thinking exist in our world today. The comments range from the morally outraged, “What kind of women are these? Are they even women?”, to the socially outraged,  “India’s future is shining brightly”, “So this is what the new age empowered women in meant to be, is it?”. The self-appointed honour guardians throw in their tuppence worth by saying “Such ladies deserve a tight slap”, “Instead of giving birth to women, people have given birth to these lowly scoundrels”.

And then, there is the issue of women drinking. There was this video where two good-looking girls dance to the famous Kolaveri song; with actions. Whether they are drunk or not is anybody’s guess but I found the video quite harmless – goofy at the most. But the kind of comments that it elicited was truly appalling. “Bharathiyar kanda puthumai penngal ithugathaana?”, “kudumba kuthuvilaku”, “ithungala pethathuku rendu sothu mootaiya pethirukalam!” It is quite difficult to translate the full meaning and impact of these Tamil statements but for those who don’t understand, the gist is more or less a repeat of the above comments.

So if a guy sings and dances to the Kolaveri song (or whatever) it immediately becomes a rage and gets repeated at every show on earth, not to mention spawn off a series of spoofs, till you’ve had more than enough; but women? Oh no! We are not supposed to do such things. Because such activities are shameful to women and if women indulge in them, Oh gosh! What will happen to the world!?

The issue here is far beyond the mere fact that women have the right to make a choice whether to smoke/drink or not. Apart from highlighting the spirit of intolerance, it also goes to reinforce the fact that society has a set of rules that expects Indian women to behave only in a particular way that it deems to be right. Anyone who crosses those boundaries are viewed as almost villainous witches who are spoiling Indian ‘culture’ and who don’t even deserve to be women.

I am not justifying smoking or drinking. To each his own. If someone out there says that drinking and smoking are harmful to health, then I can appreciate their sentiment. Or if someone points to a pregnant woman and advices against smoking/drinking, I can take it as genuine concern. But other than that, singling out women alone and running them down for smoking or drinking is by no means anyone’s prerogative.