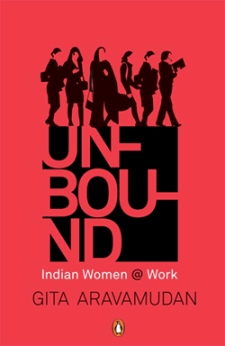 About 20 years ago I was being interviewed for a job in a well known Calcutta advertising agency. At one stage in the questioning, the Creative Director of the agency, a man who should have known better asked me, “How would you tackle working late at night in a department filled with men?” The question did it – deciding the man was narrow minded and insensitive, I turned down the offer and joined another agency which had also approached me. Reading Gita Aravamudan’s Unbound, a study of Indian working women, makes me think that things have not really changed where men’s perceptions are concerned, despite India shining, and powerful women at the helm of politics.

One of the issues Unbound: Indian Women @ Work covers is that of women working late in close proximity to men and Aravamudan has fresh ground in the call centres that have sprung up across the country. She uses actual case histories to make the different points that she covers which begins, rather predictably, with what it means to be a married woman holding down a job and how gender gets in the way. The questions that she tackles range from how a working mother balances work and family to the not so usual issue of item girls and sexual harassment, through various shades of work problems that include men balking at being trained by a woman and then when the training turns out successful, commenting that it is hard to criticise a woman because women are so sensitive.

Aravamudan’s case histories cover both the positive and negative aspects in many cases, though all the case histories are equally in-depth. It appears that even she has her favourites, as for example the cases of call centres or the consequences of what happens if you have an affair at work while being married or sexual harassment in a corporation – which at one level boils down to that question I was asked about working with a department full of strange men late into the night. She also delves into harmful environments where women are at threat from unsafe employment conditions.

‘These were successful women indeed. High earners, world travellers…but…the old problems had not gone away,’ is Aravamudan’s conclusion at a high profile NASSCOM Women Leadership Summit in 2007. Her findings are based on research that covers Delhi, Mumbai, Bangalore and Chennai – the east, for the most part is left out. Her focus is also on corporate jobs rather than covering careers like the police force, or even the army, though she does deal with item girls and their problems – most notably the case of the Kaanta Laaga girl Shefali who went into an abusive marriage – and with what it means to be a woman DJ if you come from a conservative background.

Single women are given one chapter – possibly because they are already unbound and do not have to worry about husbands and what they might or might not think or do, though single women are at threat from sexual harassment. Aravamudan’s world is the urban sphere – women farmers, women entrepreneurs in rural areas are not dealt with. The conclusion she reaches is that women are capable of penetrating the glass ceiling, but they need to ‘have the confidence that your gender cannot hold you back’.

For a working woman perhaps, Aravamudan’s discoveries may not prove to be too much of a revelation though some may be happy to discover that they are not alone in the problems that they face. For those interested in gender studies and overall listings, Unbound: Indian Women @ Work will provide insights into a world that they may not have previously thought about.

If you’re planning to purchase Unbound: Indian Women @ Work by Gita Aravamudan , do consider buying it through this Women’s Web affiliate link at Flipkart. We get a small share of the proceeds – and every little bit will help us continue bringing you the content you like!