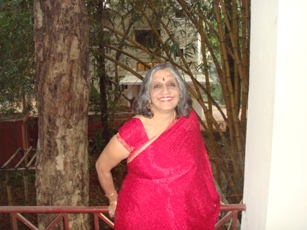 Unbound: Indian women at work by Gita Aravamudan looks at working women in India – their challenges and how they’re changing workplaces.

Gita Aravamudan started her journalistic career in the 1960s when female journalists were still not common in India. Since then, her writing has been wide-ranging – from fiction to critiques on cinema. Of special interest to us, is her extensive writing on gender and women’s issues. In 2007, Penguin published her Disappearing Daughters, on female foeticide in India – a book that was received very well by readers and generated much discussion on the subject.

With her latest book, Unbound: Indian women at work, Gita again plunges into a subject very much on the minds of Indian women at present – the world of career, ambition, earning and the conflict with other roles that form a large part of their lives.

Aparna V. Singh (AS): Your last book, Disappearing Daughters tackled the subject of female foeticide in India. From that to working women in India and their challenges – how do you choose the subjects that you will cover?

Gita Aravamudan (GA): Disappearing Daughters happened because Penguin wanted me to do a book on gender issues. I had already done a series of articles on female infanticide in rural pockets of Tamil Nadu and I could use that as a base. I knew that the gender ratio was getting alarmingly skewed in our country. I thought it would be interesting to look at why this was happening. It was a depressing book to write.

I am a journalist so basically this was an investigative report rather than an academic treatise. I travelled all over the country and talked to women and men, to families, social workers, activists and academics. I came to realise that unlike infanticide which happened among poor, illiterate, rural families, foeticide was a crime committed by the educated middle class and rich people. They aborted their daughters not out of ignorance or poverty but specifically because they considered them to be economic burdens.

…unlike infanticide which happened among poor, illiterate, rural families, foeticide was a crime committed by the educated middle class and rich people. They aborted their daughters not out of ignorance or poverty but specifically because they considered them to be economic burdens.

In that anguish, my next book Unbound was born. In this book I wanted to prove that women could be right up there amongst the economically most productive. I wanted to write a book which showed that women can be high achievers and major wage earners provided society gives them the space to function as complete human beings.

AS: Unbound:Indian women at work deals with women working in many different fields – from entertainment to the corporate sector; were there common themes that emerged in terms of the challenges that these women spoke about?

GA: Certain themes are common to working women all over the world no matter what the job or the pay – bearing children and rearing a family is always a challenge. So is marriage and domestic commitment. Sexual harassment, safety at work and on the job, dowry, family support – these were some of the other common issues which came up whenever I spoke to women.

AS: Tell us a little about the process; you must have come across many, many stories. How did you decide finally on the ones to be used? What was compelling about them?

GA: I shortlisted and interviewed nearly 200 women for the book but used only about 50 of the interviews. My friend Sudheshna Shome Ghosh at Penguin held my hand right from the start to the finish and helped me to sort through the stories and place them thematically. I decided to focus on women in new age jobs between the ages of 25 to 40 who are serious about their careers. I wanted to get an across-the-country cross job sampling but decided to stick to the big cities. Obviously many of the stories were similar though not identical. I chose the one which illustrated an issue best. Then having got the stories together I had to find the pattern; discover what they were trying to tell me.

What emerged was fascinating. I found that there was a new feminine pattern of achievement – a feminine ambition and a feminine approach which was distinctly different from the traditional masculine one.

AS: A ‘feminine pattern of achievement’ – that’s an interesting concept!

GA: When a person puts her (or his) domestic responsibilities on par with her professional commitment, I call it a feminine approach to achievement. Work-life balance comes automatically to such a person because the family provides the cushioning against the often dog-eat-dog office atmosphere.

Also, such a person is able to bring new and more humane perceptions to office management. More and more men are beginning to understand and follow this essentially feminine pattern of achievement where the person strives to seek an even and comfortable balance between office and home rather than soar to great heights at the cost of domestic happiness.

AS: What about differences by age? Did younger women have a sense that things could be different for them?

GA: Almost all the women I interviewed fell into the 25 to 45 age group. Only my two ‘icon women’ (Kiran Mazumdar Shaw and Meena Ganesh) were a little older. I think age had little to do with ambition or approach to work. The ambitious women were ambitious and those who were not… were not! But certainly, I found that the younger women were more confident and self assured and had more courage and hope.

Thank you, Gita – we hope your book gives courage and hope to more women that they can truly pursue their dreams!

Mothers On A New Track (Part 1)