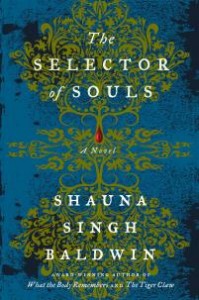 The Selector Of Souls by Shauna Singh Baldwin is a sobering tale of the injustices that Indian women face – right from the womb.

Shauna Singh Baldwin’s third novel, The Selector of Souls, begins with a harrowing instance of gendercide. Damini takes a newborn baby girl to a mountain cave and abandons her there at the feet of a nameless goddess after shoving a plug of tobacco into her mouth.

From that beginning it moves on to welcome characters Singh Baldwin readers have met before in What the Body Remembers; the beautiful Roop, now totally deaf, referred to as Mem-saab by Damini who works loyally for her, and her sons Amanjit and Timcu. And then there is a new character, Anu, a woman abused by her husband and determined to get a divorce at all costs to stop herself from murdering the man in his sleep. She is an odd mix of Sikh and Christian and decides to escape to a convent.

Both Anu and Damini meet in Gurkot, having glimpsed each other once before in the den of a lady lawyer when Damini’s Mem-saab was still alive. But the beautiful Roop is dead and Damini has been evicted from the house by Mem-saab’s vindictive son Amanjot who resents Damini’s loyalty to his mother. Damini takes refuge in Gurkot with her daughter Leela. There she earns a living by taking women to ultrasound clinics and making money from ‘cleanings’ when required. At the same time, Anu realizes that the Church she serves frowns on abortions but does not allow family planning.

Indian readers will find the ground that Singh Baldwin covers very familiar. Issues of gender discrimination fill the local papers and have resulted in villages without brides for the young men – without changing the traditional patriarchal mindsets of people. Kishwar Desai touched on the subject in her last novel Origins of Love, where women were regarded as wombs for rent to be thrown away afterwards. Women in Baldwin’s world are of no use – as children, burdens on their families because they mean dowry and because the inheritance is vested in the sons of the house. Even Anu, who is educated, finds herself at the mercy of a Hindu extremist husband and his family.

Singh Baldwin also crosses the lines between religions. Her characters are Sikh-Hindus or Hindu-Christians with the innate ability to switch backwards and forwards between religions as the occasion suits them. She brings up issues of politics, the agony of Partition followed by Indira Gandhi’s Operation Bluestar, the vengeance of the Sikhs and the struggle between India and Pakistan coincides with the story’s climax. So much so that there seems to be almost an overdose of political and social issues and the main story flounders.

We finally reach the heart of The Selector of Souls after going through the past lives of the two main characters and on the whole the story is rather a joyless one – that despite a surprise in the shape of Anamika Devi and her mysterious cave. While elemental female forces hold out some hope, for the women who struggle to build an identity for themselves, there seems to be no immediate relief.

Singh Baldwin’s strength lies in her ability to portray the speech rhythms and thought patterns of women from the Punjab heartland, in Damini’s perceptions of an alien anglicised world, and the lives of rich persecuted women who try not to look beyond the next necklace. For the rest, she sometimes seems to be trying too hard to appeal.

If you’re planning to purchase Shauna Singh Baldwin’s The Selector Of Souls do consider buying it through this Women’s Web affiliate link at Flipkart. We get a small share of the proceeds – every little bit will help us continue bringing you the content you like!

Readers outside India can purchase The Selector Of Souls through our affiliate link at Amazon.

Help Your Child Stay Away From Home