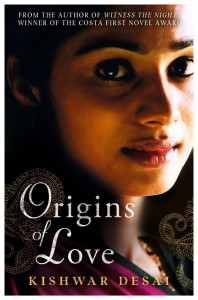 Kishwar Desai’s Origins Of Love examines the surrogate motherhood industry in India against the backdrop of desperate parents from the Western world.

Womb renting has been proving fairly lucrative for many women in India who are using it to bring much needed money home to their families – the more so since many of the womb rental requests come from couples in the UK or US. This is where Kishwar Desai’s second novel begins – with an HIV positive English baby in an incubator and no clue as to how she was infected, barring the fact that she was carried in an Indian womb.

Simran has become a single parent by adopting the girl Durga from Witness The Night but that hasn’t stopped her irrepressible mother from trying to find her a husband. Desai wisely refrains from weaving too much of the previous novel into this so that Origins of Love stands on its own. She moves the location to London, a city she knows well and introduces Kate and Ben, a couple desperate for a child, so desperate that Kate is willing to go in for surrogacy and spend nine months in India. Each chapter brings in a new scenario widening the picture that Desai draws of a world where women can be easily exploited and unscrupulous doctors can make fortunes for themselves.

Simran’s investigations into Amelia’s origins and the death of the baby’s English parents runs parallel to Kate’s determination to find the right womb for her child and to Anita’s futile hunt for an embryo shipment that has been hijacked by the police and diverted to another hospital in Mumbai, with slices of the life of Sonali who thinks that renting out her womb will spare her abuse from her pimp Rohit.

It’s a tale linked by wombs and emotions – with even a touch of romance as Simran meets Edward, a serial sperm donor and begins to find him attractive. These stories make for compulsive reading in themselves.

Desai is far more at home in the London, Mumbai, Delhi scenario than she was with the dark undercurrents of the Punjab. She has a deft hand when she draws the currents and cross currents of official corruption, including the ambitions of female politicians who find themselves without heirs in a country where power is usually passed down bloodlines. The fact that she was a journalist is very apparent in her detailed research.

The novel is not primarily a piece of detective fiction – Simran is a nosy activist who goes asking questions where she is not welcome to help a friend. However, given the fact that the book focuses on the social consequences of surrogate motherhood, it isn’t necessary for Desai to provide a thriller, though there are thrilling undercurrents and a Bengali villain.

Against Western affluence and incomprehension, Desai sets a world of Indian poverty. Never, she suggests, will the twain meet, though occasionally the two worlds can co-exist peacefully side by side.

If you’re planning to purchase Kishwar Desai’s Origins Of Love do consider buying it through this Women’s Web affiliate link at Flipkart. We get a small share of the proceeds – every little bit will help us continue bringing you the content you like!

Readers outside India can purchase Origins Of Love through our affiliate link at Amazon.