The Hundred Names of Darkness By Nilanjana Roy

In The Hundred Names of Darkness, sequel to 'The Wildings’, Nilanjana Roy takes us back to the fascinating world of cats in Nizamuddin, Delhi. 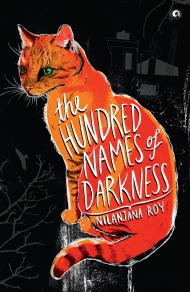 In The Hundred Names of Darkness, sequel to ‘The Wildings’, Nilanjana Roy takes us back to the fascinating world of cats in Nizamuddin, Delhi. Light-hearted with occasional touches of seriousness.

This is the much-awaited sequel to The Wildings, the one in which Mara the Sender steps outdoors as was promised and discovers the outside world. The problem with writing a sequel of course is the fact that a new reader has to be brought somewhat up to date with what happened before, in this case the discovery of Mara as the Sender of Nizamuddin.

As compared with the Wildings, the story of The Hundred Names of Darkness takes some time to settle down, though Roy’s grasp of her subject is far more assured than it was in the previous book. She has worked out her cat world to the last detail. The Hundred Names of Darkness is unabashedly charming and more childlike in its approach. Mara the orange furred emerald eyed young queen still has not gone very much beyond playful kitten hood and Roy has a new cast of animals and birds to introduce to her. Doginder Singh, for example, materialises to rescue her from the tribulations of the great outdoors and save her whiskers from getting into a twist. Then there is the colony of animals who inhabit the golf club, Thomas the peacock and Mulligan the Bengal Cat, not to mention Kooky the koel who is madly in love with golf balls, lives up to the tradition of Urdu poetry to which she belongs and keeps trying to hatch them. TH White’s influence is very visible in the different types of characters.

At the heart of the book is the strength of the tabby cats, Beral, Magnificat and of course Mara, who are the chosen ones, forming the backbone of the feline network. They are responsible for the continuity of the clans, strike a blow for female equality and are also the ones with special gifts. Roy’s observation of birds and animals plays a key role throughout the book, through Mara she teaches a young ground bound cheel the joy of flight, simply through description, or describes the ways bandicoots tunnel underground and repel by smell, among many other things.

And, as in The Wildings, Mara with her Sending saves the day, coming up with a plan to save the cats of Nizamuddin who are in danger of being wiped out by Bigfeet encroachments.

Unlike the war between the ferocious indoor cats and the outdoor cats in The Wildings, there is no such dark edge to this book, unless one counts the Paul Coelho-like recounting of the Hundred Names Of Darkness fable, a riddle story similar to that of Oedipus and the Sphinx.

My own feeling is that the book could have progressed without the fable because the escapades on the golf course and Mara’s search for Southpaw are far more interesting and far more relevant to the story – though yes, cats are creatures of the night to some extent. There are also characters brought in for the sake of continuity, like the tiger from The Wildings, who have no real role to play except to add to the wealth of characterization and another dimension to the animal relationships.

Mara’s relationship with Southpaw, too, matures a little too quickly into something that may or may not result in Part 3 of the series. But, on the whole, The Hundred Names of Darkness is a light-hearted experience with occasional touches of seriousness.

If you’re planning to purchase The Hundred Names of Darkness by Nilanjana Roy do consider buying it through these Women’s Web affiliate links at Flipkart or Infibeam.