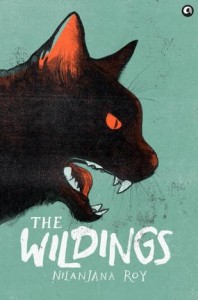 Nilanjana Roy’s The Wildings is a fantastical journey into the intriguing world of cats and the drama in their lives.

In 1992, veterinarian Bruce Fogle wrote that “both humans and cats have identical neurochemicals and regions in the brain responsible for emotion” to prove that “it is not anthropomorphic to credit cats with emotions such as jealousy“. Nilanjana Roy sets out to prove that in her debut novel The Wildings, which is about a group of cats in Delhi’s Nizamuddin area, cats who behave like typical gangs with fights and terrain wars. What is notable though, are the she-cats that she writes about, Mara the mysterious sender who deafens everyone with her telepathic wireless messages. Beraal, the queen of the Nizamuddin cats scents a threat and goes to investigate and destroy.

The result is a collision between two unlikely personalities. Mara, the innocent orphaned kitten who lives with her humans, the ‘Bigfeet’ – actually the human name for Yetis – and Beraal known for her fighting skills but who, catlike and womanlike, falls for a kitten’s charm and misses her kill. Despite Mara having a powerful ability to transmit messages and even make contact with the jungle’s big cats, she remains a friendly, bouncy kitten who gets spanked by her owners for knocking things off the shelves.

Indoor cats are a different world altogether and Roy conjures up another, more sinister houseful of ferals to set against Mara and the outdoor world of the Nizamuddin cats. Then there is the brave Miao, a stray Siamese, which may seem odd to some, though presumably Roy, a befriender of stray cats, knows that Siamese too stray out of their homes and go wilding. Miao is a tabby, again a warrior cat like Beraal, but soft hearted where kittens are concerned. However Mara is an exception to that rule, since Mara represents a force that Miao has never encountered before. But, like the wise cat that she is, she is willing to give Mara the benefit of the doubt.

Many of Roy’s feline heroes and heroines have names out of Bengali nursery rhymes and childhood tales and the important cats have well defined personalities down to the last, sometimes extraneous, twitch of the whisker. However the world of the novel includes other animals too, many of them recognizable from other well loved children’s stories, most specifically the mongoose Kirri whose vocabulary and attitude come from Kipling’s Rikki Tikki Tavi. Roy combines Victorian battle cries, Sanskrit slokas and Hindi, along with a keen eye for detail, to flesh out her animal world.

The conflict in The Wildings comes from the clash between housebred indoor animals who have no rules and the outdoor cats. With the orphan Mara being the only point of difference – she’s terrified of going outdoors because she was born in a pipe and is only used to the confines of  narrow spaces..

The title Wildings comes from what the Urban Dictionary describes as a ‘non word’, slang to describe gangs out to terrorise, though Roy’s Nizamuddin cats live by their own rules and are certainly not out to harm unless they are harmed or hungry, unlike the indoor ferals led by Datura. The story is set in the Nizamuddin area of Delhi and is peppered with familar landmarks, the dargah and the baoli, though perhaps the landscape could have done with more fleshing out instead of being described through the swaying of leaves and the grass in the back gardens.

The text is backed by engaging illustrations by Prabha Mallya that capture Roy’s world without being too intrusive. Simply told, the story is an entertaining romp for fantasy lovers and cat lovers  and a sequel is certainly on the cards.

If you’re planning to purchase Nilanjana Roy’s The Wildings do consider buying it through this Women’s Web affiliate link at Flipkart. We get a small share of the proceeds – every little bit will help us continue bringing you the content you like!

The Hundred Names of Darkness By Nilanjana Roy

Devdutt Pattanaik’s Sita: An Illustrated Retelling of the Ramayana