One & A Half Wife

Meghna Pant’s One & A Half Wife discusses the struggles of people caught in the tug-of-war between old beliefs and new ones. 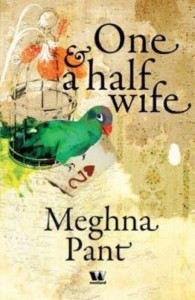 Book review of Meghna Pant's One And A Half Wife

Meghna Pant’s One & A Half Wife discusses the struggles of people caught in the tug-of-war between old beliefs and new ones.

Meghna Pant’s One & A Half Wife is essentially about India, an inflexible India which lives in Tier 2 or even Tier 3 cities. The story is a curious mix of habits steeped in tradition which chains the human spirit, yet tries to break free by living the “Amreekan” dream. The story is of course, set at a time when America was still considered the land of plenty and the only card that separated the haves and have-nots was the colour green. India too, was a different nation, then. Dr. Manmohan Singh was the toast of the nation and not the man we know now. To have lived in India all through the 80s and the early 90’s, was about being aware yet not having the wherewithal to make choices. Almost every aspect of life was tightly defined and tradition allowed very little flexibility. As an act of escapism, it was not uncommon that many Indians nurtured a “foreign” dream.

This is a simple and elegantly written story of a marriage-obsessed Indian family, originally based out of Shimla, who later migrate to US only to find their dream go horribly wrong. The title of the book is unusual, immediately grabbing your attention and the author maintains the mystery about why the protagonist is a one and a half wife, well into the book.

In many ways, this story is also about the great Indian Diaspora and the kind of lives they lead outside (maybe a partial glimpse?). Once they reach the land of their dreams it is all about reinventing themselves and trying hard to find a place in a foreign land. The effort they have to put in, just to be “accepted” is nothing short of Herculean, only to be rudely dismissed at critical junctures in life that “you can never really be one of us,” has left an indelible mark on a whole new generation popularly known as American Born Confused Desi (ABCD). The book addresses this painful aspect, rather beautifully. From language, clothing, dining and social etiquette which Indians are forced to adopt and adapt, a far cry from the years of social conditioning that their roots and popular culture taught them. Needless to say the book may or may not be an all pervasive picture of the lives of Indian Americans settled outside, but between conjuncture and reality it achieves a space that is perhaps believable.

There is humour too in the author’s writing. The cultural difference, especially the crassness of semi-urban folks is depicted through pidgin English and much accentuates the need for “refinement.” After reading the parts, one may need to do a volte-face as to who really needs refinement.

Amongst the various threads that run parallel in the book, divorce, especially from the Indian point of view makes a noticeable highlight. Divorce is taboo even today in India, even if not as overtly as it was in the past, but surely the whispers and the “nudge-nudge, wink-wink” are unmistakable. Pant’s take on this is not only realistic but at times jarring. Pant’s language is easy and ‘nice’, it is bound to find readers since it does not try to impress (at least with the language) but tells a story well. There are places when she raises the bar and adds that twist of philosophy, even as she describes Dua-mama, a much-settled uncle as having “a metallic smell like one handling fistful of coins.” Although, it must be said that her characters are not exceptional and traits shown have all been depicted in popular literature. What makes this book highly readable is the author’s fecundity for writing an interesting narrative with interesting nuggets thrown in for good measure.

It is a trip down memory lane on the vagaries of life, uncertainties of marriage and discovering your roots when life slaps you tight and hard. Sometimes, it is much needed.

If you’re planning to purchase Meghna Pant’s One & A Half Wife do consider buying it through this Women’s Web affiliate link at Flipkart. We get a small share of the proceeds – every little bit will help us continue bringing you the content you like!

Readers outside India can purchase One & A Half Wife through our affiliate link at Amazon.