Next up on our January writing theme's Resolution Story shortlist, is Vinaya’s story highlighting the dark side of new year resolutions. 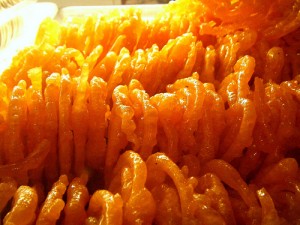 Next up on our January writing theme’s Resolution Story shortlist, is Vinaya’s short story highlighting the dark side of resolutions.

Vinaya Bhagat, in a her own words: I am an IT professional with a passion for writing. In 2008 I completed a creative writing course from United States. In my teenage years I contributed to the English daily “The Hitvada”. I am currently preparing my first novel for submission.

The smell is driving her crazy. Her stride slows in an attempt to prolong the olfactory flirtation. Her stomach rumbles unused to the emptiness. By the third round her mind gives in to the demands of her body and she flops on the stone bench farthest from the tempting smell. But every moment the smell beckons, tempts her with the promise of mouthwatering heaven. Before she knows she is back on her feet walking briskly towards the next bench a little nearer.

This is only the third day since her husband commented that the moon in his house doesn’t seem to wane. Is it her fault that she is overweight? Well ok she knows she has become fat. But that is no excuse to be so insensitive. Anyway it’s not her fault. Who was forcing her to eat more and more? Stuffing her to the point of puking? For them she is nothing but a baby making machine. When they needed her body to bear the child they fed her jalebis and samosas, gulab jamuns and kheer’s, pedha’s and paratha’s. Now even if she takes a second helping of plain rice they frown and jeer at her.

She moves one more bench closer to the cart from where the aroma of hot, crispy jalebis is tempting her. She has no money. Can she buy it on credit, she wonders? The shopkeeper has seen her almost every day of the six months that he has been here. She pauses near the cart, takes a last look at the juicy, orange spirals before turning in the opposite direction towards her house where her sentence will begin again.

Next day she does the three rounds around the park perimeter and once again begins her circuitous journey towards the cart, moving from bench to bench. Today she has brought money but the stall is crowded. She spies her maid among the group and quickly exits the park without a glance at the cart.

Next afternoon she comes early for the walk, timing it so that the vendor is just setting up the shop. She monitors his every move and just as he is lifting the first batch out of the oil she is poised behind him money in hand. She clutches the newspaper wrapped parcel and retreats to the farthest corner of the park to a bench behind the slides. She wants to savour every morsel of the six jalebis but she knows her time is running out. Her mouth burns as the hot syrup floods it. But she has no option but to crunch and swallow. Crunch, crunch, crunch. Swallow.

Now she embarks on her walk like a secret mission. Today the money is secreted in the waistband of her salwar. As she bends to tie her shoelaces the whole world seems to whirl around her. Still gazing at the tiny stars floating around her she walks out of the house. By the time she climbs down the first flight of stairs she is gasping for breath and excruciating pain sears her abdomen; as she slips into oblivion the cries of her baby echo in her ears.

Once again they cut her open, this time to remove the appendix.

It is a month before she returns to the park. A regiment of samosas has joined the jalebis but this time her feet do not falter. Now she skirts the perimeter of the park immune to the sedulous beckoning of the sweet and savoury smells; the desire to regain fitness speeding her feet.