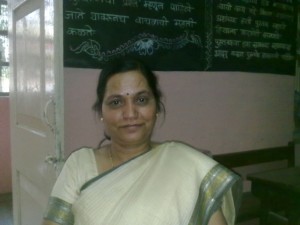 More Than A School Teacher

‘Mangal Madam’ – an inspiring woman who, as a school teacher, helps her students overcome poverty with love and determination.

Anand Koti, Founder of Colorss Foundation, an NGO based out of Pune, emphatically states, “Today it is her energy and hard work that has transformed Ambika into a confident young woman at Wadia college.”

He is talking about Mangal Dhokle, affectionately called ‘Mangal Madam’. A teacher in a government aided school called Gurudev Rabindranath Tagore School in Pune, Mangal was surprised to see a young girl child attend the admission process for the 4th grade with her neighbours, instead of her parents, many years back. Though she was intrigued by the conspicuous absence of the parents, she kept her thoughts to herself. The child, Ambika, proved smart enough to be selected and was admitted to the school.

A few months later, Ambika was missing from a dance rehearsal. Mangal found her crying and withdrawn, not having eaten anything the whole day. After giving her a meal, on gentle questioning she came to know that Ambika was a child from a single-parent household. Her dad had passed away some time back and the grief had affected her mother so badly that she became mentally ill. Neglected and uncared for, Ambika would roam around her slum looking for errands and chores to do in return for food.

Going beyond the role of a school teacher

Mangal was struck by Ambika’s spirit; even at that tender age, she had realized the importance of education and had the courage to apply for for a school admission all by herself. She knew then that here was a person who, if only helped a little along the way, would indeed succeed against all odds and grow up to be a strong and an independent woman. From then on, she decided to go beyond being just a teacher – she became Ambika’s mentor, someone who Ambika considers “her own mother”.

When Mangal understood that Ambika could not concentrate on her studies as she had to work for food, she decided to bring food for her every day. Initially her family and co-workers objected to this, but she persisted. Fearing that Ambika might be subjected to ridicule and teasing if her friends came to know about a teacher bringing her food, Mangal arranged to leave her lunch box at a particular spot – at break time Ambika would collect it from there. Gradually the school management and her family came to accept and appreciate this gesture.

Not wanting Ambika to feel left out, she paid the fees for any extra-curricular activities and even bought her new clothes during festivals. She also reached out to Ambika’s mother, counseling her and discussing with her Ambika’s capabilities, talent and well-being.

At a time, when the teaching profession has taken a backseat, Mangal Dhokle, a teacher for the past 27 years is proud to be one. She feels, “If a doctor does something wrong a patient may lose his life, if a lawyer goes wrong an innocent man might be punished; but if a teacher goes wrong an entire generation is damaged.” Ambika’s is not a solitary case. She has come across several such young children and helped them as much as she could. Seeing past pupils, who were once disadvantaged and poor, well-settled now with respectable jobs, is motivation enough for her.

She says that her inspiration is her mother who, in her own words, “was a very strong woman. She took the decision of sending me to a residential school away from Pune city when I was only 8 years old. The school had hardly any amenities, was isolated and had only tribal children. Looking at my craving for knowledge she took this decision of sending her youngest daughter to a remote place and never let her emotions overwhelm her.”

The story of Mangal Madam and Ambika is truly a ray of hope amidst stories of female infanticides, honour killings and dowry deaths. It shows us that, however small it might seem, each one of us can contribute in our own way towards women’s empowerment and bringing about a positive change in society.

Schools Versus Working Mothers In India

How To Use Parent Teacher Meetings More Productively