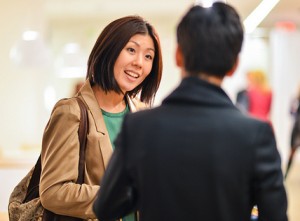 When Women Network: Beyond The Pink Ghetto

When women network with each other, we can benefit from other successful Indian women who want to open doors for us.

When we recently launched the Step Above events for our community of women to network and learn from experts and from each other, one of the things that occurred to me was if we were contributing to the Pink Ghetto.

The term ‘Pink Ghetto’ was originally used to describe relatively lower paying jobs dominated by women, such as secretarial work, which women found it hard to move out of. More recently, it has also been used to describe the phenomenon of women doing start-ups in fields such as fashion, beauty and shopping, seen as ‘lightweight’ or not as ‘serious’ as technology or manufacturing.

Here, I am using it in the sense of women networking with each other.

Do you find that you gravitate to women at networking events? During the break, do you find yourself talking most to the other female attendees? At a recent event for start-ups that I attended, one table almost became the ‘women’s table’. Two women who had arrived together sat there, and soon enough, other female attendees went to it as if propelled by an invisible force.

Getting into the Pink Ghetto can be dangerous because by networking only with women, we may shut ourselves out of ideas and inspiration from the other 50% of the population (and in many industries, men make up more than that).

The value of networking with women

At the same time, women networking with each other can be a phenomenal force for good. One, women’s career paths and concerns can still be quite different from men’s, at least in India. Meeting other women with similar life paths can therefore be an invaluable experience.

Two, women at women only events tend to speak up more and are less worried about appearing incompetent or boastful. In a gathering of women, we tend to be more spontaneous; we don’t wait for permission to speak, we say what we mean and there is an implicit assumption that we will be understood. This is not hard to understand when we think of our socio-cultural context – when ‘good Indian women’ are never encouraged to speak up for themselves, how do women speak up in a general event where they often form 10-15% of the audience? In my experience, and from talking to other event organisers, I can say that women stay quieter when they are a minority, and in most cases, they are. A women only event can offer very useful feedback on your ideas and actions.

In a gathering of women, we tend to be more spontaneous…

Three, we are perhaps the first generation in India where large numbers of women are ambitious about our careers. Yet, many are expected to blunt or at least hide their ambitions post marriage and/or motherhood. Events where we meet and learn with other women are a great way to reinforce our ambitions and see that we are not alone.

Four, successful women today are eager to open more doors for other women and we should all take advantage of this. All this is of course besides the functional value that such events deliver.

At our very first workshop on online marketing for small business owners, I was startled to read the feedback forms offering glowing feedback on the opportunity to network with interesting women, besides their take on the program itself.

This doesn’t mean that women should network exclusively with women; in fact, at any event, we need to step outside our comfort zones and make sure that we talk to different kinds of people. Otherwise, we only reinforce our existing ideas, and fail to come away with inspiration.

This applies as much to a women-only event as to other events.

One of the worst things to do at any seminar or conference is to go in with a friend or colleague and stay rooted to each other throughout the event.

For some Indian women, talking to men (or initiating the conversation) can be harder, depending on the kind of upbringing and work experiences we’ve had. This is one reason why at some events you see the few women attendees clustering together. If this applies to you, it can help to keep an introduction ready, so that you feel more confident about walking up to more people of either sex.

One of the worst things to do at any seminar or conference is to go in with a friend or colleague and stay rooted to each other throughout the event. If you are attending with someone known to you, try and sit at separate tables, or at least, don’t stay together at tea breaks. When you are by yourself, you tend to open more conversations with others, and other attendees too are more likely to come up and chat with you.

Do you enjoy networking with other women? What has your experience been? Do share!

[And don’t forget to check out the upcoming Step Above events in August – we have coming up a workshop on freelance writing career opportunities in Bangalore.]

How Not To Network